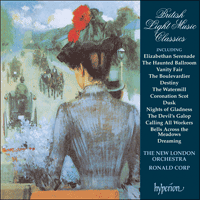 Britain has a fine tradition in the creation of quality light music—music of the sort that plumbs no intellectual or emotional stimulation, but lifts the spirits with ingratiating melodies decked out with consummate craftsmanship. In this collection are gathered some of the classics that the genre has produced over a period from Victorian times to the second Elizabethan age.

Seventeen tracks of music universally recognizable: many of the pieces have introduced television and radio broadcasts for years: Calling All Workers (Music While You Work); Devil's Galop (Dick Barton—Special Agent); The Old Clockmaker (Jennings at School); Coronation Scot (Paul Temple Detective Series); Puffin' Billy (Children's Favourites); The Watermill (The Secret Garden). The disc also includes Jumping Bean, claimed to have been used as a signature tune around the world more times than any other piece!

‘For light music specialist and general music lover alike, this collection should prove pure delight’ (Gramophone)
‘Music that will make older readers revel in nostalgia and younger listeners discover an abundance of charming tunes that will spin around in their heads for days … an entrancing collection packaged in warm, ravishing sound’ (BBC Music Magazine)
‘The noble but under-rated tradition of British light music played to the manner born by Corp and his band who, if anything, improve on the original recordings’ (Classic CD)
'Espléndido disco' (CD Compact, Spain)

Britain has a fine tradition in the creation of quality light music—music of the sort that plumbs no depths of intellectual or emotional stimulation, but lifts the spirits with ingratiating melodies decked out with consummate craftmanship. In this collection are gathered some of the classics that the genre has produced over a period from Victorian times to the second Elizabethan age.

The earliest piece in the collection is the lilting Pas de quatre by Wilhelm Meyer Lutz (c1829–1903). Lutz was born and educated in Münnerstadt, near Kissingen, Bavaria. He came to England in 1848 and, after various posts as an organist, began a career as musical director in London theatres. From 1869 he was the musical director at the Gaiety Theatre, composing songs and dances for numerous shows there. Among them was the rhythmically engaging Pas de quatre which appeared in the burlesque Faust Up to Date (1888). It gained immense popularity, the more so for the fact that its tune fitted the steps of the barn dance, which had just then been imported from America into British ballrooms.

The years immediately before the First World War were especially rich in British waltzes. The appropriately named slow waltz Dreaming (1911) is by Archibald Joyce (1873–1963), a Londoner who conducted a popular society dance band and became known as the ‘British Waltz King’. Several of his waltzes achieved international success, this being the best known.

Destiny (1912), distinguished by its elegant cello main theme (a favourite of John Barbirolli who played it as a cello solo at Hallé balls), is by another Londoner who likewise composed several waltz successes. Sydney Baynes (1879–1938) was an accompanist, organist and choir­master before becoming chorus master at Drury Lane Theatre. From 1910 to 1914 he was musical director for John Tiller’s troupe of dancing girls at the Palace Theatre, and it was for them that he composed the melody that he developed into this celebrated waltz.

The swirling Nights of Gladness (1912) is by Charles Ancliffe (1880–1952), an Irishman from Kildare who served for some years in India as Bandmaster of the South Wales Borderers. It was one Christmas Eve, on returning home from service in India, that he composed this waltz, the best known of many superbly crafted dances, marches and novelty pieces from his pen.

Albert William Ketèlbey (1875–1959) occupies his place in British musical history for a particularly distinctive body of ‘narrative music’. Far from creating anything specificially British, Ketèlbey sought a peculiarly exotic sound in works such as In a Monastery Garden (1915), In a Persian Market (1920), In a Chinese Temple Garden (1923) and In the Mystic Land of Egypt (1931). In his Bells Across the Meadows (1921) we hear distant church bells introducing a typically broad Ketèlbey melody into which they cleverly blend. Ketèlbey was born in Birmingham, was educated at Trinity College, London, and was a church organist and theatre conductor before establishing his reputation with his famous body of compositions.

Far more specifically British was the work of the undisputed king of British light music, Eric Coates (1886–1957). A native of Hucknall, Nottinghamshire, he began as an orchestral violist before beginning to make his name with well-crafted songs and some most elegant and tuneful orchestral suites and other pieces of light music. Many of these gained familiarity as signature tunes during the heyday of radio, as was the case with the war­time march Calling All Workers (1940) which was for many years the signature tune of the radio programme Music While You Work. The tune was chosen very carefully from many among others for its tempo. The idea was not only to cheer people up in the war factories but also to pace their work—they worked faster because of the speed of the music.

For some composers, light music was no more than a sideline. Such was the case with Cecil Armstrong Gibbs (1889–1960) who composed much vocal, choral, stage, chamber, instrumental and orchestral music, including three symphonies. The slow waltz Dusk appears in his Dance Suite Fancy Dress (1935), and became widely popular during the 1940s when recorded in a string arrange­ment by orchestra leader Jay Wilbur.

Winchester-born Geoffrey Toye (1889–1942) was primarily a conductor of symphony concerts, opera and ballet. It was in this last capacity that he composed the music for two ballets choreographed by Ninette de Valois. One of these was The Haunted Ballroom (1935), the waltz from which became immensely popular. Likewise Anthony Collins (1893–1963), a native of Hastings, was a conductor of ‘serious’ music who recorded much music by Elgar, Vaughan Williams and others, and whose early ‘long-playing’ recordings of Sibelius symphonies are still highly treasured. Besides symphonies, concertos and operas, Collins also composed film and light music, from which the gently dancing Vanity Fair is his acknowledged masterpiece.

Charles Williams (1893–1978) was born in London and was a violinist in concert, theatre and cinema orchestras before becoming a musical director in theatres and cinemas. This film experience led to him composing and scoring for many Gaumont–British films, of which his Dream of Olwen for the 1947 film While I Live became a classic. He also composed and conducted a wealth of short ‘mood’ pieces for the Chappell Recording Library. Many of these gained wide familiarity through their use as radio and television signature tunes. Such was the case with the two pieces here, the suitably sinister Devil’s Galop being used as signature tune for the radio serial Dick Barton—Special Agent and The Old Clockmaker for Jennings at School.

Frederic Curzon (1899–1973) was another who pro­duced some particularly well-crafted light music. London-born, Curzon studied violin, cello, piano and organ, became pianist in a London theatre orchestra, and by the age of twenty was conducting and composing for silent films. He eventually became the head of the light music department of the publisher Boosey & Hawkes, for whom he composed his most successful compositions. Of these, The Boulevardier (1939)—a jaunty portrayal of a Parisian man-about-town—became especially well loved.

One of the outstanding British theatre composers of the twentieth century, Vivian Ellis (1903–1996) is known primarily for shows such as Mister Cinders (1928) and Bless the Bride (1947). Following in the musical footsteps of a grandmother composer and violinist mother, he took up the piano before concentrating on popular song composition for the theatre. Later he also entered the field of ‘mood’ music. It was in 1938, while travelling by train between his homes in Somerset and London, that he conceived his portrayal of a steam train in full flight, Coronation Scot. Its popularity came about when it was chosen as the signature tune for radio’s ‘Paul Temple’ detective series.

The locomotive depicted in Puffin’ Billy by Edward White (1910–1994) was of altogether more modest pretensions. It was while on holiday in the Isle of Wight that White saw some ancient steam engines that chugged along country branch lines, one of them bearing the name ‘Puffin’ Billy’. The chirpy composition which it inspired became familiar during the 1950s when it was adopted as the signature tune for the Saturday morning radio programme Children’s Favourites. Largely self-taught, White was born in London and became a dance-band violinist and arranger in his home city, besides directing a ballroom orchestra in Bristol after the Second World War.

Ronald Binge (1910–1979) was born in Derby and worked his way from a position as cinema organist, orchestral pianist and piano-accordionist to arranger for the Mantovani Orchestra. As such he evolved the ‘cascading strings’ effect for which Mantovani became famous. A serious student of orchestration, Binge also experimented to good effect in his own compositions. Elizabethan Serenade (1951) builds two light but contrasted melodies upon an insistent rhythmic bass. The piece was introduced in a broadcast by the Mantovani Orchestra, became more widely known through its use as a radio signature tune, and went on to achieve popularity around the world. The Watermill (1958), another pastoral piece by the same composer, is written for oboe and strings and was used as the signature tune for the BBC television series The Secret Garden.

The doyen of latter-day British light music composers is Robert Farnon (1917–2005). Born in Toronto, Canada, he learned a variety of instruments and became dance band trumpeter and arranger, besides having two symphonies performed. It was as the conductor of the Canadian Band of the Allied Expeditionary Forces that in 1944 he came to England where he became a prolific arranger, composer and conductor, directing the backing orchestras for a range of front-rank recording artists. Many of his compositions have become international light-music classics, among them the jaunty Jumping Bean which is claimed to have been used as signature tune around the world more times than any other piece. Certainly it exemplifies as well as anything the charac­teristic of so many of these light-music classics that the title and composer may mean little but the piece itself is instantly and gratifyingly familiar.