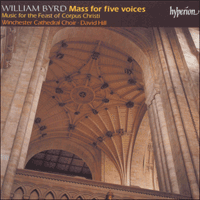 with Propers for the Feast of Corpus Christi

William Byrd, together with Thomas Tallis as the joint holders of the Royal monopoly for printing music, was given free rein to compose sacred music for the Roman liturgy despite Elizabeth I being in principle opposed to such practice. The resulting works are masterpieces of the age, and the Mass for five voices, with its unashamedly Catholic presentation of the words, is the last and most beautiful of the three settings he made of this text.

The Mass is here presented in a 'liturgical' setting with the Propers for the Feast of Corpus Christi. Also included are six further works with connections to this period of the church's year.

As the reign of Elizabeth I symbolizes the Renaissance of English humanism and the stability of English culture, so William Byrd, in his assimilation of musical ideas past and present, represents the technical and emotional refinement of the music of the Latin church. However, we are presented here with a curious paradox, for Byrd lived at a time when music for the Latin rite was outmoded, its creation and promul­gation considered dangerous in the hothouse of Elizabethan church politics. England’s Golden Age of polyphony under the earlier Tudors could boast some of the finest composers in Europe, who had thrived within a musical tradition unbroken until the introduction of Protestant ordinances in the mid 1530s and 1540s. As a boy Byrd came to know intimately the liturgy of the pre-Reformation English church, knowledge which must have left a lasting impression on his later musical character as a recusant Catholic. (The general assumption that the composer was born in 1543 has been disproved thanks to ground-breaking scholarship of recent years. Byrd was significantly older when he died than had been previously thought, a finding which invites a complete reassessment of his life and the context of his works.) Apart from Mary I’s brief Catholic revival in the 1550s, elaborate music-making exemp­lified in the great surviving pre-Reformation choirbooks such as Eton, Lambeth and Caius was banned from all English churches, collegiate and monastic; by the end of the 1540s, and with the death of Henry VIII, Latin church music was replaced by a simplified vernacular version of the liturgy, and the English anthem and service were born.

It has been a great concern of scholars to account for the prodigious number of Byrd’s surviving Latin works when, by Elizabeth’s own proclamations, it would have been illegal to perform them in his own time. However, Elizabeth herself was an accomplished musician who held deep Catholic sentiments and Byrd was indeed among her favourite musicians. Byrd studied under Tallis and would doubtless have been familiar with the works of a number of pre-Reformation composers such as Cornysh and Fayrfax; he probably also had regular access to his patron John Lord Lumley’s extensive collection of printed foreign editions at Nonesuch Palace from which to gain new ideas. As, then, the most promising composer England could boast it is perhaps fair to suggest that Elizabeth was quite happy to grant him unlimited freedom of musical expression. In 1575 Byrd, with Tallis, gained a monopoly on music printing in England. Elizabeth granted full privilege and licence for twenty-one years ‘to imprint any and so many as they will of set songe or songes in partes, either in English, Latine, … or other tongues that may serue for musicke either in Churche or chamber’. Byrd therefore had royal approval to compose and print what he desired without persecution. Upon Tallis’s death ten years later, Byrd retained this privilege and produced several editions of his own works.

Byrd’s three settings of the Mass Ordinary (for three, four and five voices) are widely known and do not require substantial elaboration here. All were published in the mid 1590s, and it is generally agreed that the Mass for five voices (arguably the most beautiful of the three) was the last to be composed. It is not surprising that stylistically Byrd broke from the great tradition of pre-Reformation English Mass settings, following a fallow period of some forty years in this genre. In the Mass for five voices thematic connections between the movements rarely exist; although a head motif launches them in a similar fashion, thereafter the style is governed largely by the text, rather than developing musical ideas and cross-reference such as may be found in the Masses of Ludford and Fayrfax. Most notable are those portions of the text which prominently profess the Catholic faith, through which we might read Byrd’s own particular and profound identification. In the Credo, for example, we hear the words ‘Et unam sanctam catholicam et apostolicam ecclesiam’ boldly iterated, whereas in earlier English Mass settings the words ‘Jesu Christe’ are normally emphasized.

Byrd’s greatest achievement in music publishing was his ambitious two-volume collection of the Gradualia, which contain settings of Mass Propers for the church year. It is not known whether these works were intended to be performed in a liturgical framework, or indeed along with any of Byrd’s own Mass settings as presented on this recording. In the political climate of the time it is unlikely that they would have been performed by the Queen’s Chapel Royal, of which Byrd was a member from 1570; this leads to the supposition that they were designed for use in the chapel of a recusant household. Such households may well have been able to maintain a choir capable of meeting the extreme technical demands of the Gradualia, but it is likely that Latin music of the time was performed by small forces—even as few as one to a part—with a female voice singing the top line. However, this does not preclude the possibility that the sound Byrd himself imagined was that of his own choir of the men and boys of the Chapel Royal, had political circumstances permitted.

Byrd’s Propers for the Mass of Corpus Christi are published in the first book of the Gradualia (London, 1605), where the Magnificat antiphons O sacrum convivium and O quam suavis est are also found together with the Hymns to the Blessed Sacrament Ave verum corpus and O salutaris hostia.

The Feast of Corpus Christi commemorates the institution and gift of the Holy Eucharist, traditionally celebrated in the Western Church on the Thursday after Trinity Sunday. (In the early church this commemoration was held on its natural day in the Christian calendar, Maundy Thursday, on which the Eucharist was instituted at the Last Supper; however, in reserving this day as part of the Passion ceremonies, a new feast day was recognized in 1264 and set on the first free Thursday after Eastertide.) The texts reflect a sacrificial tone as befits the Corpus Christi celebrations, embodying the imagery of the ingestion of blood and body. As the medieval symbol of the Body of Christ illustrates, the mother Pelican’s beak penetrates her own breast, giving life-blood to benefit the hunger of her young. Ironically, Byrd chose the bright and cheerful mixolydian mode for his setting. The Introit Cibavit eos is delightfully radiant, and celebrates the biblical miracle of wheat and honey from the rock. Here the antiphon is followed by a Psalm verse (80:1) for reduced voices, and an energetic and semi-homophonic setting of the doxology (‘Gloria Patri’) with a deliberate break before the ‘Sicut erat’, quite typical in Byrd’s Introit settings. As the liturgy would dictate, the antiphon is repeated at the end of the work (although this is not directed in the printed sources).

The Gradual Oculi omnium is a reposed petition for the blood and flesh of Christ, which is anticipated in the beautiful three-part verse ‘Aperis tu manum tuam’ with the appended Alleluia ‘Caro mea’, and finally resolved when the four-part texture resumes with vigour at the words ‘qui manducat meam carnem’. In English music of this period it is unusual to find such direct expression of the dramatic implications of the text. Throughout the Gradualia Byrd’s response is typically eloquent and powerful, from the short and simple Offertory Sacerdotes Domini (considered by many to be the gem of the Corpus Christi Mass), to the more robust and almost madrigalian setting of the Communion Quotiescunque manducabitis.

Additional Propers for the related Votive Mass of the Blessed Sacrament are printed in the second book of the Gradualia (London, 1607), which additionally contains the Processional Hymn Pange lingua gloriosi (Byrd’s setting is not included on this recording but is sung to plainchant, as is the Corpus Christi Sequence Lauda Sion salvatorem) and the Benedictus antiphon for Lauds Ego sum panis vivus. (Owing to repeated reference to the Eucharist, the Corpus Christi Mass texts are appropriate for inclusion in the Votive Mass of the Blessed Sacrament.) The Tract Ab ortu solis would have been sung if the Votive Mass fell during the penitential season, and the Alleluia ‘Cognoverunt discipuli’ only in Paschal Time. However, these items are nevertheless related thematically to Byrd’s Corpus Christi Mass. The second half of the Alleluia actually restates the music of ‘Caro mea’ from the Gradual Oculi omnium, while the second part of the Tract (‘Venite, comedite’) is structurally very similar to the Introit Cibavit eos. (Several items in the Gradualia are repeated within the same feast or even from one feast to another, no doubt for economical considerations.)

Perhaps the most popular and widely performed of all Byrd’s compositions is the exquisitely understated Ave verum corpus. Written in G dorian against the mixolydian Propers it is an almost unique example of modal mismatch in the Gradualia. As befits Byrd’s earlier devotional motets for penitence Ave verum corpus contains intense homophonic statements coupled with lucid counterpoint (most notably at the plea ‘miserere mei’), which suggests that the work may significantly predate its publication. The lesser-known companion Hymn O salutaris hostia is also thought to be an early work. Here Byrd fully exploits his technical mastery of interlocking imitative phrases; the polyphony gradually intensifies and with the words ‘bella premunt’ climaxes with trumpet-like entries.