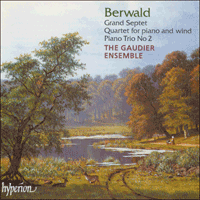 1996 sees the 200th anniversary of the birth of Franz Berwald (a respected orthpaedic therapist and a tile-and-brick factory manager as well as the foremost composer from Sweden). This recording, the first in a projected series of Berwald's considerable chamber output, includes the Grand Septet (1828), one of his most delightful pieces and one which already shows early signs of the radical forward thinking which was to find its most obvious expression in the Sinfonie singulière (recorded on CDD22043).

The Quartet for piano and wind is a much earlier work and its formal structure owes much to the influence of Hummel, Weber and Spohr. The second Piano Trio, on the other hand, dates from 1851 and the writing is full of original touches and rhythmic vitality, the placid Mendelssohnian surface being disturbed by all sorts of characteristically Berwaldian flourishes.

‘It is all hugely enjoyable and well recorded, with very present and finely detailed sound. Recommended with enthusiasm’ (Gramophone)
‘Delightful performances on which it would be difficult to improve, and excellent recordings too’ (The Penguin Guide to Compact Discs)
‘This is very fine chamber music playing indeed. Delightful music played in exactly the right spirit’ (Classic CD)
«Superbe» (Diapason, France)