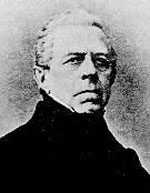 born: 23 July 1796
died: 3 April 1868
country: Sweden
Berwald is now recognised as possibly Sweden’s greatest composer. He came from a family with four generations of musicians; his father, a violinist in the Royal Opera Orchestra, taught young Berwald the violin from an early age. He soon appeared in concerts. In 1811, Karl XIII (brother of Gustavus III) came to power and reinstated the Royal Chapel; the following year Berwald started working there, as well as playing the violin in the court orchestra and the opera, receiving lessons from Edouard du Puy. He also started composing. The summers were off-season for the orchestra, and Berwald travelled around Scandinavia, Finland and Russia. Of his works from that time, a Septet and a Serenade he still considered worthwhile music in his later years.

In 1911, Carl Nielsen wrote of Berwald, "Neither the media, money nor power can damage or benefit good Art. It will always find some simple, decent artists who forge ahead and produce and stand up for their works. In Sweden, you have the finest example of this: Berwald." More recently, British musicologist Robert Layton wrote (1959) what remains the sole English-language biography of Berwald, as well as discussing Berwald's music in considerable detail elsewhere.