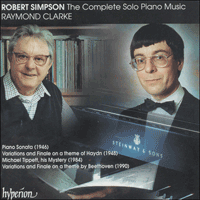 Issued to celebrate the seventy-fifth birthday of Robert Simpson on 2 March 1996.

This, the seventeenth issue in the Hyperion cycle of the works of the prolific composer Robert Simpson, features all of his works for solo piano. The programme opens with the Sonata from 1946. This is Simpson's first published work and already shows traces of that large-scale organization of tonality which so characterizes his output.

The Variations on a theme of Haydn takes the palindromic theme from Haydn's Symphony No 47 (also found in his piano Sonata No 41 and Simpson's own ninth String Quartet) and is a fascinating exercise in the rhythmic structure of music as well in basic tonality.

Written for a symposium celebrating the life and works of Tippett, Michael Tippett, his mystery was first performed in 1993 by the soloist on this recording, Raymond Clarke, for whom Variations on a theme of Beethoven was also written (Simpson having heard the pianist give an impressive performance of Beethoven's Opus 111). Here the theme is a little-known miniature inscribed by Beethoven in a visitors' book in 1825. Simpson's work is similarly a triumph of organization in miniature.

‘Characteristically rugged and uncompromising, but with touches of fantasy, visionary inwardness and wit. This is music that nourishes the soul’ (Gramophone)
‘Gripping works … Raymond Clarke is the ideal advocate’ (BBC Music Magazine)
‘I am reeling from having listened to this disc. These three major works and a little miniature have all the Simpson features that his symphonies and string quartets revealed: intellectual rigour, dazzling but controlled powers of imagination, and, overall, a craggy grandeur. The Variations, with its enigmatically soft ending, should have you on the edge of your seat. This is a marvellous addition to Hyperion's pioneering series’ (Classic CD)
‘Here is music of enormous power and inimitable character, performed with immense authority and understanding. Admirable sound. A very strong recommendation’ (Hi-Fi News)
‘An advocate of rare intelligence … this is an extremely valuable addition to Hyperion's still-expanding Simpson discography. The recording is simply superb, and Raymond Clarke's accounts almost beyond praise in their penetration, technical command and diablerie (listen to the sulphurous ending of the Beethoven Variations)’ (Tempo)