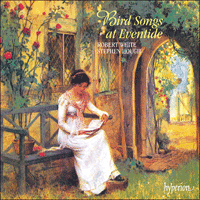 ‘If these ardent renderings … do not find a place in your heart then you should wonder what your heart's made of’ (Classic FM Magazine)
‘Hyperion are to be congratulated on their courage in issuing this charming collection of songs which might be classified as an endangered species. Warmly recommended’ (British Music Society Journal)

Stephen Hough writes …
These songs, lovingly selected by Robert and myself from hundreds of others, share an ‘Edwardian’ identity—dating from the late Victorian years when Edward VII was waiting in the wings, to the decade or so following his death, when the wings themselves were a memory, having been destroyed in The Great War.

The songs come from a tradition where emotions were not trivialized, and so could be sung about without shame or embarrassment. Although the tears admittedly had some sugar mixed with the salt, they could be freely shed until the adolescent 1920s made crying unfashionable. This change of fashion was not without some justification though; it was difficult to create tragic fiction when in wardrobes across the land there hung the fading clothes of millions of men—casualties not of changing fashion but of their owners’ bodies lifeless in the fields of Flanders, stained by the dye of mud and blood.

There is a profound nostalgia and a deep-rooted conservatism in this repertoire. ‘That is no country for young men!’ The young leave home, whereas these songs call us home, to take shelter from the storms of change, and to take refuge from the thundering race of Time. The nostalgia is a longing, too, for a lost cultural home, decaying with Edward VII, destroyed with George VI.

We cannot make fun of these songs when we perform them or listen to them. The slightest cynical smile or amused, knowing glance will destroy their magic completely. They are shy of the modern age. Rather we have to enter their world with respect and affection—a gentler world which the twentieth century did, in a sense, leave behind. If we do this, a great surprise can occur. We may discover that this world, with its poignant, searing emotions, is not so alien after all, but is, in a strange way, our home.

Robert White writes …
When I met Stephen Hough in New York in the mid-eighties I was astonished to find that this distinguished young solo pianist was so in tune with the beautiful English ballads of the late nineteenth and early twentieth centuries—songs I had been singing all my life. We began to perform this repertoire together. I found it a joy to work with such a gifted pianist who, having grown up in England, understood the style of this music on a deep emotional level. When word came that Ted Perry was interested in our making an album of these songs for Hyperion we jumped at the opportunity.

We originally thought of limiting the selection to English songs written in the Edwardian era of 1901 to 1910 but, as we examined numerous works, we realized that the basic style and feelings expressed in this rich repertoire extended well beyond Edward VII’s reign. As a result, we expanded our time frame backwards and forwards, from The Lost Chord—written in 1877—to Song to the Seals—written in 1930. For the same reasons, we chose several American songs and one Irish piece, as well as a work by a French composer, for inclusion in this album.

What makes these songs so special? The vocal demands are sometimes operatic in scope—in their heyday, the general public did not make such a distinction between ‘popular’ and ‘classical’ voice production—and the melodies and harmonies were crafted by excellent musicians who cared about creating beautiful musical vehicles of human emotions. For me the songs represent a treasure of lyrical expression in the English language which is all but lost today.

Having read the above, Ted Perry is moved to write …
This CD contains some of the most famous and once-popular songs in the English language. Can there be anybody who does not know Bless this House and The Lost Chord? In fact these two songs are so well-known that nobody seems to want to listen to them nowadays, since they express sentiments too overt and fulsome for our cynical and hard-headed age. They’re redolent of a period long past, with no relevance to the present day. They’re songs our grandparents used to know and love. At least mine did.

When Robert and Stephen suggested making a CD of some of these favourites of yesteryear I immediately said yes. I wouldn’t have said it so readily had anybody else suggested it, but knowing Robert’s way with this repertoire I knew that if anyone could re-present some of these fading pages to a modern audience without producing a scornful response, he could—especially with the remarkable keyboard companion he has in Stephen. So they sent me a list of candidates for the programme.

I recognized many old favourites: Bird Songs at Eventide by that delightful composer Eric Coates; Haydn Wood’s Roses of Picardy from the time of World War I—surely another of those songs known to all, as is Somewhere a voice is calling and, maybe, Little grey home in the West. At Dawning I didn’t recognize by title but hearing it I remembered it as ‘I love you’.

There were many songs in the list which were unknown to me, so I’ve made a few discoveries. I specially liked Duna. (Where is Duna? Is it a real place? I don’t know.) Chadwick’s Allah I also thought much too good to be forgotten. Bantock’s Song to the Seals was known to me by name, but I’d never heard it.

So here they are. Twenty-five songs from a time when the world was quite different from what it is today, but songs much too good to be allowed to disappear from our heritage—and in Robert and Stephen’s voice and hands here presented as perfectly as they ever could be.