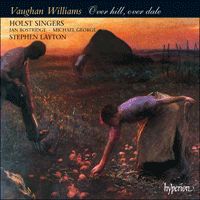 Over hill, over dale

Vaughan Williams’s small-scale choral works are a comparatively lesser-known aspect of his art. The majority of these compositions arose from his folksong-collecting activities at the turn of the century; this recording brings some of his finest folksong arrangements together with other a cappella works. They cover the whole of the composer’s long career. The Holst Singers are the foremost amateur choir in London. Under their musical director Stephen Layton they regularly perform on Radio 3 and Classic FM and in the major concert venues. The choir is joined for several songs by the renowned soloists Ian Bostridge and Michael George.

Vaughn Williams's small-scale choral works are a comparatively lesser-known aspect of his art. The majority of these compositions arose from his folksong-collecting activities at the turn of the century; this recording brings some of his finest folksong arrangements together with other a cappella works. They cover the whole of the composer’s long career—from The Willow Song, written when he was eighteen, to Heart’s Music, composed three years before his death at the age of eighty-six.

The Willow Song and O Mistress Mine (setting well-known texts from Shakespeare’s Othello and Twelfth Night respectively) were published in 1913 as the second and third of ‘Three Elizabethan Partsongs’; however, they date from 1891, composed while Vaughan Williams was studying with Parry at the Royal College of Music. After gaining a BMus at Cambridge, he returned to the College in 1895 for further composition studies with Stanford; the following year the first of the group, Sweet Day (to words by George Herbert), was written. Scored for mixed voices, these part-songs show charm, but little sophistication in the choral writing. Nevertheless their simple, diatonic harmony is far removed from the rich chromaticism of the day and points to the mature composer. The singing of part-songs and madrigals was a popular pastime of the period, and both Rest and Come away, death were conceived with this market in mind. Rest (composed in 1902 to a poem by Christina Rossetti) was dedicated to ‘Members of The Magpie Madrigal Society’, while a further Shakespeare setting, Come away, death (1909) is described as a ‘Madrigalian Part-Song’. The harmonic archaisms of the latter were doubtless a conscious conceit on Vaughan Williams’s part considering the genre; however, more significantly, they reflect too the absorption of seventeenth-century influences into his own style.

Another crucial influence on Vaughan Williams’s developing voice—English folksong—had been playing its part since 1893 when he found the song Dives and Lazarus in a collection entitled ‘English Country Songs’ published that year. As he wrote in his essay A Musical Autobiography (1950), ‘I had a sense of recognition—“here’s something which I have known all my life—only I didn’t know it!”’. In the article ‘English Folksongs’ (1912), he gave his definition of a folksong as ‘a series of individual variations on a common theme … a folksong is like a tree, whose stem dates back from immemorial times, but which continually puts out new shoots … In one aspect the folksong is as old as time itself; in another aspect it is no older than the singer who sang it’.

The gathering of folksongs and dances began in the middle of the nineteenth century and led to the foundation of the Folk Song Society in 1899. The movement gathered momentum through the zeal of Cecil Sharp who, realizing that the oral tradition was rapidly dying out, determined that it was essential to collect the songs urgently before they were lost for ever. The first folksong Sharp collected was The Seeds of Love, sung to him in September 1903 by John England as he mowed the vicarage lawn in the Somerset village of Hambridge. Vaughan Williams also collected two variants of it in Suffolk and Essex under the titles of ‘The Red Running Rue’ and ‘The Sprig of Thyme’ respectively; his arrangement for male voices dates from 1923. His own first experience of collecting took place at Ingrave, Essex, three months after Sharp’s. He had been lecturing on folksong in Brentwood and after the lecture he was approached by two sisters who told him that their father, the vicar of Ingrave, was holding a tea-party for elderly residents from the village. Perhaps, they suggested, these old people might know some songs. Although none volunteered to sing at the party, Charles Pottifer, a shepherd, agreed to meet Vaughan Williams the following day; consequently on 4 December the haunting song Bushes and Briars was saved for posterity. Five years later the composer made his arrangement for male voices.

From there on Vaughan Williams became an avid collector, notating over eight hundred songs during the next decade. The discovery of what he described as the ‘intrinsic beauty’ of folksong profoundly affected his own compositions; folksong became a liberating force, showing him a path to develop his own musical personality. As he summed it up in A Musical Autobiography: ‘If a composer can, by tapping the sources hidden in folksong, make beautiful music, he will be disloyal to his art if he does not make full use of such an avenue of beauty’. The tales the singers sang to Vaughan Williams, Sharp and other collectors were many and varied: stories of loves lost and found, of desertion, death, crime, betrayal, bold deeds, ghostly apparitions, customs, the cycle of the seasons and the pattern of the daily round, on land and sea—the very stuff of human life. This is what we hear in the ‘Five English Folksongs’. Composed in 1912 for mixed voices, they represent a high point in Vaughan Williams’s folksong arrangements. He described them as ‘freely adapted’ from the original songs; indeed they are compositions in their own right rather than simply arrangements, for the vocal writing is masterly with subtle, evocative textures that underpin and heighten the words.

The Dark-eyed Sailor was another gem rescued by Vaughan Williams on his first foray on 4 December 1903 when it was sung to him by Mrs Horsnell and her daughter. The song is also known as ‘Fair Phoebe’ and he collected it a further four times in Norfolk, Surrey and Dorset. The Spring Time of the Year mixes images of spring and yearning young love with a solo tenor highlighted against the other voices singing chords with closed lips. In Just as the tide was flowing (a folksong which Sharp collected in Somerset, but which Vaughan Williams also notated three times in Norfolk) the composer takes the word ‘flowing’ and turns it into a watery, cascading image. The Lover’s Ghost (also known as ‘The Suffolk Miracle’, ‘The Grey Cock’, and ‘The Drowsy Sleeper’) is the finest of the group; subtitled ‘Well met, my own true love’, it rises to a passionate climax through superb part-writing that rivals the seventeenth-century madrigalists whom Vaughan Williams venerated. The verve of the Wassail Song provides not only a brilliant foil to the intensity of the previous song, but also a vivacious conclusion to the set. Vaughan Williams collected the tune in Herefordshire from Mr Dukes of Pembridge in 1909. Wassailing was a West Country custom that took place on 5 January (the eve of the Epiphany) when libations would be offered to the apple trees. (The word itself is of Saxon origin meaning ‘good health’.) The revellers are heard at first from afar, and after offering their toasts in ebullient (and doubtless liquid) good humour they disappear over the fields and orchards, their voices fading into the wintry night.

Although Vaughan Williams was almost exclusively interested in English folksongs and did no collecting north of the border, he made several mixed-voice arrangements of Scottish traditional melodies. Of these Loch Lomond (1921), and Ca’ the yowes (1922, a setting of Robert Burns), have become justly popular. Alister McAlpine’s Lament (1912), with words by Robert Allan, however, is a rarity; Vaughan Williams’s source was R A Smith’s The Scottish Minstrel, published between 1820 and 1824. Of the other mixed-voice arrangements represented, Mannin Veen (1912) has a Manx melody and words (performed here in the English translation) which Vaughan Williams found in Dr Clague’s manuscript collection, whilst An Acre of Land (1934) was sung to the composer by Frank Bailey in Combe Bissett, Wiltshire, in 1904. The curvaceous melody of The Turtle Dove (1924) was collected by him twice in Sussex during November 1904, from Mrs Verral of Horsham and Mr Penfold of Rusper. Also known as the ‘True Lover’s Farewell’ the bird is personified as a symbol of faithfulness. Finally a song which is not strictly speaking a folksong but one that has survived in both the oral tradition and in print for over four hundred years, Greensleeves. In 1580 it was referred to as ‘A new Northern Dittie of the Lady Green Sleeves’; it was published in William Ballet’s Lute Book of 1600 and included in the seventh edition of Playford’s The Dancing Master. Vaughan Williams incorporated it within his opera Sir John in Love (1924–8) and made this choral arrangement in 1945.

As is evident in the settings of The Seeds of Love and Bushes and Briars, the dark, ebony-hued texture of male voices appealed greatly to Vaughan Williams. One more example is the ravishing setting of The Winter is gone (1912), a further evocation of the dual blossoming of nature in spring and youthful emotions. For the final two verses he used words from the version of the song that Sharp had collected in Somerset. Men’s voices were also particularly apposite for nautical arrangements considering the male domination of ships’ crews, as in the shanty-like version of the old English air Down among the dead men (1912).

Vaughan Williams’s admiration for the poetry of the seventeenth century remained with him throughout his life; in the early fifties he wrote his finest music to Shakespeare as well as an elusive, rather mysterious response to Thomas Campion’s Heart’s Music (1954). Its chorale-like opening with chill, bare harmonies recalls the Sinfonia antartica (1949–52) and is alternated with a rocking medieval-like melody. The ‘Three Shakespeare Songs’, composed as he was entering his eighth decade in 1951, are miracles of compressed musical expression. Full fathom five (from Act I, Scene 2 of The Tempest) portrays the eerie subterranean bells tolling their requiem for the lost mariners, with strange harmonies emphasizing their ‘sea-change’ metamorphosis. Even more powerful is the second, The Cloud-capp’d towers, Prospero’s great speech from Act IV, Scene 1 of the same play, where the opening chords seem to be suspended, floating in the air, as they conjure images of towers, palaces, temples and ‘the great globe itself’. Realization of mankind’s insubstantial nature and, in the context of time, inconsequential existence, is brought home by a hushed, disembodied chordal procession at ‘We are such stuff as dreams are made on’. This vein of intensity is blown away in Over hill, over dale, from Act II, Scene 1 of A Midsummer Night’s Dream; a nimble, gossamer scherzo, as fleet as Puck himself.