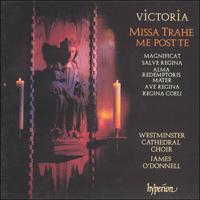 ‘Stunning examples of Victoria's most expressive and dramatic writing … having just listened to this recording again my ears are ringing and my heart is uplifted: a perfect tonic for the bleaker part of winter’ (Gramophone)
‘A fervent sigh at the serenity and sheer beauty of it all’ (Choir & Organ)
'Assolutamente riuscito, assolutamente strepitoso, assolutamente unico' (Musica, Italy)

Tomás Luis de Victoria, the greatest composer of the Spanish sixteenth-century ‘golden age’ of polyphonic music, was born in Avila in 1548 and in about 1558 became a choirboy in Avila Cathedral, where he received his earliest musical training. When his voice broke he was sent to the Collegium Germanicum at Rome where he was enrolled as a student in 1565. He was to spend the next twenty years in Rome and he occupied a number of posts there of which the most important were at S Maria di Monserrato, the Collegium Germanicum, the Roman Seminary (where he succeeded Palestrina as maestro di cappella in 1571) and S Apollinare. In 1575 he took holy orders and three years later was admitted to chaplaincy at S Girolamo della Carità. Around 1587 he left Italy and in that year took up an appointment as chaplain to the dowager Empress María at the Royal Convent for Barefoot Clarist Nuns, where he acted as maestro to the choir of priests and boys.

Victoria’s musical output was relatively small compared with other major Renaissance composers such as Palestrina (who published five times as much music) and Lassus (who published even more), and he published no secular music. The music he did publish, however, generally shows a very high level of inspiration and musical craftsmanship and it is clear, from the constant revisions he made to successive editions of his works that appeared during his lifetime and from some of his comments in prefaces to his works, that he adopted a highly critical attitude to what he wrote. In the dedication to Pope Gregory XIII of his 1581 volume of Hymni totius anni, he speaks of music being an art to which he was instinctively drawn, and to the perfection of which he had devoted long years of study, with the help and encouragement of others of critical judgment: ‘ad quae naturali quodam feror instinctu, multos iam annos, et quidem, ut ex aliorum iudicio mihi videor intelligere, non infeliciter, versor, et elaboraro’.

Victoria’s style shows the influence of earlier masters in the Spanish school and also that of his long stay in Rome, where it is likely that he had considerable contact with Palestrina. From 1566 to 1571, during the period when Victoria was studying at the Collegium Germanicum, Palestrina’s sons, Angelo and Rudolfo, were students at the neighbouring Roman Seminary. Casimiri has suggested that this may have resulted in Victoria having direct contacts with the older Roman master, at that time acting as maestro di cappella of the Roman Seminary, even before Victoria took over that post from him in 1571. Be that as it may, Victoria certainly shares with Palestrina a liking for smooth conjoint melodic lines and carefully worked double counterpoint, but his music contains (even after making allowances for changing conventions about the use of musica ficta) more accidentals and a subtle use of harmonic coloration which sets it apart from that of any of his near contemporaries and gives it that quality of passionate intensity for which it is so justly renowned.

The motet Trahe me post te comes from a collection of motets, mostly by Victoria, published in Rome in 1585 by Alessandro Gardane. The text of the motet is taken from the first chapter of the Song of Songs and appears, in a slightly amended form, as the fifth antiphon at second vespers in the Feast of the Immaculate Conception of the Blessed Virgin Mary, kept on 8 December. The motet, reflecting its opening words ‘Draw me after you’, is based on a double canon at unison in which the second tenor imitates the first tenor at a distance of three bars and the first alto starts a similar canon half a bar after the first tenor, but with a different theme, this being answered, again at three bars distance, by the second alto. Despite this apparently rigid technical ground-plan, the general effect of the music is one of gracious and flowing, but not cloying, sweetness.

The Missa Trahe me post te, which was published in Rome by Ascanio Donangeli in 1592, is a parody Mass freely based on this motet. Until the last movement the Mass uses only five voices (SAATB) and it is not until the Agnus Dei that the music utilizes the full six-part texture and canonic procedures of its model. In the Agnus Dei there is a double canon at unison between respectively the first and second alto and the first and second tenor, both canons starting at the same time. This movement is based very closely on the music of the last two-thirds of the motet. Because of the consummate skill with which these complicated technical devices are used, the Mass, like the motet, sounds spacious and melodious.

Alma redemptoris mater is an antiphon of the Blessed Virgin Mary which is sung during Advent and until the Feast of the Purification. Victoria composed two settings of it, one for five voices first published in 1572, and another for eight voices dated 1581. This setting for two equal mixed-voice choirs makes clear reference to the antiphon plainsong in a striking beginning in which the three upper voices of the first choir fan out from the same note in successive entries, with the top part outlining the first phrase of the plainsong. The words ‘redemptoris mater’ are then set to a homophonic passage of wonderful sonority, which is succeeded by more contrapuntally conceived passages for ‘quae pervia caeli’ and ‘et stella maris’ with some reduction in the number of voices. The first part of the antiphon ends with a rich and rhythmically vigorous section for both choirs at the words ‘succurre cadenti surgere qui curat populo’. The Secunda Pars opens with a passage of extremely effective slow antiphonal declamation of the words ‘Tu quae genuisti’ followed by running quaver scales to express ‘natura mirante’. Soon after this Victoria uses to great effect one of his most telling harmonic devices, the introduction of a pair of chords not previously or subsequently employed in the piece, in this case a G minor and a C minor chord used at the words ‘virgo prius’ to underline the sanctity of the virginity of the Mother of God. The antiphon ends with a sustained passage of full double-choir writing of enormous richness and sonority.

The Ave regina caelorum was originally used in the liturgy to precede and follow the chanting of a Psalm. It is now sung at the end of compline from the Feast of the Purification of the Blessed Virgin Mary until the Wednesday in Holy Week. Victoria’s five-part setting of this antiphon was also first published in 1572 in Venice and republished in 1576 by Angelo Gardane, brother of Alessandro. Again much of the musical material is derived from the compline plainsong, some of it loosely paraphrased. The opening point in all parts comes from the first phrase of the plainsong and this is used again by the soprano and bass for ‘Ave domina’. The Secunda Pars begins in a lively manner with the upper three parts using a lightly ornamented version of the plainsong ‘Gaude’ melody over a bass pedal. The last section begins with close imitation in all parts drawn from the plainsong melody for ‘et pro nobis’ and the motet ends with a brilliant and joyful cascade of interlocking cambiata figures rounded off with one of Victoria’s most characteristic endings, a peaceful, short coda in the subdominant.

The text of the Regina caeli laetare first appears in a manuscript of around 1200 and was used as the Magnificat antiphon for the Octave of Easter. It is now sung at the end of compline from Easter Sunday to the Friday after Pentecost. Victoria’s five-part setting of the antiphon was first published in 1572 in Venice. It was subsequently included in the 1576 Gardane edition of Masses, Magnificats and motets. As in the two previous Marian antiphons much of the musical material here is derived from the compline plainsong. The soprano part, imitated by the first alto, enunciates the first phrase of the plainsong in long notes while the second alto simultaneously uses it in shorter notes, followed by the tenor. After a lively set of Alleluias the tenor initiates the second section of the first half of the motet with a direct quotation of the plainsong melody for ‘Quia quem meruisti’ immediately imitated by the bass. At the beginning of the second part of the motet all voices join in a close imitation based on the plainsong melody for ‘Resurrexit’ and, after another Alleluia section, in further close imitation based on a slightly ornamented version of the plainsong for ‘Ora pro nobis Deum’. Flowing and melodious, this antiphon also achieves a sonority which is unusual in a five-part piece.

The Salve regina is the antiphon to the Blessed Virgin Mary which is sung from first vespers on Trinity Sunday to the Saturday before the first Sunday in Advent. Of the four settings of it which Victoria wrote, the most impressive and extended is the double-choir setting first published in the Gardane edition of 1576 and later reissued in 1600 in Madrid. The work is divided into seven separate sections and makes full use of contrasts between a choir of high voices and one of lower voices, and between reduced-voice fugal sections of great intensity and passages of staggering grandeur when the full resources of both choirs are used to create imposing sonorities and a sense of sublime serenity. This work must surely be accounted one of the greatest achievements of any composer in the era of polyphonic music.

Victoria wrote eighteen Magnificats of which sixteen were for four voices and set either the odd or the even verses of the canticle, the intervening verses being sung to plainsong. The remaining two Magnificats are both polychoral; one is for twelve voices and the other for eight voices, and both set all the verses of the canticle after an opening plainsong intonation. The eight-part Magnificat primi toni is written on the first tone for a high choir and a low choir. From the beginning of the fifteenth century onwards Magnificats were regularly composed on the basis of eight different plainsong settings (or tones) of the words (and often composed in sets of eight). The title ‘primi toni’ means that the Magnificat is based on the first tone and uses the plainsong of the tone in the ‘alternatim’ sections (many Magnificats, like the four-part Victoria settings, were composed with alternate verses set to plainsong and polyphony) and/or makes use of its melodic figures in the polyphonic sections. Like the double-choir Salve regina, this Magnificat alternates between fugal sections for one choir and passages of great sonority for both choirs. In the fugal sections of verses 1, 4 and 5 it draws on material from a pair of four-voice first tone Magnificats from the Gardane 1576 publication. As in the Salve regina, the contrasts are most effective, being between the more linear style of writing in the fugal sections and the more homophonic and antiphonal style of the full sections, in which variety is obtained not only by the rapid exchanges of material between the two choirs but also by the judicious use of triple time.