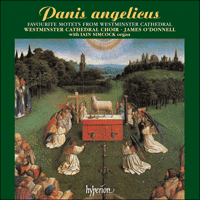 ‘A beautiful disc of sacred motets from one of this country’s finest choirs’ (Classic FM Magazine)
‘What can one say? A feast beyond all dreams. Guaranteed to please’ (Organists' Review)

Felix Mendelssohn-Bartholdy was born in Hamburg, the son of a Jewish banker and the grandson of Moses Mendelssohn, the philosopher. Like his father he was a convert to Christianity. By the time he was seventeen he had written twelve youthful symphonies for strings and firmly established himself with his string Octet and Midsummer Night’s Dream overture. Although he was a product of the Romantic age, his mode of expression was poetic rather than ostentatious. He leaned heavily towards the Classical tradition and was well attuned to the conservatism expected in religious music in his day. The Ave Maria is the second of Three Sacred Pieces, Op 23, for tenor voice, chorus and organ, written in 1830. With its alternations of soloist and choir and its interplay of block harmony and lively counterpoint, it makes a profound impact.

The sacred cantatas of Johann Sebastian Bach were intended for inclusion in the services of the Lutheran church and were intimately associated with the liturgy. Often they were written for a specific season or event in the church’s year and based on a relevant chorale and texts from the Epistle or Gospel for the day. A choir would be needed, with one or more solo singers and an orchestra including a keyboard continuo, and there might be recitatives, arias, possibly a duet, choruses and settings of the chosen chorale, both simple and more elaborate. Church Cantata No 147 (‘Herz und Mund und Tat und Leben’ – ‘Heart and mouth and deed and life’) was sung in July 1723 at the Thomaskirche, Leipzig, where Bach had just been appointed Cantor. The chorale Jesu, joy of man’s desiring, with its oboe obbligato here recreated on the organ, is the cantata’s final movement.

It was in 1872 that César Franck wrote his Panis angelicus for tenor voice, organ, harp, cello and double bass, and it was published in that form the same year. Later he felt moved to incorporate it into his 1860 Messe à 3 voix which, without it, had been first sung in the Church of Sainte-Clotilde, Paris, where he was organist and choirmaster, in April 1861. The song itself is well enough known to need no introduction. The present arrangement by Andrew Gant begins with a straightforward delivery of the melody by unison trebles and proceeds to a full-choir verse making effective use of Franck’s canon.

Colin Mawby is a former Master of Music at Westminster Cathedral. Over the years he has composed a large number of short motets including this Ave verum corpus for mixed choir (dividing at times into as many as eight parts) with organ accompaniment. His is an unusually dramatic setting, depicting, at different dynamic levels, Christ’s agony on the Cross and the awed recognition by Christians of His sacrifice for mankind.

The name of Gioacchino Rossini is indissolubly linked with opera, his lighthearted sallies in this field, like The Italian Girl in Algiers and The Barber of Seville, revealing a more assured sense of theatre and making more of an impact than the tragic Tancredi or William Tell. But he also composed sacred music, including the Stabat mater and the Petite messe solennelle. As he wrote in a letter to the critic Filippo Filippi, ‘all genres are good except the boring one’. O salutaris hostia is a moving, homophonic motet for unaccompanied four-part choir, published in Paris in 1857.

Sir William Harris trained at the Royal College of Music where he studied the organ with Sir Walter Parratt and composition with Charles Wood and Walford Davies. After a period as assistant organist at Lichfield Cathedral he settled in Oxford where he became organist first of New College and later of Christ Church. From 1923 he was a professor at the RCM, and he conducted the Oxford Bach Choir for some years before embarking on almost three decades as Organist and Master of the Choristers of St George’s Chapel, Windsor. His compositions include a major choral work, The Hound of Heaven, for baritone solo, chorus and orchestra, but he is remembered chiefly for his church and organ music of which the anthem Faire is the heaven, a setting for double choir of a poem by Edmund Spenser, is an outstanding example.

Gustav Holst was twenty-six when he wrote his Ave Maria for unaccompanied eight-part female chorus (sung here by boys). His student days at the Royal College of Music where, like many another, he had studied composition with Stanford, had been unremarkable, but it was there that he met a fellow student, Ralph Vaughan Williams, who was to become a valued friend and musical touchstone. Holst left the RCM in 1898 and made his way for a time as a trombonist with the Carl Rosa Opera Company and the Scottish Orchestra. The Ave Maria is prophetic of the later Holst, breaking away from the heady chromaticism of Wagner and the stolidness of Victorian church music and finding a greater freedom in the use of dissonance within diatonic harmony.

Charles Gounod is now remembered mainly for the opera Faust and perhaps, on a more modest level, for the Funeral March of a Marionette. Born in Paris, he studied at the Conservatoire under Halévy and Le Sueur, winning the coveted Prix de Rome in 1839 with an early cantata called Fernand. In the Italian capital he made a study of sixteenth-century church music, especially the masses and motets of Palestrina, and was introduced to the works of J S Bach. Some would regard his tampering with the C major Prelude at the start of Bach’s ‘48’ as undiscerning – if not comparable to drawing a moustache on the Mona Lisa, at least equivalent to thickening her eyebrows. But this rather saccharine Ave Maria, with its sentimentalized melody superimposed on Bach’s broken chords, was popular in its day. Composed in 1859 and described by Gounod as a ‘mélodie religieuse adaptée au 1er prélude de J S Bach’, it has attracted many arrangers. Colin Mawby’s version, with its largely wordless background, creates an atmosphere markedly different from Gounod’s original.

It took some time for the music of Gabriel Fauré to achieve recognition outside his native France, even the now-familiar Requiem making no real headway abroad until well into the 1940s. Born at Pamiers, in the département of Ariège, he trained at the École Niedermeyer in Paris where he attended the piano classes of Saint-Saëns and studied modal harmony and plainsong. In time he was destined to become director of the Paris Conservatoire, but his interest in church music waned and he eventually gave up his choir training and organ playing. Faure’s Op 47 consists of an O salutaris for solo voice and the present Maria, mater gratiae for two voices. Both works are provided with an organ accompaniment. The latter was completed in March 1888, shortly after the first version of the Requiem had its premiere at the Church of the Madeleine, and was scored for tenor and baritone voices. An arrangement for soprano and mezzo followed later in the year.

Sir Edward Elgar had little formal training in music. Yet by the time he was thirty he had succeeded his father as organist of St George’s Roman Catholic Church in Worcester, served as an orchestral violinist in a number of Three Choirs Festivals (including one conducted by Dvorák) and had his orchestral Sevillana performed under the baton of August Manns (no less) in London’s Crystal Palace. He was, of course, destined for greatness. His Op 2 comprises three short motets – Ave Maria, Ave maris stella, and the present Ave verum corpus, which is first in the set. Steeped in the Romantic tradition of Mendelssohn and Gounod and requiring a four-part mixed choir and organ, it was originally set to the words of the Pie Jesu. It was completed in 1887 and revised five years later.