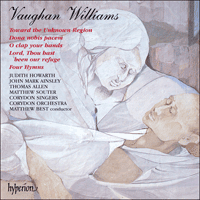 ‘An enticing VW collection whose attractions are enhanced by Christopher Palmer's typically illuminating booklet notes’ (Gramophone)
‘Sit back and enjoy this VW concert of uncommon power and beauty … another luscious plum in the Hyperion catalogue’ (Soundscapes, Australia)

Dona nobis pacem fills a much larger canvas than anything else in this collection. It has every right to do so, for its theme is anguished and impassioned on a cosmic scale. It is, if you like, ‘propaganda’, an ‘occasional’ piece—if pleas for peace and tolerance and understanding can ever suitably be described as ‘occasional’. No question here but that the motivation was war, or the deepening sense of trouble which by the mid-1930s seemed set to explode into war. Vaughan Williams compiled a text chiefly from the Bible and Whitman (though the work’s motto, and the words of its first movement, belong to the Mass) and Dona nobis pacem was first performed in Huddersfield in October 1936, with the Huddersfield Choral Society and the Hallé Orchestra conducted by Albert Coates.

In the event, Vaughan Williams’s warnings and entreaties went unheeded. But the humanitarian warmth and splendour of his vision remains; and, after all, if the day ever dawns when composers fail to speak out through the medium of their art against mankind’s seemingly illimitable folly and wickedness, we shall be in a poor way, to put it mildly.

(i) The soprano solo leads the forces of apprehensive humanity (the chorus) in their quest for peace. At the end the drums of war are heard in the far distance.

(ii) War erupts: nothing and nobody is inviolate. The Whitman setting is dominated by beating drums and blowing bugles, inbuilt in the music even when the text isn’t directly referring to them. In an inspired transition (Vaughan Williams no less than Britten was a master of the seamless scene-change) the drums of war turn into the lapping, laving rhythms of …

(iii) Reconciliation. The ‘enemy’ is dead—‘a man as divine as myself’, as in Wilfred Owen’s ‘Strange Meeting’—and music of transcendent beauty and simplicity warms and cleanses the world.

(iv) Dirge for Two Veterans. A second drum-study. This time the drums are not of war but of its aftermath—death, and burial. Vaughan Williams based this movement on an earlier setting of the same words made before his mature style had crystallized. This works to his advantage since the music has a kind of rude solidity and strength which a more sophisticated musical language might have mellowed. It would be easy to sentimentalize Whitman here, and this Vaughan Williams resolutely avoids.

(v) The ostinato bass which plays out the ‘veterans’ now plays in the Angel of Death. The snorting of Dan’s horses momentarily recalls the apocalyptic equine visions of Sancta Civitas, but these are soon dispelled by one of the work’s most magical moments, the solo baritone’s reassuring ‘O man, greatly beloved, fear not, peace be unto thee’. Chorus basses intone the great text from Micah, almost every word a poem: ‘Nation shall not lift up a sword against nation, neither shall they learn war any more.’ The word spreads among all instruments and tongues in prospect of a New Jerusalem: bells ring out in a riotous succession of keys and peals, and what better than C major for the Christmas climax: ‘On earth peace, goodwill toward men’? As the sounds of the heavenly host move out of earshot the soprano solo rises from them with a final reiteration of her entreaty: hers alone is the voice that lingers at the end like a solitary ray of hope, a light in the night.

The Five Mystical Songs for baritone and orchestra were written in 1911. The following year Vaughan Williams began what sounds like a smaller-scale companion piece, the Four Hymns for solo tenor, solo viola and strings. Though completed in 1914, the war delayed performance until 1920. It is a beautiful work with several interesting features. Is VW really given enough credit as the first English composer to set consistently only the finest literature to music? Do we place him as prominently as he deserves in the vanguard of the Purcell revival? The first hymn, ‘Lord! Come away!’ testifies eloquently to the composer’s love of Purcellian declamation. The text by Jeremy Taylor (1613–1667), Bishop of Down and Connor, is variously subtitled ‘The Second Hymn for Advent’ and ‘Christ’s coming to Jerusalem in triumph’; hence the processional character of the second part. ‘Who is this fair one’ is a dialogue for two voices—the solo tenor and the solo viola with its intimate, communing character (it was always on of VW’s favourite sonorities). As for Isaac Watts (1674–1748), one of whose hymns this is, A E Housman, reading Dr Johnson’s rhetorical question ‘If true poetry is not to be found in Pope, where is it to be found?’ replied ‘It is to be found, Dr Johnson, in Dr Watts’. We all know Watts as the author of When I survey the wondrous Cross and O God, our help in ages past.

The setting of Richard Crashaw’s ‘Come Love, come Lord’ breathes that spirit of mystical remoteness later to inform (on a wider canvas) A Pastoral Symphony—a perception of

The silence that is in the starry sky,
The sleep that is among the lonely hills.

The finale, ‘Evening Hymn’ (a translation from the Greek by the then Poet Laureate, Robert Bridges), is a brilliant contrapuntal tour de force whose not least remarkable feature is its pre-echoes (in its seven-note bell-like basso ostinato) of Holst’s Hymn of Jesus, composed in 1917. There are two themes—the ‘bells’ and a viola tune, soon taken up by the tenor—but the distinctions between them quickly become blurred as the hymn gains in warmth, intensity and complexity. In a long-drawn fade-out it is the bells that have the last word.

A hundred years on, now that Whitman’s ideals of democracy and individualism have become so integral a part of modern thought, it is hard for us to appreciate how enormously liberating was the impact of Leaves of Grass on the free-thinking young of the late Victorian generation—notably Delius, Holst and of course Vaughan Williams. Shortly before he died VW told Michael Kennedy, ‘I’ve never got over [Whitman], I’m glad to say …’, and he had good reason not to have, since two of the most outstanding successes of his early career as a composer were Whitman settings—Toward the Unknown Region (probably completed in 1906, first performed at the Leeds Festival of 1907, the composer conducting) and the mighty Sea Symphony of 1909.

Toward the Unknown Region was VW’s first major choral piece (he calls it a ‘Song’ for chorus and orchestra) and despite its intermittent Wagnerian echoes (Wagner was an influence that he did want to get over, and it took him quite a time to do so) its obvious inspirational qualities—not to mention its technical savoir faire in terms of the handling of massed voices—made it a success from the first. Stanford (who conducted the first London performance in 1907) and Elgar are important models, but most of all the Parry of Blest Pair of Sirens—Parry who urged VW to write choral music ‘as befits an Englishman and democrat’. The spirit of adventure is always keen in Vaughan Williams; but after the great outburst at ‘Nor any bounds bounding us’ the words seem buoyed up on, bowled on by, wave after wave of musical excitement and elation. The great choreographer Agnes de Mille, describing an altogether different medium, nonetheless invoked an emotion which distils the spirit of Toward the Unknown Region to perfection: ‘To take the air. To challenge space. To move into space with patterns of shining splendour. To be at once stronger and freer than at any other time in life. To lift up the heart …’

Toward the Unknown Region was the work of a comparatively young man. But the music, no less than the text, has a transcendent timelessness that relates to any, and every, period in life.

Of the broad straightforward choral style of O clap your hands (1920) Michael Kennedy remarks how apt it is to its purpose of ‘filling a great cathedral with joyous sounds’. It is however not quite as straightforward as all that in every respect: there are moments when choir and orchestra seem to be in untypical harmonic conflict (eg ‘Sing praises unto our King’). Mistake? No, VW evidently meant these clashes; and once we accept that they are meant, we can relish them the more keenly for their unexpectedness.

Composed in 1921, Lord, Thou hast been our refuge combines a setting of Psalm 90 with Issac Watts’s metrical version of the same Psalm—O God, our help in ages past—and the fine tune ‘St Anne’, to which the latter is commonly sung. VW carries out this feat with typically unostentatious skill. The baritone soloist (sometimes a semi-chorus) starts the Psalm, chant-like; the full chorus enters with the hymn, pianissimo, as if in the distance, and the two proceed in tandem—always piano—until the first verse of the Hymn is finished. The full chorus then continues with the Psalm over a broad spectrum of homophonic texture. An instrumental transition, fugally based on ‘St Anne’, leads to a combined recapitulation / apotheosis—forte now—in which fugal derivations from ‘St Anne’ assume ever greater importance (‘And the glorious majesty of our Lord be upon us’). Vaughan Williams would certainly have been aware, in this context, of Bach’s so-called ‘St Anne’ Fugue, the first phrase of whose subject is identical with the first phrase of the ‘St Anne’ tune.