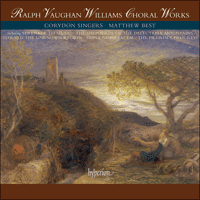 Issued to mark the fiftieth anniversary of Vaughan Williams’s death, this collection is tantalizing: it starts with one of the best-selling discs in the the catalogue, the Serenade to Music, and includes such favourites as the Five Mystical Songs and The Hundreth Psalm. There are also two intriguing pairings: in Dona nobis pacem, RVW warns of the impending doom of WWII, in A song of thanksgiving we hear his moving response to its successful conclusion; in The shepherds of the delectable mountains we hear an early working of Bunyan’s literary masterpiece, later extensively reworked in the landmark 1942 BBC radio production of The Pilgrim’s Progress featuring Sir John Gielgud and reprised here, this time in condensed form. Throughout the collection, RVW’s mastery in setting great texts to music is evident, and has prompted the sort of glowing reviews that make this box-set a must have.

‘This present collection brings together critical elements of Vaughan Williams’s style in excellent interpretations and recordings with a comprehensive set of notes, texts and photographs. In this 50th-anniversary year, it becomes an affectionate document—and proof of the composer’s mastery of choral writing’ (Choir & Organ)
‘The performances are splendid, graced by such soloists as Thomas Allen and Bryn Terfel … the rapturous Serenade to Music has a cast of 16 singers fit to rival those of the original recording’ (The Sunday Times)
‘The quality of Best's choristers and his insistence on the highest standards hallmark the Corydon Singers' catalogue of Hyperion recordings, especially so in their Vaughan Williams output released here on four CDs … Best's sense of pacing, feeling for word-painting and singer's instinct for phrasing never fail’ (Classic FM Magazine)
‘This is as impressive and noteworthy a set as one could ask. It cuts a juicy swathe through the RVW catalogue of vocal works. In doing so it mixes the great with enjoyable ephemera and the Bunyan-centred with the godly and grand … Hyperion's laurels of the nineties granted freshly irresistible life in the now not so new millennium’ (MusicWeb International)