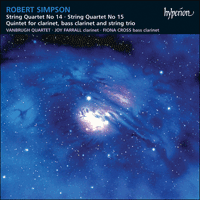 The Vanbrugh Quartet gave the first performance of Simpson’s String Quartet No 14 in 1991. This is the first of Robert Simpson’s quartets since No 6 (1975) to adopt a classical four-movement design, and perhaps provides an ideal introduction for those still unfamiliar with his music. The opening Allegro is fluid, highly active and predominantly contrapuntal in texture. Though the movement avoids strict sonata form, a clear second subject appears: a nervous, double-dotted figure which generates further contrapuntal entries and immense rhythmic energy at a later stage. The ending dies away quietly in a mood of temporary stillness.

Simpson has mastered the art of writing true Beethovenian, one-in-a-bar scherzi. The second movement of this quartet is such an example: lithe, energetic and vital with plenty of dynamism packed into a mere four minutes. Much relaxation is provided by the next movement, a noble, eloquent Andante which grows steadily from the cello’s opening phrase. In much of Simpson’s later slow movements a Bach-like serenity and deep contemplation can be sensed. Here is a fine example of such, as well as being one of the most beautifully transparent quartet slow movements this century.

Rough humour dominates the Allegro finale, a piece of great force, deliberation and physical strength. Much of the movement is subdued, however, and there is a long stretch in the middle that is mainly pianissimo, carried along by a gentle momentum. The final bars generate massive excitement as the music gathers steam, and explosive triplets are scattered amongst all four instruments.

There are few string quartets since Beethoven that achieve a perfect balance, both structurally and emotionally, whilst also displaying the composer’s imagination at its finest. The Quartet No 14 of Robert Simpson is such an example. It is dedicated to John Young.

The Quintet for clarinet, bass clarinet and string trio was originally written in 1981 at the request of the double bass player Gerald Drucker, who asked for a piece for his ensemble. Robert Simpson was attracted to the idea of a quintet for the somewhat bizarre combination of three double basses, clarinet and bass clarinet, beginning with a passage where the bass trio is actually introduced in harmonics, so that the two clarinets enter below! The composer later decided to rescore the quintet for more secure forces—string trio, clarinet and bass clarinet—and it is this version that appears on the present recording. The overall structure resembles Simpson’s String Quartet No 7 of 1977, a work in one continuous movement where two slow, contrapuntal outer sections frame an extended, vigorous Allegro.

The opening Adagio is fugal. A calm, floating movement unfolds, introducing each of the instruments in turn. Two salient intervals are presented in this opening statement: a repeated, rocking minor-third figure and a descending perfect fourth. The Allegro begins mysteriously. The tempo is altered from a slow triple metre to an alla breve, and the music is pervaded by a softly insistent repeated-note pattern. Two crescendos are built, after which the music bursts forth into a massive, striding one-in-a-bar, forming the central part. After a passage of maximum intensity the Adagio returns in shortened form to act as a coda. The two original intervals (minor third and perfect fourth) are still clearly evident, though they now create different shapes as the piece drifts away to a peaceful conclusion.

String Quartet No 15 was written quickly during the summer of 1991. It is dedicated to the Vanbrugh Quartet who have developed a growing association with Simpson’s later chamber music. Like the thirteenth quartet (1989), the present work is cast in one continuous movement and is relatively short. The overall mood is tough and turbulent, perhaps suggesting an affinity with the language of Quartet No 11 (1984). As with much of Simpson’s more recent work, the chief roots are a collection of intervals—here a minor seventh (both ascending and descending) and a sequence of falling minor seconds, but as Robert Simpson once stated, ‘the listener can safely forget about trying to identify them consciously; in any case, no amount of textual ingenuity can give music a flow it does not naturally possess’.

The opening Adagio assumes the character of a brief but stern introduction, contrasting moments of extreme nervous tension with more gently flowing counterpoint. Major sevenths are particularly prominent here. The most extended part of the work is the second section, Severo, a large paragraph in a broadly flowing triple time based on a variant of the quartet’s opening theme. The severity and intensity are maintained for a considerable period without relaxation, until eventually a new section emerges alternating hushed, ghostly, repeated-note figurations for all four players with softly sustained writing. Tension rises again, at first culminating in a harsh chordal passage made up of sevenths piled on top of one another, finally reaching the climax of the quartet which fades away leaving a high C suspended on the first violin.

The concluding Allegretto is in the nature of a calm epilogue, as tenderness and delicacy pervade the work for the first time. The plaintive violin melody which begins this section is in fact yet another use of the work’s original intervals. Even here there is a brief moment of intensity, perhaps reminding the listener of the Severo for the last time before the work floats away into silence.