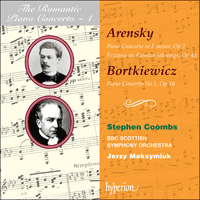 ‘A model issue from a source which has become a byword for the best in enterprise’ (Gramophone)
‘Coombs is an artist of great sensitivity and effortless virtuosity, and he makes the best possible case for both’ (The Penguin Guide to Compact Discs)
‘A couple of piano concertos that have been waiting in the wings for the committed advocacy they deserve and have finally received’ (Fanfare, USA)
„Coombs's unimpeachable musicianship and authority carry all before it“ (Piano, Germany)

Anton Stepanovich Arensky and Sergei Eduardovich Bortkiewicz are hardly household names. Arensky’s delicious Piano Trio in D minor continues to keep its place on the fringes of the chamber repertoire, and the Waltz movement from his Suite for two pianos receives an occasional outing; otherwise nothing. Who has even heard of Bortkiewicz other than aficionados of the piano’s dustier repertoire?

Arensky was born in 1861 in Novgorod, a birthplace shared with Balakirev whose influence on the course of his country’s music during the second part of the nineteenth century was more profound than any other. Arensky, born a generation later and without the same musical genius and aggressive nationalism, fell under the spell of the post-Chopin/Liszt school (both composers revered by Balakirev and his nationalist ‘Free School’ of music). He was not going to extend the piano’s expressive potential as the mightier talents of Scriabin, Medtner and Rachmaninov were later to do.

Arensky’s gifts were, nevertheless, precocious. By the age of nine he had already composed some songs and piano pieces. His father (a doctor and accomplished amateur cellist) and mother (her son’s first teacher and an excellent pianist herself) moved to St Petersburg and the boy entered the Conservatory there in 1879, graduating in 1882, a year after writing the present Piano Concerto.

Arensky’s Opus 2 is unmistakably indebted to Chopin and Tchaikovsky, with the melodic grace of Mendelssohn and some of the more virtuosic passages of Liszt thrown in for good measure. (The last movement threatens to break into the opening of Grieg’s Piano Concerto!) Indeed, after hearing the work for the very first time, the listener somehow feels that he knows it intimately, like an old friend … undemanding, and for whom one has to make no special effort.

It’s a cosy piece, full of hummable tunes. As one would expect of a composition pupil of Rimsky-Korsakov, it is expertly crafted and the piano part is distinctive and beautifully laid out. The most daring departure from convention is in the use of a 5/4 time signature in the Finale. It was a quirk of Arensky’s that he enjoyed unusual metres. (Tchaikovsky even reproached him for doing so.)

The Concerto captured the imagination of many pianists of the day—it was a favourite of the youthful Vladimir Horowitz—and it provided an effective and stylish vehicle for many a barn-stormer before its salon prettiness came to be seen as superficial and second-rate. Arensky dedicated the work to the great cellist ‘Herrn Professor Carl Davidoff’ [sic], head of the St Petersburg Conservatory during the time the composer studied there. It was a dedication repeated when he composed his celebrated Trio in Davidov’s memory.

The Concerto was published in 1883 and was an immediate success in both St Petersburg and Moscow. The composer, having won the Gold Medal for composition with his Symphony No 1 in B minor, was appointed Professor of Harmony and Counterpoint at the Moscow Conservatory. A successful if not adventurous career would seem to have been presaged by these youthful triumphs. Not only this, but he was befriended and championed by Tchaikovsky. A product of the Nationalist school of St Petersburg and now a star on the staff of the more international Moscow establishment, Arensky continued to compose prolifically as well as teach (Rachmaninov, Scriabin and Gretchaninov were among his pupils) until 1894. He resigned his post on being offered the directorship of the Imperial Court Chapel in succession to Balakirev himself, no less, who recommended Arensky for the position. This involved a move back to St Petersburg and it is significant that the other composition of Arensky’s presented here dates from 1899 and is, again, a product of his life in the city headquarters of the Russian nationalist school: Russian themes in a cosmopolitan wrapping.

The Fantasy on Russian folksongs, Opus 48, is a brief but attractive rhapsody using two folk tunes collected by the ethno-musicological pioneer Trophim Ryabinin. The first (Andante sostenuto) is in E minor; the second (Allegretto) in D minor. Slight though the piece may be, it makes for a pleasant listen on disc, for in what concert hall does one now hear this kind of piano-and-orchestra lollipop?

The directorship of the Imperial Chapel provided not only a handsome salary but also a lifetime pension of 6,000 roubles a year for Arensky. Underneath this apparently ordinary story of modest acclaim and success, however, there ran a dark and troubled (though typically Russian) streak. Arensky, from very early in his career, was an alcoholic and an inveterate gambler. Moreover, his private life remains a mystery. He never married and elected to receive few visitors—an austere and unexpected contrast to the genial, expressive lyricism of his attractive music. He died of consumption in a sanatorium in Finland in February 1906.

The Bortkiewicz Concerto has been recorded once before, albeit in a heavily cut version. This Hyperion issue is therefore a premiere recording of the complete work. The American pianist Marjorie Mitchell made several out-of-the-way concerto discs with the conductor William Strickland in the late 1950s and early ’60s, those by Carpenter, Field, Delius and Britten among them. Her recording of the Bortkiewicz Concerto was coupled with Busoni’s Indian Fantasy! That Brunswick disc has acquired something of a legendary status among collectors (it is extremely hard to come by) because Bortkiewicz’s Piano Concerto No 1 is one of the great ‘fun’ concertos with its heady bravura writing, lush orchestration, strong, well-wrought and effective material and, in the first movement, one of the most seductive, romantic themes of the whole genre. Hollywood never had it this good—close your eyes and black-and-white films of lost love, heartache and yearning passion are conjured up. If the other two movements are less successful they are only slightly so; the second is a gorgeously tuneful Andante, the Finale a Russian dance. Chronologically, of course, Hollywood has nothing to do with Bortkiewicz and his First Concerto. Dedicated to his wife, the work was premiered in 1912 (and published the following year), after which it was taken up enthusiastically.

Like Arensky, Bortkiewicz was Russian (he was born in Kharkov, 16 February 1877) and studied at the St Petersburg Conservatory—in his spare time at first, for his father insisted that he study law. ‘I inherited my mother’s pleasure in music-making’, he wrote. ‘And what a blessing it was that we made much music when I was young. My mother played the piano very well and I was passionately fond of music.’

Later, from 1900 to 1902, he studied at the Leipzig Conservatory—piano with the former Liszt pupil Alfred Reisenauer (1863–1907), and composition with Salomon Jadassohn (1831–1902), another erstwhile Liszt student and among the most celebrated German pedagogues of the time, famously arch-conservative in his codified views on harmony and counterpoint.

Unlike some of his Russian contemporaries (Rachmaninov, Medtner, Scriabin) Bortkiewicz was not a sufficiently gifted pianist to make a career as a soloist, though after his debut (Munich, 1902) he made several European tours. He made no records or piano rolls and while one critic felt he produced a ‘harsh, jarring sound’ others give the impression of him being only a capable player, at his best in his own works. His strengths, he eventually decided, were teaching and composition. He taught at the Klindworth-Scharwenka Conservatory in Berlin from 1904 until the outbreak of the First World War when he was forced to return to Russia. After the Revolution he left his native land, like so many never to return again, and after a peripatetic existence, including a two-year stay in (then) Constantinople, Bortkiewicz finally settled in Vienna in 1922, dying there in October 1952.

‘I am a Romantic and a melodist’, he wrote in an essay towards the end of his life, ‘and as such and in spite of my distaste for the so-called ‘modern’, atonal and cacophonic music, I do hope that I composed some noteworthy works without getting the reputation of being an epigone or imitator of composers who lived before me.’ Bortkiewicz’s compositions are dominated by those for his instrument and many are well worth investigating (Lamentations and Consolations, Op 17, for example, and some of the Preludes from Opp 13, 15, 33 and 40, Lyrica Nova Op 59 from 1940, and the 1907 Piano Sonata No 1 in B major, Op 9). Perhaps, like the present Concerto (he wrote two others), they lack profundity and originality in the widest sense. But does the only music we appreciate have to be by the great composers who overturned systems, struck out for the unknown, and challenged their muse? One hopes not. There must always be a place for those like Arensky and Bortkiewicz who reflect so elegantly and expertly on what has gone before, rather than shake us by the ears and grab us (sometimes screaming) into the future.