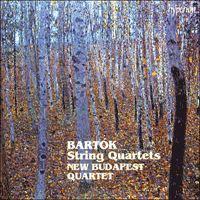 In 1939, at the age of 58, Béla Bartók completed his Sixth String Quartet. It was to be his last. In the summer of 1945 he sketched a few ideas for a Seventh, but his failing health prevented further work on the composition. He died in September in New York. Over half a century has therefore elapsed since Bartók brought to an end his series of string quartets, a body of music which has influenced, to an almost unprecedented degree and in many different ways, the composition of many subsequent works in the genre, there being few succeeding composers who have not been stimulated at some time by his important contribution to quartet writing.

Bartók listed his String Quartet No 1 in 1909 as Opus 7, but in András Szöllösy’s catalogue it is Bartók’s fortieth work, his third or fourth essay in the medium, the student quartets from the 1890s not having survived. Bartók was therefore no newcomer when he wrote this First Quartet, an indication of his confidence being that he took no model for it – his First Quartet is original both in thought and structure, the latter arising from the former. One can find an equivalent slow contrapuntal opening in late Beethoven Quartets or thematic chromaticism in Richard Strauss and (less so) Max Reger (all twelve tones are heard in the exposition); textual or thematic aspects also echo Debussy, but no more than one can find examples of influences from Haydn, Mozart and Clementi in Beethoven’s Opus 18.

The Quartet No 1 is a journey from darkness to light – it begins, as Bartók said, as a chromatic ‘funeral dirge’. The opening transforms an idea which portrays Stefi Geyer, a young violinist to whom he had become attached. By the time of the Quartet their relationship was over, having ended with discussions of death and suicide. The Quartet begins in this depressed emotional state but the first movement does not wallow in Romantic self-pity. It is also effectively a prelude to the Allegretto, which notably uses a whole-tone scale. Nor is this an unabsorbed Debussy influence: the use of all twelve tones in the first movement’s exordium demands the refining process of the concentrated whole-tone scale which in the more overtly folk-based thematicism of the finale is reborn into a new and vibrant language – the rebirth being irrevocably organic, inherent in the nature of the instruments’ tuning in rising fifths. Thus the thrilling ending of the work with fifths resounding as powerful supertonics, embraces major and minor modes, the whole-tone scale and, significantly in view of the provenance of Bartók’s evolved musical language, the pentatonic scale. In this work the mature Bartók had arrived.

The Second String Quartet, Opus 17, appeared almost ten years later, a long period in the life of a young composer. Much had happened musically to him during this time. His interest in folk music and concurrent preoccupation with theatre music in the opera Duke Bluebeard’s Castle and the ballet The Wooden Prince sought expression in a different medium. It was apposite for him to compose a second Quartet in the years 1915-17 owing to the growing flexibility of his technique. The dance style of ballet, his multi-rhythms, a greater concentration upon thematic cellular organisms, and the supra-musical drama of what ‘happens’ in an abstract work, to say nothing of the refreshing change of medium for the artist – these factors led to the Second Quartet, which is as original a composition as the First.

The movements are very different in character, as genre pieces (or, as in early quartets, a partita) in structure, yet the first movement’s urgency, the demanding rhythmic complexity of the Scherzo and the easing of tension in the long, slow finale, combine to make a work from which one cannot take any one movement or conceive any alternative conclusion. Nor is the ending a ‘lament’ such as we might find in a work by one whose country was then a major combatant in a great war. Bartók’s Second Quartet is solely about music. His outrage at the war can be found in The Wooden Prince.

Ten more years separated the Second Quartet from the Third (1927). The war had changed Europe for ever. The United States was now a world power, its riches creating conditions in which all arts could flourish. Some changes were almost alarmingly sudden. Radio, the cinema, gramophone records, the rise of Communism – the world shrank as Europe’s centuries-old institutions crumbled and altered. Few could have remained aloof from these events, but Bartók was not an artistic ‘reporter’, a social-realist, ‘reflecting’ life. He knew there is no life in a mirror. The ‘changes’ apparent in his Third Quartet are purely artistic ones, yet they are those of a living organism – his life’s work. In Bartók’s Third we find the widest range of effects in string writing used in any quartet up to that time. It is the shortest of his six Quartets, yet as a single movement it is his largest instrumental structure whose concentration upon motivic cells virtually removes thematic and tonal factors. It returns to basics, but is far from primitive: it is a natural, passionate life force, curbed and directed by a great artist’s creative intelligence. The ‘new order’ of Bartók’s Third Quartet is not a social one for public display: it is a summation and refinement of his recently-evolved musical directions, standing as a unique work of art which anticipates aspects of his final masterpieces.

The concentration in the Third Quartet perhaps challenged Bartók to flex his new-found powers differently, but not so differently as to abandon the fruits of the Third, which was completed in September 1927. Three months later Bartók was in the USA and entered the work for a competition by the Music Fund Society of Philadelphia. In October 1928 he learned that he had won joint first prize with Alfredo Casella. By this time he had already composed his Fourth Quartet in which intervallic germinal material flowers more fully, the rhythmic structure being more fluid but no less percussive and each instrument more interdependent. This germinal ‘flowering’ produces more recognizable ‘themes’, and with them a greater tonal feeling. The frequent use of double- and triple-stopping produces a noticeably fuller texture, certainly in the first movement, which appears to begin the work where the Third Quartet ended. Bartók’s use of the structural functions of texture (a feature of late Debussy) is most apparent in the Fourth Quartet, but this is not a colouristic device – it comes from the music itself.

On publication in 1929 the score carried an analysis by Bartók which emphasized the work’s traditional elements at the expense of its originality, and claimed the nucleus to be the slow movement (which the Third Quartet, for all its slow-fast-slow-fast form, lacked): ‘the other movements, as it were, bedded around it’. Structurally, the Fourth is unlike the Third. It is arch-shaped in five movements, with the fulcrum the slow movement and two Scherzos which address us in non-traditional guise. The outer movements, balanced in time-scale with the finale utilizing material from the opening movement, have widely differing characters.

The Fourth Quartet is another astounding compendium of Bartók’s art. In structure and texture, in its masterly transformation of organic material, and in much else besides, it stands with its three precursors as a work of genius: utterly new and equally different, the composer was nonetheless correct in emphasizing its traditional lines, which in the Third derived from older, primitive, structures.

The Fifth Quartet (1934) came six years later. It was written in a month (6 August – 6 September), and followed the revivifying effect the composition of the 44 Duos for two violins had had upon his art in thematic as opposed to intervallic transformation and – an inherent feature of the quartet as a medium, not often used by Bartók before – the juxtaposition of slow and fast music. While the Fourth Quartet is in an almost hidden C major, the B flat tonality of the Fifth is more apparent. The hectic cross-rhythms which ended No 4 stretched syncopation to the limit but remained throughout in 2/4, yet in the Fifth Quartet’s opening movement the pulse is not fixed – the ‘syncopation’ of the first idea cannot be heard against an underlying pulse, for there is none. When this theme is used as the basis for a fugato in the finale, an example of Bartók’s cross-thematicism, we then experience the syncopation at high speed. Taking external features from No 4, the Fifth Quartet is also in five movements, but the slow movements surround a central, folk-inspired Scherzo. The textural aspects of the slow movements faintly echo the corresponding ones in the Fourth, and are also found in the Trio of the Scherzo.

The Sixth Quartet was written towards the end of 1939 when Bartók, then 57 years old, was in a low emotional state. Although Hungary was not at first directly involved, World War II had broken out during the composition of the work, and his mother was mortally ill (she died a month after the Quartet was finished). Whilst it does not necessarily follow that the emotional tenor of the Sixth Quartet was suggested by these events, it is not hard to envisage Bartók’s concern in much of the work’s tragic nature, yet it also recalls aspects of Contrasts, the Music for strings, percussion and celesta, and the Divertimento. Structurally the Sixth Quartet breaks fresh ground. It is the only one of Bartók’s Quartets ostensibly in four movements, but the first three are prefaced by the same ‘motto’ theme, rather differently treated, which is headed ‘Mesto’ (sad). Therefore we hear not four movements but seven (slow-fast; slow-fast; slow-fast; slow). The middle movements, March and Burletta, echo folk character, as do the Burletta’s quarter-tones. The opening ‘motto’ theme is played at first by the viola, and no matter what happens in the first three movements, its pervasive nature overhangs everything. In the finale it becomes the theme of that movement, a set of variations. Its final appearance (on viola, in the last six bars) is of resigned acceptance, not of hopelessness, for that which is accepted at last is a fact of life, upon which quiet resolve the work ends.