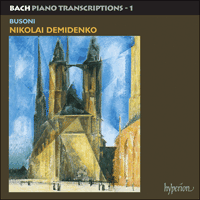 It is only necessary to mention J S Bach in order, with one decisive blow, to raise the rank of transcription to artistic honour in the reader’s [listener’s] estimation … from him I learnt to recognize the truth that Good and Great Universal Music remains the same through whatever medium it is sounded. (Busoni, Berlin November 1910)

Ferruccio Dante Michelangiolo Benvenuto Busoni (1866–1924) was born in Empoli, near Florence. His father was an Italian clarinettist, his mother a pianist of German descent. As a child encouraged by Anton Rubinstein and written about by Hanslick, as an adolescent befriended by Goldmark and Brahms, as a man admired by Sibelius and Reger, and as a teacher revered by students like Agosti and Haskil, Harriet Cohen and Eduard Steuermann, Palmgren and Petri, he stood in his lifetime for the embodiment of the complete musician—an artist deeply rooted in the Teutonic, in Bach and Beethoven, in the wondrous majesty of that god of his farewell Berlin concerts, Mozart. He was a composer of awesome dimension, a classical formalist no less than an innovative discoverer questing after the new, for ever seeking his ‘own individual sound’. And he was a pianist (essentially self-taught, without allegiance to any school or master) concerned with the monumental, the titanic, the spiritually transcendental. A modernist, a stylistic transitionalist, he was a player of powerfully investigative mind, who both shocked and stimulated his contemporaries with the independence of his thought, the ‘extraordinary cold white fire’, the ‘intellectualized and sublimated emotion’ (Sorabji’s words) of his musicality. He liked, as he put it in 1902, to cleanse works of ‘the dust of tradition’: ‘I try to restore them to their youth, to present them as they sounded to people at the moment when they first sprang from the … composer.’

According to his first biographer, Hugo Leichtentritt (1916), ‘Italian by birth and instinct, German by education and choice’, in his own estimation a cosmopolitan, Busoni spent the greater part of his adult life (from 1894) in Berlin—teaching, playing, conducting, writing, editing. ‘In Berlin’, Leichtentritt suggests (in a lecture given at Harvard in 1934/35 and included in his book Music, History, and Ideas, 1938),

Ferruccio Busoni was for twenty years the advocate of all ideas that aimed seriously at creating something vitally new. As an incomparable master of the piano, as a composer, conductor, teacher, essayist, and philosopher of art, Busoni was an outstanding personality of the highest artistic and intellectual type. In Busoni all the various tendencies of the modern movement met: all were familiar to him, and all were searchingly investigated and approved or rejected … almost every night there was a gathering of young artists from many countries at his hospitable residence, Victoria Luise Platz 11 in Berlin. There were heated controversies on the artistic problems of the day in which everyone spoke freely and which were given great distinction by Busoni’s own esprit and wit, superior understanding, mature judgement, and illuminating criticism. It is probable that in our confused, nationalistic, impoverished age such social intercourse no longer exists at all. Indeed, those gatherings were a sort of modern parallel to the Socratic symposiums of which Plato gives us so vivid a picture.

In his autobiography From Piano to Forte (1931), however, his old friend Mark Hambourg (dedicatee of the Second Sonatina, 1912), recollecting the winter of 1903/04, chronicles another lifestyle—lonelier and less gregarious: Busoni, he says, had ‘a passion for beautiful books and modern pictures … he would spend large sums of money on fine editions, though he was not at all well off … he scarcely ever went out except at night, when he would go and sit in a café, or wander the streets like Haroun al Raschid looking for adventure. I believe this habit of going out so late and smoking heavy cigars were the primary causes of his early death.’

Busoni’s pedalling, precisely though not exhaustively marked in his scores, must have been a revelation. In an appendix to Volume I of his performing edition of the ‘48’, ‘On the Transcription of Bach’s Organ Works for Pianoforte’ (New York, January 1894), he was of the opinion that one should ‘not believe in the legendary tradition, that Bach must be played without the pedal. While the pedal is sometimes necessary in Bach’s piano works, it is absolutely essential in [the] transcribed organ pieces … consider, that the mixtures opened with the full organ contain the 5th and 8ve, or even the 3rd and 7th, of every tone struck. An approximate imitation of these tone-blendings (tone-tangles [did Grainger get his idiosyncracy of language from Busoni?]) can be obtained, on the piano, only by using the pedal.’ The una corda, he says, is appropriate for all levels of dynamic up to mezzo forte, not just for softness of sound but for ‘quality of tone’. ‘Real organ-effects’, he is positive, ‘can be obtained only by the combined action of the three pedals.’ (This, of course, is in an ideal world. Just as one sometimes has to create an illusion of what it not registrally available—for instance, the bottom A flat and G octaves on the final page of the early ‘St Anne’ Prelude and Fugue of 1890: not every piano is an extended-compass Bösendorfer Imperial—so occasionally one has no option but to cheat the ear by pedalling in ways other than inferred or prescribed: Busoni himself, after all, played standard double-pedal Bechsteins as often as he did patented triple-pedal Steinways.)

Busoni disliked recording and suffered coping with the limitations of a then primitive technology unable to contain the span of his vision. Even so, the evidence, however sometimes double-edged in usefulness, of his few existing (late) acoustic 78s, recorded in London for Columbia on 27 February 1922, his pre-war Welte piano rolls, and his later ones for Duo Art (including the Bach Chaconne, Liszt’s second Polonaise, and all the Chopin Préludes), suggests a level of intimacy with the piano and a knowledge of its possibilities shared only perhaps with Hofmann and Godowsky. He knew exactly what could and could not be done with it. Necessarily, allowances have to be made. Rolls, for instance, cannot tell us much about the finer gradations of his pedalling (the medium has too many mechanical shortcomings). But they are valuable as a means of measuring large-scale tempo relationships within an on-going totality, and (if well regulated for play-back) they can sometimes allow glimpses of a rubato notably free and unpredictable. His Bach seems never to have been hurried. Absolved and de-traditionalized, his Chopin is provocative: no greater unsung miracle of gramophone history exists than his E minor Study from Op 25, an account chilling in the solitude of its chromatic emphasis.

Busoni was one of the last of that line of Romantic pianist-composer-transcribers first glorified in the 1830s by Liszt and Thalberg. Paradoxically, however, his motives for transcribing were different from those of his predecessors. Whereas they arranged (in forms concerned with preserving the substance of an original) so as to make accessible (however relatively) music otherwise unfamiliar (Liszt’s partitions of the Beethoven symphonies, for example), he transcribed (in forms concerned more particularly with the communication of his own perception of the spirit of the originals he was investigating) so as to re-illumine music otherwise already well known. Busoni trans-cribed/-formed to learn about his instrument: to make difficult music even harder was one of his pedagogic goals—because, as his exercises based on the first volume of Das wohltemperierte Klavier make clear, to master the most exacting pianistic patterns and combinations is to be given a key to technical perfection. Once you have technical perfection, only then can you devote your energy to the real issue that matters, interpretation. The transcription process was also used by Busoni to learn about composition. Taking the music of others to elaborate new extravaganzas of his own making challenged his inventive capacity.

Busoni’s forerunners—Liszt, Tausig, Stradal, Raff—transcribed Bach’s organ works in ways that sought to imitate organ sound and style in pianistic terms. Busoni didn’t. Compared with the texts (and even the structures) of his sources, his re-fashionings are different in countless details, sometimes so free as to become new compositions in their own right. In the D minor Toccata and Fugue (1900), for example, the themes and harmonies and physical length may be the same as Bach’s, but the registration, the tessitura, of every other chord, every other melodic statement, is Busoni’s. Like the ten Chorale Preludes (1907/09)—in particular Nun freut euch, lieben Christen gmein, a brilliant re-creation that turns the music into a dazzling étude straight out of the nineteeth century—the later Capriccio (dedicated to Schnabel) carries this principle a stage further. Here we find Busoni placing a premium on atmosphere and expressive tension, on thematic expansion and written-out decoration, on flights of fancy and re-alignment (in particular the Schumannesque alla marcia and the closing fugue). Of its period (1915) it gave the vitality of Bach’s art a peculiar currency and timelessness. Empires, the world, may have been crumbling around him, but in the hybrid poetry and prose of such music Busoni’s dialogue is with another, braver, age to come.

In fixing a personal understanding of the sound and message of Bach, in notating his own pianistic realization for posterity never to forget, in trying to establish a living likeness rather than a dying memory, Busoni’s view of transcription as a phenomenon of radical re-orientation is quite unlike anyone else’s. Justly, what he left is neither Bach arranged Busoni nor Busoni after Bach but simply Bach-Busoni: the division of responsibility is equal, the hyphen meaningful.

A final point. The impression these masterpieces convey is one of music highly coloured, of music that uses all the registers, dynamics and physical combinations possible with large hands and responsive feet on a modern Steinway. As much as anything, colour is due to how notes are approached and departed, and to the musical and physical space that surrounds them. Busoni, a man, uniquely, who could make colours a ‘reality’ out of ebony and ivory by creating timbral contexts to play on the imagination of his performers and listeners, wrote for the piano in ways orchestral, statuesque, cathedral-like. Yet, unlike others, he never showed any interest in confiding his castings to orchestra. With an orchestra, however apparently broad its scope, you are in the end confined by the human limitations, the collective conscience, of the medium, by what, in fact, is its very finiteness. Your freedom becomes less. With the piano, on the other hand, you only have yourself to hold accountable. How you judge what you want, the measure of what you achieve, when you weave your spells, axiomatically, are factors solely within the infinity of your own power, no one else’s. Busoni, alchemist that he was, realized such fact only too well. Enough to fill the mines of Solomon, the riches of his kingdom—epic and bronzed as the Toccata, Adagio and Fugue (1900), poignant and veiled as Ich ruf’ zu dir, Herr Jesu Christ—are many and bejewelled.