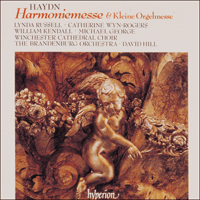 ‘Don't buy it unless you are prepared to love Haydn's glorious masterpiece even more than you do now’ (Fanfare, USA)

When the English musician and writer Charles Burney visited Vienna in 1772 he was particularly impressed with the city’s church music: ‘There is scarce a church or convent in Vienna, which has not every morning it’s mass in music: that is, a great portion of the church service of the day, set in parts, and performed with voices, accompanied by at least three or four violins, a tenor and a base, besides the organ.’ This intense cultivation of figuraliter – instrumentally accompanied – church music contributed a great deal to Viennese musical life, as it still does today. A few years later another Protestant visitor to Vienna, the Prussian bookseller Friedrich Nicolai, wrote in astonishment that he ‘certainly could hear the music for three or four Masses on Sundays and holidays’, since each church had a different starting time. By this means, freelance musicians were able hold several church jobs at once: in old age the young Joseph Haydn told one of his biographers that, in his youth, he had filled up his Sunday mornings by playing the violin for the Brothers of Mercy at 8am, playing the organ at Count Haugwitz’s chapel at 10am, and by singing at St Stephen’s Cathedral at 11am. Haydn wrote some of his first music for these hectic Sunday mornings; indeed, a Missa Brevis in F, written when he was about seventeen, may be his earliest surviving work.

The young Haydn was heir to a tradition of figuraliter church music that was, by 1750, about one hundred and fifty years old. Around 1600 Giovanni Gabrieli and other forward-looking composers in northern Italy began to write psalms, motets and Mass settings that did not just use instruments to double the voices – a practice well established by the end of the fifteenth century – but allowed them independent parts, alternating or combining with the voices, the whole supported by the new-fangled continuo. At first, as in Monteverdi’s 1610 ‘Vespers’, the instrumental ensemble was large and colourful, but by the 1630s a standard ensemble had emerged, consisting of two violins and continuo, with the option of cornett and trombones doubling the voices. Subsequent developments in Italy tended to increase the ensemble to orchestral size – as Vivaldi’s church music shows – but the ‘church trio’ (performed with single or doubled strings according to circumstances) remained a popular scoring in Catholic countries north of the Alps: it was often used by Mozart and Haydn, and there are still parts for trombones to double the lower voices for some of Mozart’s church music.

Haydn’s Missa Sancti Joannis de Deo seems to have been composed in the mid-1770s for the chapel at Eisenstadt of the Brothers of Mercy – the order founded in the sixteenth century by St John of God. It uses the ‘church trio’ scoring, and has the nickname ‘Kleine Orgelmesse’ (‘Small Organ Mass’) because there is a charming organ solo in the Benedictus – a device often used at the time in small-scale church music to compensate for the lack of woodwind instruments. The work is also a typical ‘Missa Brevis’ in that the four voice parts sometimes sing several different sets of words at the same time in the Gloria and Credo. This odd practice, devised to reduce the length of the long movements of the Mass, was frowned upon later in the century, and a number of attempts were made to elongate the Gloria, including one by Haydn’s brother Michael. The Mass evidently retained its popularity into the nineteenth century, for Johann Georg Albrechtsberger wrote a new Benedictus for it, replacing the old-fashioned organ solo, and the whole work was eventually given parts for clarinets, bassoons, horns and trumpets for performance at Eisenstadt. It is not hard to see why so much trouble should have been taken to update it, for it has, in the words of H C Robbins Landon, a ‘quiet spirit of devotion, even of mysticism, that is most appealing’.

The decades that separate the Missa Sancti Joannis de Deo and the Harmoniemesse brought great change to Austrian church music. Musical life was becoming increasingly centred on the concert hall and the opera house, and few composers in the intellectual mainstream around 1800 can have remained unaffected by the rationalist philosophies of the Enlightenment. Haydn became a freemason in the 1780s, but he seems to have retained his simple faith throughout his life. And Haydn’s sequence of six late Masses are virtually the last works in the liturgical tradition that are also masterpieces in the mainstream of Western music. Nevertheless, Haydn, like other Austrian musicians, was profoundly affected by successive reforms of church music during his career. The empress Maria Theresa limited the use of trumpets and timpani in the Mass during the 1750s. More serious, in 1784 Joseph II, as part of a wide-ranging attempt to reform the church according to his Enlightenment ideas, decreed that instrumental ensembles were only to be allowed in Masses on Sundays and Feast days. As a result, Mozart wrote no Masses between his unfinished C minor of 1782/3 and the Requiem of 1791, while Haydn wrote none between the Missa Cellensis of 1782 and the Missa Sancti Bernardi von Offida of 1796. By then Joseph’s decree had been revoked by his successor Leopold II, and the climate was once again favourable to elaborate concerted Masses.

Haydn’s late Masses were written for successive celebrations of the name day, 8 September, of Maria Hermenegild, the wife of his employer Prince Nicolaus Esterházy; they were performed under Haydn’s direction in the Bergkirche at Eisenstadt. The Harmoniemesse is the last of the series, and is his last completed work of any size. It evidently cost the aged composer a great deal of effort, for on 14 July 1802 he wrote to Prince Esterházy that he was ‘labouring wearily on the new Mass’. For Princess Esterházy’s name-day in 1803 he was not pressed to compose another Mass, and his Stabat mater of 1767 was given instead. Nevertheless, the Harmoniemesse is a work of great grandeur and elaboration, and there is no sign that the composer’s powers were in decline. The work was given the title ‘wind-band mass’ not because it needs more wind instruments than the rest of his late Masses – only a flute is added to the clarinets, oboes, bassoons, horns and trumpets – but because they are used in an unusually prominent way. We are accustomed to prominent wind solos in Mozart, but Haydn was a generation older, and retained the spare orchestral writing of his youth for much of his career, with the wind doubling or just reinforcing the strings. It was not until Haydn became accustomed to writing for large orchestras during his visit to London in the 1790s that passages such as the clarinet solo at the opening of the ‘Et incarnatus’ became common in his music.

If Haydn tended to be conservative in his orchestration, he led the way in matters of structure. Until Joseph II’s reforms halted the production of orchestral Masses in 1784 Austrian composers still laid out their large-scale works in the Baroque manner, dividing the sections into a string of separate choruses and arias. When the production of figuraliter Masses resumed under Leopold the old ‘cantata’ structure was felt to be hopelessly old-fashioned, and new models were looked for. Haydn’s solution was to divide the sections into fewer, longer movements, and to organize them using structural devices borrowed from the Classical symphony and the concerto. Thus the Kyrie of the Harmoniemesse is set as one mighty slow movement, incorporating solo and chorus sections, while the Gloria and Credo are each divided into three movements – as late as 1782 Mozart had divided the Gloria of his C minor Mass into no fewer than eight movements. Martin Chusid has even proposed that the entire work should be thought of as the equivalent of three symphonies, the first consisting of the Kyrie and the Gloria, the second the Credo, and the third the Sanctus, Benedictus and Agnus Dei. It is perhaps significant that Haydn did not write any more conventional symphonies after his return from London in 1795, for the annual series of Masses for Princess Esterházy provided him with a larger canvas for his symphonic ideas. Haydn’s late works provided the model for the subsequent development of the Viennese Mass in the hands of Hummel, Beethoven and Schubert, but by then church music had been relegated to the periphery of Austrian musical life.