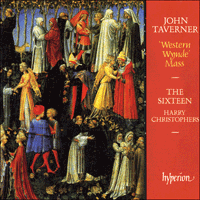 Votive antiphons were sung as part of the extra-liturgical devotions observed after the late evening service of Compline. Before Taverner’s time these were invariably addressed to the Virgin Mary, but from the late 1520s there was a discernible trend towards the composition of so-called ‘Jesus’ antiphons, and four of Taverner’s surviving antiphons are in this category.

O splendor gloriae, the final sentence of whose text refers to the Trinity, may well have been associated with Cardinal College whose statutes required the daily singing of antiphons to the Trinity and St William of York, as well as the Virgin Mary.

O splendor gloriae is in many ways the finest of Taverner’s large-scale antiphons. Particularly noteworthy are its clarity of texture and extensive use of imitation. So pervasive and systematic is the imitation in some passages that it led one late sixteenth-century copyist to ascribe the work jointly to Taverner and Tye, a view rejected by modern scholars on the grounds of its stylistic consistency. Another ‘progressive’ feature is the occasional repetition of text in the latter part of the piece, reflecting the gradual trend away from an abstract melismatic style towards a more directly expressive ‘Renaissance’ manner. The sectional structure, contrasting reduced ‘soloistic’ combinations with full five-part sections which exploit the high treble compass, is characteristically English in conception, and the work stands as testimony to the vocal and musical accomplishments of pre-reformation choral foundations.

The Te Deum is one of the most ancient hymns of the Christian Church. It was traditionally sung at the end of Matins on Sundays and major feasts, as well as on special occasions of rejoicing or thanksgiving. In view of this it is perhaps surprising that so few polyphonic settings of the Latin version have survived; perhaps the length of the text acted as a deterrent. In performance it was treated in the same way as a psalm, with each side of the choir taking alternate verses, a practice reflected here in the alternation of plainsong and polyphony.

The sectional structure of the text: a hymn to the Trinity, a passage in praise of Christ (‘Tu rex gloriae, Christe’), followed by a short antiphon (‘Aeterna fac’) leading into the final section, entails changes of chant, though not of mode, and these changes are of course retained in the polyphonic setting.

The only source of Taverner’s Te Deum is the set of part-books compiled by the Windsor lay clerk John Baldwin and dated 1581, from which the tenor part is missing. The restoration of this part is a fairly straightforward matter since it carries the chant in regular rhythm in every verse except ‘Aeterna fac …’ where the chant migrates to the bass. We may suppose from the extensive use of imitation, as well as the clarity of the part-writing and text-setting, that this is a late work, perhaps composed after Taverner had left Oxford, though whether it was written for a special occasion and what that occasion might have been we cannot now say. Taverner’s mastery of contrapuntal invention is evident in the variety of material he finds to surround the simple chant melody. The full five-voice texture is used throughout, and the scoring is low, which suggests that an adult choir, without boy trebles, was envisaged.

In common with other large churches, a daily Lady Mass was celebrated at Cardinal College, and several works by Taverner for this liturgy have survived. These include two settings of Alleluias, whose liturgical form requires the alternation of soloist and chorus. Before Taverner’s time it was customary for composers to provide polyphony for those parts of the chant allocated to the soloist—a natural enough course when the performance of polyphony was the preserve of relatively few singers. This arrangement is reversed in a number of Taverner’s works, so that it is the choral part of the chant which is set to polyphony.

In Alleluia. Veni, electa mea Taverner only provided music for the Alleluia and its jubilus or melismatic extension, but it is clear from instructions given in a setting of the same text by Nicholas Ludford (c1480–c1542) that the same polyphony should also be used for the choral part of the verse, ‘speciem tuam’. The performance recorded here conforms to the liturgical practice of Taverner’s time, including the use of two singers for the ‘solo’ portions of the chant. The top voice carries the chant melody, in mostly equal note values, a feature shared by a number of Taverner’s liturgical settings, while the three lower voices, after some initial snatches of imitation, provide a rhythmically animated and varied free counterpoint. Taverner responds to the spirit of the jubilus with a succession of overlapping scale passages which create a fine sense of climax.

The Western Wynde is perhaps the best-known of all Taverner’s masses, partly for the ingenuity and clarity of its structure, but also more especially for its tunefulness. Moreover, it was evidently admired in its own day, since the younger composers Tye and Sheppard, probably in emulation, based masses on the same theme. The melody on which Taverner based his mass is of unknown provenance. It is clearly a secular tune which enjoyed some popularity but which does not occur in any of the few surviving sources of the early sixteenth century. There is a song whose text begins ‘Westron wynde when wyll thow blow’ in a manuscript in the British Library, and although its tune bears some similarities to Taverner’s, these might easily be no more than the common stylistic mannerisms of the period.

The Western Wynde may be the earliest mass composed in England to be based on a secular melody, although the practice had been common on the continent since the time of Dufay. The use of popular tunes in sacred music was advocated by Luther, and this, coupled with some internal stylistic factors, has led to the suggestion that the Mass belongs to Taverner’s Oxford years when he came into contact with advocates of the ‘new learning’. On the other hand, part of the Agnus Dei occurs in keyboard format in a manuscript which may date from as early as 1520, and which seems to have some association with Court circles. If the Mass does date from early in Taverner’s career, its progressive style and originality of design are even more remarkable.

The melody occurs nine times in each of the four movements (the Sanctus-Benedictus being a formal entity). Heard first in the top voice it subsequently moves to the contratenor or bass, while broadly similar changes of scoring and metre occur in each movement. The result is one of the most closely unified of all English cyclic masses. As was customary in England the Kyrie was not set, probably because its text would vary according to the feast or season. Taverner also left out part of the Credo text, from ‘Et in Spiritum sanctum’ to ‘in remissionem peccatorum’—again a peculiarly English practice which has never been satisfactorily explained, although Hugh Benham has suggested that such omissions arise from the early fifteenth-century practice of ‘telescoping’ or overlapping phrases of text, such portions then being abbreviated or even cut out entirely by subsequent copyists.