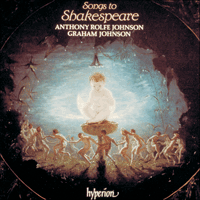 It is doubtful if any writer's work has provided more subject-matter for music than the plays and poems of William Shakespeare. There are more than 20,000 items listed in the recently published Shakespeare Music Catalogue of Gooch and Thatcher (Oxford University Press).

Whether it be the plays themselves that have become the basis for operas, musicals, ballets, symphonic poems, symphonies and programmatic overtures, or the lyrics that play such an important part in his dramatic armoury that have provided material for countless glees, partsongs, and solo songs, Shakespeare has been a source of continuous inspiration. Nor is it only the English-speaking composer that has been drawn by his magnet. Shakespeare's appeal has been, and still is, universal. Thus we can experience Othello's tragedy through Verdi's eyes, and the story of Romeo and Juliet's ill-starred love through the eyes of a Bellini, a Berlioz, a Gounod, a Bernstein, or a Prokofiev — each adding a personal point of view to the archetype fixed forever by the elusive Bard of Avon.

To the composer of songs, the lyrics in Shakespeare's plays have proved irresistible. They are everything that a good lyric should be: memorable and pithy; thoughtful without being so complex as to make music an irrelevance; rhythmically varied, yet regular enough for easy verse repetition; adaptable, or so it would seem, to every musical style there has ever been or is ever likely to be. And for as long as it matters, they have been out of copyright! The composer who has not set at least some of them to music is so rare as to be almost unimaginable.

Precise evidence of the settings used in the original Globe productions is difficult to come by. The chances are that Shakespeare, like other dramatistis of the time, simply accomodated his words to existing tunes — as in the case of Desdemona's 'Willow' song. But some scholars have ventured an opinion as to an original composer: Robert Johnson (1583-1633), court lutenist, is known to have made settings for Cymbeline, A Winter's Tale, and The Tempest. Although seventeenth-century composers made settings of Shakespeare's lyrics for contemporary productions and operatic adaptations (Purcell's contributions are outstanding examples), their use as materials for independent songs is largely a phenomenon of the eighteenth century and onwards. It is this almost inexhaustible mine of musical treasures that the present selection explores.

John Christopher Smith (1712-1795) was the son of the Johann Christoph Schmidt who acted as Handel's principal copyist. England was his home from 1716 and his all-purpose career was typical of the times. His highly imaginative Shakespeare settings come from operatic versions of A Midsummer Night's Dream, which reached the London stage in February 1755 under the title 'The Fairies' (Shakespeare 'improved' by Dryden and Milton among others), and The Tempest, which was staged almost exactly a year later.

Though later published in various collections, Thomas Augustine Arne's Shakespeare songs were also written for stage productions — mainly those of David Garrick at Drury Lane, beginning in 1740 with The Tempest and As You Like It. The music for Love's Labour's Lost is dated by some authorities at 1747, while others (including the magisterial Shakespeare Music Catalogue) deny its authenticity. Arne (1710-1778) was a master of simple, spontaneous melody (in this instance overlaid with delicate ornamentation), and many of his settings, in their plain versions, have been raised to the status of national songs.

Haydn's 'She never told her love' was not designed for the theatre, but was composed in October 1795 and published as part of his second set of Six Original Canzonettas. It is unusual in that it is not a lyric as such, but lines from a speech — Viola's to the Duke Orsino in Act II of Twelfth Night. Haydn's broader, operatic approach, with its dramatic, through-composed form, brings out the pathos of Shakespeare's words in the most powerful manner; the postlude is curiously prophetic of the piano writing in Schubert's Nacht und Träume. By the time Haydn made his setting Shakespeare was well on the way to becoming a god — Garrick's extraordinary 'Shakespeare Jubilee' at Stratford on Avon (September 1769) having settled the matter in the public mind once and for all.

Shakespeare lyrics also attracted the attention of comparatively minor composers. John Addison (1766-1844), double-bass player and cellist at the Italian opera and Vauxhall Gardens, singing teacher and composer of several operas, is one; as is William Linley (1771-1835), the youngest son of Thomas Linley's family of Bath musicians — as famous for their good looks as their musical talents. Linley served with the East India Company for many years, but in 1815 and 1816 published two volumes of Shakespeare's Dramatic Songs, consisting of 'the songs, duets, and choruses, in character, as introduced in his Dramas.' Both composers produced elegant, stylish settings, Addison's being particularly noteworthy for allowing the vocal tessitura to point the difference between 'high and low', and Linley's for the slightly grotesque twist he gives to Autolycus's words.

Almost nothing is known of John Major, not even his dates, and even the catalogue of Gooch and Thatcher treats him as no more than a marginal figure. He is sometimes known as John Stenson Major to differentiate him from his father, also John, who was a famous bookseller and publisher of the 1820s and '30s. His setting of the sonnet from Act IV of Love's Labour's Lost was published in 1864 but probably dates from much earlier. The music has an air of donnish pedantry, as if to depict the character of Sir Nathaniel who sings it — but Costard also points out in the play that Nathaniel, for all his bookishness, is 'an honest man … a marvellous good neighbour … and a very good bowler.'

John Clifton (1781-1841) is less obscure. He worked as a composer, pianist, and teacher variously in Bath, Dublin, and London. His setting of the opening lines of Twelfth Night dates from 1802 and is virtually an operatic scena, and as such intensely dramatic, especially in the importance it gives to the accompaniment which is written for piano or harp. His publisher, perhaps taking a cue from Haydn, described it as a 'canzonet'.

Sir Henry Bishop (1786-1855), the first composer to be knighted for his services to music, dominated what passed for British opera in the first half of the nineteenth century — mostly plays with varying amounts of music, often cannibalized from other composers. Though reckless in its inconsequential repetition of Shakespeare's words, his setting of 'O happy fair!' has much charm. It seems to be a solo arrangement of what was originally a three-part glee.

British composers of the second half of the nineteenth century were not only more adventurous than their eighteenth-century counterparts, but infinitely more serious about their art. The simple, folk-like melody that had served Arne and his contemporaries gave way to a more thoughtful 'art song', much influenced by German models, in which the piano accompaniment is as important as the vocal line. Parry (1848-1918), the greatest of all Elgar's precursors. was drawn to the Shakespeare Sonnets as much as to the shorter lyrics. His Four Shakespeare Sonnets were published in 1887 in both English and German. (It is a measure of Parry's punctilious approach to prosody that each of the separately printed vocal lines has a different melodic rise and fall, governed by the language.) These settings demonstrate that the compacted thought processes of the sonnet form can, in the right hands, be translated into powerful and utterly convincing music — though whether Richard Simpson (d1876), who contrived to set all 154 sonnets, achieved as much is a matter of opinion!

Stanford's neat interpretation of 'The rain it raineth every day' is the third of a set of Three Shakespeare Songs published in 1896. Delicate melismas enliven an elegant vocal line which is underpinned by subtly different harmonies for each verse; Stanford was perhaps the most skilled craftsman of his day. William Aiken (1857-1939), on the other hand, was a skilled amateur: a surgeon by profession, and authority on the science of phonology. This setting of Sonnet XVIII (1911) has something of the lofty, noble manner of Elgar with a demanding legato line for the singer.

Shakespeare settings by British composers of the first half of the twentieth century maintain their immediate predecessors' seriousness of purpose, but with a lighter and more varied hand. Roger Quilter (1877-1953) was the quintessential Edwardian salon composer, dispensing charm and delicately perfumed melancholy in the most pleasing manner. He published four sets of Shakespeare songs, from the first of which (Three Shakespeare Songs, 1905) comes the tender setting of 'Come away, death' — the others belonging to the Five Shakespeare Songs of 1921. Vaughan Williams's touching and memorable version of 'Orpheus with his lute' was published in 1903, though not performed in public until December the following year. He set the text again in 1925; it is hardly surprising that this poem which apostrophises the magical power of music itself should have appealed to many composers. The setting of 'When icicles hang by the wall' which Balfour Gardiner (1977-1950) published in 1912 is unusually rumbustious and macabre — evidently taking its cue from the 'staring owl' and the dissonant clatter as 'Greasy Joan doth stir the pot'. Also in 1912 John Ireland (1879-1962) published the cycle Songs of a Wayfarer, of which 'When daffodils' is the second number. The setting itself was probably composed in 1905. Herbert Howells (1892-1983) included 'Under the greenwood tree' in his 1928 song cycle for high voice, piano or orchestra, In Green Ways. Its harmonic ambiguities, almost oriental in effect, mark it out as a refreshingly different approach to a much-set lyric. It was his own second setting, the first of which he turned into a partsong (1918).

As might reasonably be anticipated, settings by later twentieth century British composers are more eclectic in style, ranging from the anashamedly neo-romantic approach of Mervyn Horder asking the tenor to sing for all he is worth, to the artful simplicities of Tippett's visionary Songs for Ariel composed in 1962 for an Old Vic production of The Tempest, and originally designed for accompaniment by a small ensemble of flute/piccolo, clarinet, horn, harp, harpsichord and percussion. Tippett thought well enough of these powerful dream-like settings to quote from two of them in his opera The Knot Garden (1969).

Britten's ecstatic and wonderfully breathless setting of 'Tell me where is fancy bred' came into existence in 1961 in response to Marion, Countess of Harewood's request for a contribution to Classical Songs for Children (later republished as The Penguin Book of Accompanied Songs) which she was editing, and to which she also persuaded Kodály and Poulenc to add their voices. Geoffrey Bush's suave setting of 'Sigh no more, ladies' is the third of his Three Elizabethan Songs and was composed in 1947.