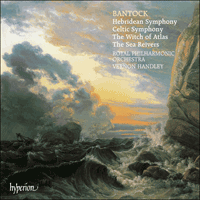 ‘Magnificently recorded and performed. When audiences are crying out for 'melodious music' how can such music as this have been ignored for so long?’ (Gramophone)
‘A towering classic, as important as a landmark in the rediscovery of British music as it is a monument to the technique of orchestral recording. Music, performance, recorded sound and notes are all superb’ (International Record Review)
‘The Royal Philharmonic Orchestra performs magnificently from beginning to end, coupling elegance, eloquence, passion, and poser with Hyperion's fastidious sound in a way that compels admiration from the listener for conductor, ensemble and composer alike. Handley's is the definitive version of the Hebridean Symphony, outstripping that available on Naxos in every regard, and with the other works on this disc to further commend it, this release sails effortlessly into port as the newest inductee into Fanfare's Classical Hall of Fame’ (Fanfare, USA)
‘The best Bantock record I have ever heard’ (CDReview)
‘Superb’ (Amazon.co.uk)
«Ce disque superbe ravira les mélomanes romantiques curieux» (Répertoire, France)

Although Granville Ransome Bantock showed an obvious talent for music, his father, an eminent London surgeon and gynaecologist, forbade him to make it his profession. Only after demonstrating his complete indifference to a lucrative career in the Civil Service was he allowed to become a student of the Royal Academy of Music. There (1889–1893) he studied composition with Sir Frederick Corder, widely regarded as a man of progressive musical sympathies. He proved to be an apt pupil, and an exceedingly ambitious one. Music on the grand scale poured from him, including fourteen of a projected cycle of twenty-four symphonic poems on Southey’s Indian poem The Curse of Kehama.

On leaving the Academy Bantock founded and edited The New Quarterly Musical Review, but gradually became involved in conducting—including a world tour of George Edwardes’s A Gaiety Girl and a British tour of Stanford’s Shamus O’Brien. The experience proved invaluable and in 1897 he accepted the post of Musical Director of The Tower, New Brighton. There he found little more than a scratch band accustomed to playing music of the most trivial kind. With typical energy and ambition he began to transform the situation, enlarging the orchestra, improving its competence, and persuading sceptical local authorities that concerts of classical music were no less important than an endless diet of marches and waltzes. Soon Merseyside audiences were listening to Wagner and Liszt as well as Johann Strauss and Waldteufel. Even more amazing was a series of concerts devoted to the music of living British composers. Though he continued to champion the cause of British music throughout his life, Bantock was also keenly interested in contemporary European composers—Debussy, Richard Strauss, and, most particularly, Sibelius who, in gratitude, dedicated his Third Symphony to him. He was, in short, a musician of exceptionally wide sympathies and singular energy. He also proved to be an outstanding educator, first as Principal of the Birmingham and Midland Institute of Music (1900–1914), and also (1908–1934) at Birmingham University as Peyton Professor in succession to Sir Edward Elgar.

Throughout his life Bantock was a prolific composer of works on the largest scale, works that were often heroic or exotic in theme and substance. Like many of his contemporaries he was deeply influenced by Liszt and Wagner, and it is no accident that much of his work is either programmatic or dependent on words. The most obvious comparison, at least so far as programme music is concerned, is with Richard Strauss (four years his junior), whose equal in matters of orchestral wizardry he most certainly proved to be. Where he differs from Strauss is in the attention he paid to choral music—an inevitable bias that reflects the importance of that medium in British musical life at the turn of the century. Bantock was a man of wide culture—an omnivorous reader (master of French and German, Persian and Arabic, as likely to correspond in Latin as in English), and subject to sudden, all-consuming enthusiasms. Chief among these were his abiding interest in all things Oriental—both Near and Far East—and, in acknowledgement of his own Highland ancestry, his passion for all things Celtic. These enthusiasms, which influenced his personal behaviour and style of living almost to the point of eccentricity, led to equally idiosyncratic musical expressions. Among the more extravagant was the enormous three-part setting for soloists, chorus and orchestra of Edward Fitzgerald’s version of the Ruba’iyát of Omar Khayyám, composed between 1906 and 1909. Unfortunately, grandiose works of this kind are no longer in fashion, nor do most of the themes that fascinated Bantock seem relevant to present-day preoccupations. The long procession of his tone poems, choral works, songs and partsongs lies forgotten, awaiting the time when perhaps he can be reinstated as a composer of genuine stature and individuality. Fortunately his Celtic works, which culminated in the Hebridean Symphony and the opera The Seal Woman, present less of an aesthetic problem to our modern susceptibilities. Moreover, they seem to have struck a much deeper vein in the composer’s emotional response and, for all their Straussian orchestral opulence, have a fundamental simplicity that has ensured a certain freshness and immediacy. It is through them that a revival of interest in Bantock’s music is therefore most likely to take place.

Completed on 16 September 1940, the Celtic Symphony is a late work. But old age did not reduce Bantock’s visionary powers, nor modify his tendency to proceed on the grand scale. Though calling, modestly enough, for a string orchestra (divided usually into seven parts), Bantock then suggests that no fewer than six harps are to be preferred if the work is to make its proper effect (and six are used in this recording). Such demands have undoubtedly prevented the symphony from assuming the place in the repertoire—alongside Elgar’s Introduction and Allegro and Vaughan Williams’s ‘Tallis’ Fantasia—that its beauty and craftsmanship ought to have assured it.

Like most of Bantock’s Celtic works the symphony makes use of Hebridean folksong—as collected by Marjory Kennedy-Fraser and published between 1909 and 1924. In this instance the song is ‘Sea-Longing’ (An Ionndrainn-Mhara), and its opening lines, ‘Sore sea-longing in my heart / Blue deep Barra waves are calling’, give a sufficient clue to the unstated programme that informs the work. Though it is presented as one continuous movement, the various sections correspond to the contrasts that are found in the normal symphony. A spacious slow introduction (Lento sostenuto), in which the lower strings whisper a brief, chant-like theme, leads to a vigorous section (Allegro con fuoco) in which a bold unison theme is offset by a theme of swooning, lyrical intensity. The slow introduction returns as herald to the equivalent of a symphony’s slow movement (Andante con tenerezza) built upon the yearning Hebridean folksong. This in turn gives way to a vigorous, scherzo-like section (Allegro con spirito) which explores, with Bartókian savagery, the energetic rhythms of a Highland reel before exploding into the final section (Largamente maestoso), a full-blooded and magnificent apotheosis of the chant-like theme from the slow introduction.

The work was dedicated to the conductor Clarence Raybould (one of Bantock’s earliest pupils) and seems to have received its first performance in a BBC broadcast in 1942.

The Witch of Atlas, Bantock’s Tone Poem No 5, is a particularly effective example of his preoccupation with the interpretation of unusual subjects. It was composed in 1902 and first performed on 10 September at the Worcester meeting of the Three Choirs Festival; the composer himself conducted. The subject is derived from Shelley’s poem of the same name, Bantock choosing a mere 44 of the 672 lines the poet had written at white heat between 13 and 16 August 1820. The 44 lines are printed in the score with letters identifying the relevent passages in the music.

This selection by-passes much of the wizardry and mischief of the Witch, not to mention the strange hermaphroditic companion she creates (a typical Shellean image of bisexual creativity), concentrating instead upon her seductive beauty and beneficence. This Bantock depicts by means of a rising, Mahlerian theme announced at the outset by solo violin against a background of tremolo strings, which becomes the main thematic source for the whole piece. Despite a brief, riotous central passage, the dominant mood is that of ecstatic, sensuous longing. In any other country such a work would have become a staple item in the romantic orchestral repertoire.

At its first performance, in London’s Queen’s Hall on 21 February 1920, The Sea Reivers was described as a ‘Hebridean Sea-Poem’. Though Sir Henry Wood was the concert’s principal conductor (the programme included the first performance of Delius’s Concerto for violin and cello), Bantock took charge of his own work. Composed in 1917, it is a concise, vigorous scherzo based on ‘A Hebridean Sea-Reiver’s Song’ (Na Reubairean). This had also appeared in the Kennedy-Fraser collection, and expresses the wild exultation and daring exploits of the Hebridean pirates. At first only hinted at, the song soon appears in its entirety in tumultuous and vivid orchestral colours. According to ‘Grove V’, The Sea Reivers was originally intended as the scherzo section of the Hebridean Symphony. Although no mention is made of this in the composer’s programme notes for the first performance, it would seem very likely as the work is unusually brief for Bantock.

Of all Bantock’s Hebrides-inspired works, the Hebridean Symphony is undoubtedly the finest and most powerful. It was completed in 1913 and first performed, under the composer’s baton, on 14 February 1916 at a concert in Glasgow. It made an immediate impression and was among the first batch of British works to be published in full score by the Carnegie United Kingdom Trust. Like the Celtic Symphony it is cast in one continuous movement, but the division into separate sections is now more obvious, for each section has its own programme. Thus the opening is dreamy and atmospheric, conjuring up images of sea mist and ancient legend, pierced by the sudden magnificence of bright sunlight. Brief hints of distant storm provide an effective contrast. The principal theme for this section is derived from ‘The Seagull of the Land-under-Waves’, heard first as a low murmur in the basses but gradually involving the entire orchestra in a Tristan-esque outburst of great splendour. The section ends as quietly as it began, merging gradually into a species of violent scherzo—beginning with a heaving string passage that swells into a raging storm. Out of the turmoil loom marauding ships: the opening bars of the song ‘Kishmul’s Galley’ resplendent on unison horns. This, the third section of the symphony, exploits the brass with a virtuosity worthy of Janáek and culminates in a powerful climax as the trumpets repeat over and over again a three-note motif derived from a Highland pipe tune, ‘The Pibroch of Donnail Dhu’, in graphic description of the clansmen gathering to ward off the invaders. The symphony’s opening section then returns in a passage of wistful melancholy that ushers in the final section in which the last of the Hebridean songs, the ‘Harris Love Lament’, is quietly announced by the horns and gradually expanded into a Bardic Song of Victory. A final coda that touches upon all the main themes brings the symphony to its conclusion—Bantock’s Hebridean vision fading into the silence from which it emerged.