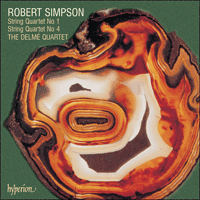 ‘When it comes to recordings of British string quartets there've been few more impressive achievements than Hyperion's Robert Simpson cycle’ (BBC Record Review)
‘Superbly done by the Delmé Quartet’ (The Guardian)
‘All of Robert Simpson's quartets are worth hearing. Don't ask for a recommendation of where to start! But do start, somewhere’ (Fanfare, USA)
‘Fans of the composer, and all those who care about the continuance of the string quartet tradition, needn't hold back. These issues are self-recommending’ (CDReview)

The two genres most important in Robert Simpson’s impressive output are the quartet and the symphony. It is therefore interesting to observe that his String Quartet No 1 and Symphony No 1 were begun in the same year, 1951. The quartet shares two significant features with the symphony; it displays the principles of ‘progressive’ or ‘emergent’ tonality, and presents a conflict between the same two keys, A and E flat.

The first three quartets, all written within a space of three years, form a trilogy, though each work has a unique structure: No 2 is a highly original one-movement work compressed into three parts, whereas No 3 contains two movements – a brief but sorrowful adagio, followed by a very large, energetic sonata-allegro. No 1 is in two movements also, but they are of equal weight and incorporate elements of slow and fast tempi.

The first movement of String Quartet No 1 begins gently in E flat with a theme reminiscent of the opening of Haydn’s ‘Lark’ Quartet and is freely contrapuntal in design. At length, there is a sudden forte outburst on unison viola and cello, and the movement gains in urgency and intensity. Consequently, the key of E flat gradually loses its stability until, after an extended burst of activity, the music arrives at a muscular fugato, begun on first violin, that propels the argument torwards its opposite pole, the key of A. When this is reached, there is a modified reprise of the opening, now in A, and the music returns to its former tranquillity and innocence. However, A cannot gain the upper hand for long, and disturbances are caused by little fragments from the fugato invading the calm texture. As they build towards the final climax of the movement, A loses its hold, and E flat regains control, though a sense of conflict still remains.

The second movement begins with a set of seven variations on a palindromic theme for solo viola. (Palindromes have remained a crucial component in Simpson’s work, culminating in the monumental String Quartet No 9 of 1982, which is cast as thirty-two palindromic variations on a palindromic minuet by Haydn.) Even though this viola theme is unharmonized, it clearly traces the same tonal outline as the first movement, starting in E flat, rising to A at its mid-point, and falling sadly again to E flat. Each of the seven variations, which are strictly palindromic, follows this course, and the result is a prolonged effort to establish the key of A, but each attempt is baffled. Despite this, the opening variations breathe a serene lyricism, following one another in an inevitable sequence. Tension rises in the third variation and accumulates through the ensuing three variations until a severe crisis is reached in the seventh. Because of this, the music is forced to break free from the structure of variations, and Simpson hurls the listener into a turbulent double fugue as the two opposing keys collide with maximum force. A major is the victor, and the first violin, as if released, flies into excited running passages. The intensity subsides as the composer introduces a final reminder of the first movement’s opening theme, decorated at a late stage by delicate arabesques from the violins. The coda is a naive, innocent dance of almost Haydnesque simplicity, the key an unclouded A major. Robert Simpson once remarked that he composed these closing pages at one stretch, on a sunny afternoon in Regent’s Park: ‘Perhaps there is something wistful about the music,’ he says, ‘hence the marking poco pensoso’. The attentive listener might even detect a veiled quotation from a Beethoven symphony amidst these peaceful sounds.

Robert Simpson’s String Quartets Nos 4, 5 and 6 were written as extended variations on the three Beethoven Rasumovsky Quartets, Op 59. Despite the composer’s statement that ‘if these quartets enhance understanding of the genius of Beethoven at their own expense their purpose will be served’, it is crucial to emphasize that neither the intention nor the result is stylized pastiche, nor does Simpson expect the listener to search for immediate parallels by closely scrutinizing each bar of the Beethoven whilst listening to his three quartets. The parallels are of a general kind throughout, but are always highly illuminating, not only demonstrating Simpson’s profound love and deep understanding of Beethoven’s masterpieces, but also showing his strong spiritual affinity for the German composer.

Simpson’s Quartet No 4 was completed in 1973, some twenty years after the composition of No 3, and bears a close relationship to the first Beethoven Rasumovsky, Op 59 No 1. It is dedicated to Basil Lam, the great Bach scholar. Like the Beethoven, Simpson’s quartet opens with a sonata-allegro that presents a rising cello melody later answered by the first violin as a crescendo is built. The second subject, more song-like in character, is also on first violin and is based on a simple, ascending C major scale, surrounded by richly polyphonic accompaniment. Considerable conflict alternates with mysterious serenity in the ensuing development, and following a modified return of the opening, the movement closes with a sustained ritardando, elongating the original melody as it ascends to the heights until it is barely recognizable.

Beethoven’s second movement is one of his most unusual scherzi, both in form and manner. Consequently, Simpson preferred to allude to its tonal structure (including its prominent use of repeated notes) rather than imitate its mood and pace. Both movements begin with solo viola playing an isolated rhythm on B flat; Beethoven’s is in moderate tempo and is playful and delicate, whereas Simpson chooses a very fast triple-metre opening with a menacing crescendo! However, something of the fantastic humour of the Beethoven original has been skilfully recaptured, with its rapid, unpredictable changes of texture and activity.

Robert Simpson was eager to avoid the funereal overtones of Beethoven’s adagio, so he decided to compose a slow movement at a slightly quicker tempo, an andante, whose emphasis is more on plaintive lyricism, though there are passionate outbursts of extreme power at climactic moments. A low C on cello leads directly into the finale which, like the first movement, is a large sonata design. Simpson describes the Beethoven finale as ‘Arcadian, airy’; though his variation is more combative, making deliberate play with the rivalry of the two conflicting keys, F and D, which begins to show itself in this work far earlier than in the Rasumovsky. Like Beethoven’s, Simpson’s last movement slows down towards the end to make an expressive point of the gentle tension between F and D, though Simpson’s adagio interlude is more extended and penetrates deeper. This might well be because greater relaxation is needed to offset the more radical tonal contest. This is pursued right to the end of the explosive coda; the key of D nearly gains the upper hand, but is aggressively dismissed by F at the very last bar.