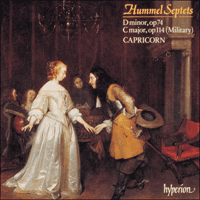 ‘As so often with Hyperion, the engineering is quite simply beyond reproach. A wonderful disc!’ (CDReview)

Johann Nepomuk Hummel showed evidence of an extraordinary musical talent from a very early age and, on being taken to Vienna in the 1780s, was lucky enough to be ‘discovered’ by Mozart, who consequently offered to give him free lessons. Hummel subsequently spent most of the late 1780s and early 1790s on tour as a pianist/composer prodigy, creating a sensation wherever he went. In 1793, still aged only fifteen, he returned to Vienna, to have advanced lessons in composition with Albrechtsberger and Salieri, and tuition on the organ from no less a figure than Joseph Haydn.

After years of study and teaching, Hummel secured his first major post in 1804, when he succeeded Haydn as Kapellmeister at Eisenstadt. It was here that he gained the necessary composing experience which he desperately needed to establish himself seriously as a creative artist, so that after his dismissal in 1811 for negligence of duties, he became increasingly familiar as a notable composer of piano, chamber and dramatic works.

Hummel rapidly became one of the most popular figures on the Viennese musical scene, and, delighted with a highly successful tour of Germany, briefly accepted a post at Stuttgart (1816–18), after which he moved to Weimar in 1819. Throughout the next decade he was at the very height of his powers, pouring out new music in vast quantities, including the famous Piano Method of 1828, whilst constantly going on tour.

Nevertheless, his employers were becoming increasingly vexed by Hummel’s frequent absence, until finally, in 1829, his annual leave was cancelled, and despite further touring, it was becoming obvious to all who heard him that Hummel’s powers were very much on the decline. In London, he suffered the humiliation of being totally upstaged by Paganini, and even Vienna had lost interest by the time of his death in 1837.

It seems remarkable now to learn that Hummel was genuinely considered by many of his contemporaries to be the equal of Beethoven as a composer. Nevertheless, he was very much a child of the eighteenth century, and it is no small coincidence that the rise of the musical Romantic movement in Europe was contemporaneous with Hummel’s equally spectacular fall from favour.

He was proficient in all the major classical forms except the symphony, but despite the relative popularity of his Trumpet Concerto, it is his chamber music which, in retrospect, contains his finest work as a composer, especially those pieces involving the use of the piano. Of these, the two Piano Septets recorded here are particularly fine examples, the D minor Septet considered by many to be Hummel’s masterpiece.

Piano Septet No 1 in D minor, Op 74 (1816), was composed at a time when the piano virtuoso was in the ascent, leading to the appearance of such thoroughly delightful, though equally vacuous works as Eber’s Piano Quartet of 1809 and Field’s Divertissement (1810) which are characterized by highly demonstrative keyboard-writing. Hummel certainly pulls no punches in this respect, but there is also a noticeable care for internal balance and sharing of musical material, surpassed only by Beethoven at this time.

The piece was a runaway success, and played no small part in establishing Hummel as a household name. John Ella (1802–1888), music critic and founder of the Musical Union concerts, described the piece as ‘preserving its stability and duration throughout Europe for more than a century – not suspended on the thread of slender fashion and caprice, but bound to the human heart by every tie of sympathetic approbation’. The Opus 74 Septet is scored for piano, flute, oboe, horn, viola, cello, and double bass. Hummel also later arranged it for the more manageable forces of piano, violin, viola, cello, and double bass.

The exuberant, but highly dramatic Allegro con spirito is dominated by the keyboard part, which consists almost entirely of a seemingly unstoppable flow of semiquavers and triplet quavers. The other instruments are allowed to have a say in the proceedings occasionally, but are inevitably overshadowed by the quick-fire piano acrobatics. One brief passage, shortly before the end of the exposition, sounds strangely premonitory of the opening of Schumann’s E flat Piano Quintet.

The Menuetto (a scherzo in all but name) is in more playful mood, with the piano reduced to an accompanimental role until the delightful D major central ‘alternativo’ section, with its characteristic dancing grace note figurations.

The F major Andante con variazioni opens with a gentle theme announced by the piano, followed by four contrasting variations characterized as follows: (i) semiquaver transformation of the theme in the piano, whilst the original appears variously in the other instrumental parts; (ii) the theme is transferred to the left hand of the piano, with demisemiquaver accompaniment in the right, whilst the flute and oboe play their own versions; (iii) moves to the tonic minor with flute and oboe, followed by cello and double bass having a turn at the theme, after which the solo piano leads into (iv), still in F minor, with constant demisemiquavers, and the rest of the ensemble gradually joining in to give a euphoniously triumphant statement of the main theme.

The Vivace sonata-rondo finale returns to the urgent mood of the opening movement, the first statement of the main theme being immediately followed by the unaccompanied viola’s introduction of a dramatic fugal idea, joined quickly by the oboe, double bass and cello in turn. A welcome release from all this tension is afforded by a more relaxed A major episode, after which the rondo theme returns with renewed vigour and energy, driving the movement relentlessly on to its forceful conclusion.

Some of Hummel’s finest chamber music was composed during the 1820s, including the Grand Trio Concertant, Op 83, in E (1820), the Grand Quintetto, Op 87, in E flat (1821) and the Piano Trios, both in E flat, Opp 93 and 96 (c1822). The so-called ‘Military’ Septet, dating from October 1829, is perhaps a less profound work, but that is very much in the nature of the genre. Military first movements were all the rage in Vienna at the turn of the nineteenth century, the most celebrated example prior to Hummel’s Septet being Woffl’s Grand Concert Militaire.

As befits a piece of this description, the trumpet is called upon in the fast movements to colour the music militaristically, its only real justification for this debut in the chamber music of the Classical period. Its use here can hardly be said to have caught on in a big way, but Hummel’s piece undoubtedly inspired Saint-Saëns to use the instrument in his Septet, Opus 65.

The ‘Military’ Septet is scored for piano, flute, clarinet, trumpet, violin, cello and double bass, with a quintet arrangement along the same lines as the Op 74. Such was Hummel’s enormous popularity at this time that the work was published virtually simultaneously in London, Paris and Vienna in 1830.

The ebullient Allegro con brio first movement immediately establishes the greater sense of equality between the various instrumental lines. After a piano-dominated opening, all the treble instruments have a go – trumpet, violin, then clarinet – and it is the clarinet which eventually introduces the wistful G major second subject.

The serenely drawn lines of the Adagio naturally dispense with the services of the trumpet, but the dramatic Beethovenian Menuetto (another scherzo), features the inevitable clarion calls in its gentle middle section, humorously recalled at the very end.

The various musical elements which combine to make up the Vivace finale, place the piece firmly in its historical context. For whilst there is an undeniable whiff of early Beethoven apparent in the melodic writing (and the throwaway fugato passage near the beginning), the fizzing arpeggiac figurations in the piano part clearly point the way forward to Mendelssohn. At the end, the music dies away enchantingly, in total contradiction to one’s natural expectations.