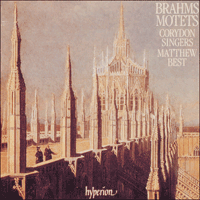 Of all late nineteenth-century composers, Brahms was without peer as a contrapuntalist, and nowhere is his total mastery and understanding better demonstrated than in the unaccompanied motets. Such is the structural density and technical sophistication of much of this music that Brahms once rather worriedly enquired of his friend and mentor, Joseph Joachim: ‘Quite apart from the ingenuity, is it good music?’

At the heart of Brahms’s contrapuntal thinking lay the canon, whereby voices overlap with the same material which may, for example, move simultaneously at different speeds, appear in inverted form, or even be overlaid with a second, independent canon. To this day, the resulting austerity has tended to militate against the widespread popularity of the motets, even amongst the composer’s most fervent admirers. Yet, if one appreciates this music less in the light of, say, the ‘German Requiem’ or ‘Nanie’, and more in the context of its real musical ancestry—the sixteenth-century polyphonic masters of the Netherlands, the Venetian antiphonalists, and in particular Johann Sebastian Bach—these miniature masterpieces reveal their own unique world of rarefied expression.

The Two Motets Op 29 are the earliest surviving works by Brahms in this particular genre. Composed in 1860, they were not published until 1864, shortly after their premiere in Vienna on 17 April, as part of a concert which also included a performance of the two-piano version of the F minor Piano Quintet, Op 34, given by Brahms and Carl Tausig.

‘Es ist das Heil uns kommen her’ is richly scored in five parts (divided basses), consisting of a chorale harmonization (cf Op 74 No 2), followed by an extended Allegro fugal setting based on the main chorale melody. Brahms alleviates the relatively conventional approach to harmony by the subtle use of a number of archetypal chromatic inflections, most potently in the final bars, intensified by their suspension over a tonic E pedal point in the bass.

‘Schaffe in mir, Gott’, also with divided basses, opens with a canon (Andante moderato) in augmentation; that is to say, whilst the sopranos sing their melody twice through, the basses simultaneously sing the identical melody but at half speed, the two parts finally meeting up at the end of the section. However, such is the resulting simplicity of musical utterance, that the casual listener would hardly be aware of this intellectual conceit. ‘Verwirf mich nicht’ (Andante espressivo) is texturally more complex, exhibiting a transcendental contrapuntal mastery. Particularly notable is the exhilarating effect caused by the canonic interplay between the sopranos and tenors just before the end of this section, sending both parts soaring up to a top A flat within a beat of each other. The following ‘Tröste mich’ (Andante) is another canon, this time overlapping horizontally at the distance of one bar, and vertically by the interval of a seventh, appearing initially between tenors and second basses. This leads directly into the final section (‘und der freudige’—Allegro) which, with its thrilling sequences of running thirds, ends the motet in a mood of resounding affirmation.

Geistliches Lied Op 30 was composed in 1856, so that despite the misleading opus number it in fact predates both the ‘Ave Maria’ and the setting of Psalm 13. Published in 1864, the first performance was given in St James’s Church, Chemnitz, on 2 July 1865. Once again, the textures of this setting are predominantly canonic, with overlapping entries arriving at both the second above and the ninth below. It is the austerity of style which links this piece firmly with the motets, yet the overall mood can be seen as in some ways preparatory for the ‘German Requiem’. The final ‘Amen’, with its glorious, aching suspensions, comes as a poignant emotional release after the comparative reserve of the setting as a whole.

The Three Sacred Choruses Op 37 were not published until 1865, although the first two date from 1859 (having received their first performance in Hamburg in September of that year), and the third from 1863. They represent perhaps the most austere example of Brahms’s contrapuntal mastery in this genre, all three settings being in strict canonic form.

The brief F major setting of ‘O bone Jesu’ consists of a pair of simultaneous canons in contrary motion between Soprano I/Alto II and Alto I/Soprano II. In addition to the Moderato espressivo heading, the closing bars are further marked espress[ivo] by Brahms, an instruction used comparatively rarely by this most restrained of late Romantic composers, and an illustration of his obvious concern that the sheer technical ingenuity of this music should not inhibit freedom of musical interpretation. ‘Adoramus te, Christe’ is a four-part canon, with answers at the fourth, fifth, and octave below. A harmonic sleight of hand just before the final cadences deftly moves the music up a step away from an implied finish in G, to the home key of A. The structural background to ‘Regina caeli laetare’ is a canon in inversion, although the contrapuntal textures are enlivened throughout by a series of antiphonal ‘Alleluias’, clearly reflecting the influence of Giovanni Gabrieli.

Composed in 1859, the year after the ‘Ave Maria’, the setting of Psalm 13 Op 27 was first performed in St Peter’s Church, Hamburg, on 19 September 1859, with Brahms himself directing. It was not published until 1864, along with a five-part string arrangement alternative to the organ accompaniment used in this recording. The setting maintains a remarkable emotional detachment until the words ‘Ich hoffe aber darauf’, where the music at last moves into a radiantly affirmative G major with an unmistakable infusion of expressive warmth.

The Three Motets Op 110 were composed by 1889 and published the following year, the first performance being on 13 March 1890 in Cologne. They represent Brahms’s final works in this form, and maintain the vein of pessimism which is so typical of Brahms’s motets as a whole. Throughout ‘Ich aber bin elend’, Brahms’s high regard for the choral recitativo style and antiphonal textures of Gabrieli and Schütz is everywhere apparent, particularly the passage beginning ‘Herr, Herr Gott’. The intensification of expression at the words ‘Herr Gott, deine Hilfe’ arrives as an overwhelming plea for assistance. ‘Ach, arme Welt’ is in strophic form (three verses) and finds Brahms once again in cerebral mood. Like a finely tuned watch mechanism, one cannot but admire its workings, but the human dimension appears strangely muted. In ‘Wenn wir in höchsten Nöten sein’, Brahms builds the greater part of the motet from the opening phrase. For the first verse he presents a chorale-style melody antiphonally, and from this creates a variation for the third verse. Verses two and four, however, are scored homophonically.

The Two Motets Op 74 were published in 1878 with a dedication to the great Bach scholar, Philipp Spitta. This is no doubt an acknowledgement of the fact that the great German master’s influence is at its most potent in these particular pieces.

‘Warum ist das Licht gegeben?’ was composed during the idyllic summer of 1877 at Pörtschach, at a time when the composer was putting the finishing touches to his Second Symphony. The first performance was given in Vienna on 8 December 1878. After a severe and imposing four-part opening section in D minor (‘Slowly and with expression’), there follows a canonic setting of ‘Lasset uns’ in six parts (divided sopranos and basses), its warm, F major glow perfectly reflecting the underlying message of the words. The following section (‘Siehe, wir’) is in two halves, the second beginning at the words ‘Die Geduld Hiob’, which developes into a repeat of the music for ‘Lasset uns’. The motet is concluded by a four-part chorale setting to the words ‘Mit Fried und Freud’.

‘O Heiland, reiss die Himmel auf’, in four parts, was composed rather earlier, between 1863 and 1864, the format and mode of expression relating it to the first of the Op 29 motets with which it is roughly contemporary. It is in strict chorale variation form, the five sections being clearly marked by Brahms as ‘Versus I’ etc. in the score. After the opening chorale setting, ‘O Gott ein Tau’ (Versus II) places the chorale melody in the soprano line whilst the supporting parts sing a three-part canon based on a rhythmically diminished version of the same theme. ‘O Erd schlag aus’ introduces a rhythmic variant in the form of a triplet, whilst ‘Versus IV’ (‘Hie leiden wir’—Adagio) is a canon by inversion, whereby the overlapping part has the same melody, but with all the intervals turned upside down. ‘Da wollen’ continues this trend with a double canon (i.e. two canons sounded simultaneously) in inversion, the altos/tenors and sopranos/basses being paired. The final ‘Amen’ demonstrates the ‘stretto’ effect, whereby the various overlapping entries appear ever closer to one another, creating a superb final peroration.

Composed in 1858, but not published until 1861, the first performance of the Ave Maria Op 12 was given at the Gradener Akademie in Hamburg on 2 December 1859, with orchestral accompaniment (the optional organ version is used here), along with the Funeral Hymn Op 13, both directed by Brahms. It represents the composer’s first published attempt at combining vocal and instrumental music, and although there are certain infelicities, the obvious warmth of expression contrasts markedly with the main body of the motets as a whole.

The score of Fest- und Gedenksprüche Op 109 (Festival and Commemoration Sentences) is inscribed: ‘Seiner Magnifizenz dem Herrn Bürgermeister Dr. Carl Petersen in Hamburg verehrungsvoll zugeeignet’, on the occasion of Brahms being at last made a Freeman of the City of Hamburg. Composed between 1888 and 1889, they received their first performance in Hamburg on 9 September 1889, and were published the following year. Despite their specific intention, Brahms regarded these memorial verses rather as general pieces for national days of commemoration, and perhaps this is why they are stylistically less cerebral than the mainstream motets, which these pieces are in all but name. The stylistic impetus was the late sixteenth-century Venetian school, rather than the intricacies of Bachian textural density and contrapuntal conceit.

The opening of ‘Unsere Väter hofften auf dich’ (F major, 3/4) immediately establishes the antiphonal nature of all three settings, the basic musical material being announced each time by the second choir and then embellished by the first, overlapping at the distance of one bar. The concluding section (‘Der Herr wird seinem Volk’) moves into quadruple time, opening with the male voices of both choirs, and developing into a culminatory passage of free, eight-part counterpoint. ‘Wenn ein starker Gewappneter’ is structurally the simplest of the three, being cast in a clearly identifiable ABA form, whereby the Handelian opening music returns once more at the end. The C minor middle section is highly dramatic, including a biting setting of ‘ein Haus fället’. The Venetian style is at its most potent in ‘Wo ist ein so herrlich Volk’, with its imposing antiphonal terracing. The closing bars show Brahms’s inspiration running at white heat, being a poignant reminder of the opening music in the form of a series of moving suspensions held over a low, tonic pedal point.