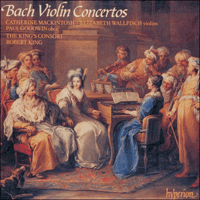 On 5 August 1717 Bach’s appointment as Kapellmeister at the court of Prince Leopold of Cöthen was confirmed. But leaving his post at Weimar proved difficult, for Bach’s employer, Duke Wilhelm of Saxe-Weimar, was not pleased to be losing his court organist to a job that carried more prestige and more money. Indeed, when Bach asked for his release in more forceful terms, he was imprisoned by the Duke from 6 November until his dismissal in disgrace on 2 December.

But the move was, from all aspects, a good one. Bach’s relations with his employer at Weimar had, although good until those last three months, always been somewhat official. But at Anhalt-Cöthen Bach had a young employer, Prince Leopold, who was a talented musician (he played the violin, viola da gamba and harpsichord) and, as Bach said, ‘not only loved but knew music’. The esteem in which Leopold’s new Kapellmeister was held was born out by Bach’s new salary, which made him the second most highly paid member of the royal household, and by the fact that Leopold maintained an orchestra of seventeen players. Bach’s principal duty was not in the court chapel (where only simple music was performed) but to provide music and rehearse the musicians for concerts and special occasions. It is perhaps not surprising that under such conditions much of his orchestral and chamber music appears to date from the six years he remained there.

Although it is harder to date Bach’s instrumental music accurately than his vocal music, as fewer autograph manuscripts survive, the six Brandenburg Concertos certainly date from this period, and it seems likely that six violin concertos (four for one violin, one for two and one for three) and several other concertos, including that for oboe and violin, were written at Cöthen. Of these concertos, many of the original manuscripts are lost, or survive only in later transcriptions, arrangements and revisions. Like Handel, Bach often re-used and arranged old compositions, and, when he took over the Leipzig Collegium Musicum in April 1729, many of these older concertos resurfaced, mostly as harpsichord concertos. From these we are able to reconstruct those original concertos which do not survive in their early forms.

The two principal violinists in Prince Leopold’s orchestra, Joseph Speiss and Martin Friedrich Marcus, had both been recruited from Berlin. The Concerto in D minor for two violins (BWV1043) was presumably written with these two talented players in mind. The first movement introduces fugal writing into a concerto form: the opening fugal ritornello (a recurring passage, varied in length and by transposition into other keys) is repeated three times during the course of the movement, with the later repetitions shortened, and in between these central pillars come brilliant episodes for the two soloists, treated so equally that both players play each melodic phrase. The Largo ma non tanto, with its beautiful cantabile melodies, has become one of the best known of all Bach’s concerto movements, with the soloists’ theme being treated fugally, and the tutti strings providing harmonic support. The final Allegro is in conventional concerto form, with the soloists leading the ritornelli as well as the episodes. But here, as in so much of Bach’s writing, the accompanying orchestra too has music of excitement: the main theme twice appears in the first violins whilst the soloists present more lyrical material, and the accompaniment also provides a series of short imitative phrases which are thrown rapidly between the various sections of the orchestra during the soloists’ episodes: insistent unison arpeggios in all the upper strings make the two passages of double stopping from both soloists all the more exciting.

Whilst still at Weimar Bach had assimilated the Venetian concerto style by transcribing concertos by Antonio Vivaldi (1678–1741), and all his surviving violin concertos make use of the Vivaldian three-movement form and elements of Vivaldi’s standard ritornello structure. The first movement of the Violin Concerto in A minor (BWV1041) is a typical example of this: the form is based on an alternation of a tutti ritornello with episodes, where the solo instrument predominates and introduces virtuoso new material. The central Andante takes as its basis an ostinato theme, heard throughout the movement in the bass instruments (and at one point taken over by the violas), whilst the remaining strings provide an accompaniment to the soloist’s expressive, winding melody. In the last movement Bach combines fugal writing with ritornello form: the ritornello is in itself a complete fugal exposition which contrasts very effectively with the solo episodes. These range from the lyrical to a passage of ‘bariolage’ in the last episode, where the soloist rapidly alternates between open and stopped strings to produce broken chords. In this case the use throughout the passage of an open E string, sounding much brighter than the other stopped strings, and itself the dominant of A minor, makes for an exciting build-up into the final complete ritornello. For this last movement, a return to Bach’s manuscript produced a different bowing to the usual slurred-in-threes: this considerably lightens the texture, and has been included in this performance.

The first movement of the Violin Concerto in E major (BWV1042) is in a clear ternary form. The opening rising major triad provides the basis for Bach’s exceptionally rich thematic workings of this material in both the outer major sections, and the more lyrical minor centre section, which closes with a mini-cadenza for the soloist. Checking the soloist’s line against the original Hering manuscript produced an interesting melodic variant in the two bars before the cadenza: the ‘new’ version has been included in this performance. The middle section has some particularly fine writing for the violas—another example of Bach never ignoring the parts which lesser composers might treat simply as an accompaniment to the soloist. As with the A minor concerto, the Adagio second movement (in the relative minor) is based on an ostinato bass line, over which the solo violin unfolds its gently ornamented melody. The final dance-like movement is a relative rarity amongst Bach’s works, a rondo. Between five repetitions of this sixteen-bar dancing theme, come four episodes in which the soloist shines, each episode increasing in speed and brilliance.

With the Concerto in C minor for oboe and violin we have a work for which no original source exists. However, knowing that Bach wrote such a piece, and with a later concerto for two harpsichords (dating from around 1735–40) appearing on all the evidence to be a re-working of the missing work, it is possible to reconstruct with a fair degree of certainty the ‘lost’ concerto. All but one of the harpsichord concertos appear to be re-workings of earlier concertos, and from those which survive in both versions it is possible to gain a fairly accurate idea of how Bach set about re-working his earlier concertos. The C minor concerto for two harpsichords (BWV1060) is interesting in that the two solo instruments do not use identical melodic ranges: one compass fits that of the oboe exactly, and the differing melodic characteristics of the two solo parts again suggest an uneven pair of solo instruments. The splendidly characterful first movement is interesting for the ways in which the opening theme is transformed before it returns to its original form at the end. The slow movement, similar in many ways to that of the double violin concerto, and just as much a gem, has a cantabile theme which is treated imitatively by the two soloists, with a simple chordal accompaniment from the main body of strings. This accompaniment is often played pizzicato in the version for two harpsichords, but, with no original manuscript to which to turn, and taking into account the greater sustaining power of the violin and oboe, together with the central sustained chordal writing (which would have to be played ‘arco’ in any case), light bowing appears to be the most successful solution. The lively third movement takes a Bourrée-like theme for its ritornello, and the intervening solo episodes are based almost exclusively on that dancing theme.