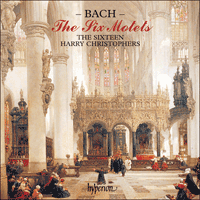 Bach’s six motets are among the greatest achievements of choral polyphony in the baroque period. This early recording by The Sixteen and Harry Christophers is a jewel in Hyperion’s catalogue, containing performances of utter joy, rendered in sonic splendour.

‘Splendid. A wonderful achievement, one that only renews our admiration for Bach. It has been six, maybe twelve months since I heard a record that impressed me as much as this one. Don't pass it by’ (American Record Guide)

When Bach wrote his motets in the 1720s he was heir to a tradition that was about five hundred years old. The word ‘motet’, derived from the French mot, was coined in the thirteenth century to describe the pieces that resulted when words, usually secular in character, were added to the melismatic upper parts of passages of organum—the earliest type of polyphonic Western music. It was not until the sixteenth century that the motet became the central genre of church music, and was developed in classic form. By then the plainsong cantus firmus, the foundation of the medieval motet, had largely given way to the technique of imitation: each phrase of the text was set to, and illustrated by, its own passage of counterpoint, beginning with a series of entries which might or might not be derived from plainsong. The points of counterpoint, as they were called, were normally unrelated to one another, so the structure was determined by the text, not the music. The genre was also defined to some extent by the fact that it was essentially music for unaccompanied choir—though the voice parts of Renaissance motets were frequently doubled or taken over by instruments.

To understand the history of the Baroque motet we need to understand how the word was used at the time. In one sense it was used for any piece of church music that fulfilled the former liturgical function of the motet—as the major musical item in the Proper of the Mass (the texts that changed according to the day), or its equivalent in the Protestant liturgies. Thus Bach referred to his ‘Gott ist mein König’ as a ‘motetto’, even though we would call it a cantata (it is No 71) and his contemporaries would have thought of it as a ‘concerto’—that is, a concerted piece for voices and instruments. The vocal concerto was, of course, originally merely a type of motet that used solo voices, obbligato instruments and continuo instead of a polyphonic choir. But by Bach’s time the word ‘motet’ was normally associated with works that preserved some or all of the features of the stile antico. They were often performed with continuo and with instrumental doubling, but they did not normally have obbligato instrumental parts. They frequently preserved the polychoral idiom of the late sixteenth century. And, most important, they were still written mainly as a succession of unrelated points of counterpoint, though Bach and his contemporaries often introduced more modern structural elements, such as fugal technique or the ritornello plan.

In Bach’s time at St Thomas’s Church in Leipzig, Latin motets were required each Sunday for the beginning of morning service and for Vespers, but Bach was content to use works from the seventeenth-century repertory; he evidently preferred to concentrate his energy on the central musical items of the Lutheran morning service, the vocal concerto or cantata. Ernst Ludwig Gerber reportedly heard a fine double-choir Latin motet by Bach sung at the Christmas service at St Thomas’s in 1767, but only German motets by him survive today, and most if not all of them were written for special occasions outside the regular liturgy.

Modern scholarship recognizes the six motets on this recording as the only authentic Bach motets (apart from the chorale setting ‘O Jesu Christ, mein Lebens Licht’, which has obbligato instrumental parts), though there are several doubtful works, and a good case has recently been made that the famous eight-part setting of ‘Ich lasse dich nicht’, long attributed to Johann Christoph Bach (1642–1703), is actually an early work by Johann Sebastian. The earliest of the six is probably the five-part setting of Jesu, meine Freude, written, it has been suggested, for the funeral service of the wife of the Leipzig postmaster, Johanna Maria Kees, on 18 July 1723. It is also by far the longest and the most complex in its layout. It uses the popular chorale by the poet Johann Franck and the composer Johann Crüger, first published in 1653, but with free passages, added between the six verses, setting words from Romans 8, verses 1, 2, 9, 10 and 11. The result is an ingenious symmetrical structure, typical of the mature Bach. The eleven movements are of three types: settings of the choral tune and text (Nos 1, 3, 7, 11), free settings of the chorale text (Nos 5 and 9), and settings of the added text (Nos 2, 4, 6, 8 and 10). They are grouped around the fugue No 6; Nos 1 and 11 use the same music; Nos 2 and 10 have material in common; and Nos 3–5, a chorale, a trio and a free aria-like movement, have their counterparts in Nos 7–9.

Next in seniority, it seems, comes the eight-part Fürchte dich nicht, which has been assigned to the funeral service of the wife of another Leipzig official, Stadthauptmann Winkler, on 4 February 1726. The work is in two movements. The first, a setting of Isaiah 41, verse 10, uses a modernized version of the late sixteenth-century polychoral style, with the two choirs answering and combining largely in block chords. Exactly half way through the work the text changes to Isaiah 43, verse 1, set to a three-part chromatic fugue sung by the combined lower voices of the two choirs, which then supports two verses of Paul Gerhardt’s hymn ‘Warum sollt ich mich denn grämen’, given out as a cantus firmus by the combined sopranos. Of the six Bach motets, this is the one most closely related in style to the motets of the earlier members of his family; indeed, it has exactly the same formal scheme as the eight-part setting of ‘Fürchtet euch nicht’ by Johann Michael Bach (1648–94), a work that Bach would have known from a copy in the archive of his family’s compositions, which he helped to assemble.

The eight-part Komm, Jesu, komm! is also steeped in seventeenth-century tradition. The text, a paraphrase of John 14, verse 6 (‘I am the way, the truth and the life: no man cometh unto the Father but by me’) was written by the Leipzig poet Paul Thymich, and was originally set by Johann Schelle, a predecessor of Bach at St Thomas’s, for the funeral of Rector Jakob Thomasius on 14 September 1684; the occasion for which Bach set the text is not known. Schelle’s work, a simple aria, was later published, and it was probably from this source that Bach took the text, though the settings are unrelated. Bach uses the first and last verses of Thymich’s poem; the first is set in the traditional polychoral motet style, with several changes of time and pace; the second is headed ‘Aria’ and is a simple four-part setting of a minuet-like melody that seems to be by Bach himself—it is not unlike his best-known chorale, ‘Dir, dir, Jehova, will ich singen’.

The eight-part Der Geist hilft unser Schwachheit auf is the only motet of the six that can be assigned with certainty to a particular occasion: it was written for the funeral of J H Ernesti, Rector of St Thomas’s School, on 24 October 1729. Its structure is not unlike that of ‘Komm, Jesu, komm!’ in that it divides into two movements: the first, subdivided into three contrasted sections marked by changes of time, is a setting of Romans 8, verses 26 and 7, while the second is a simple setting of verse 3 of Luther’s chorale ‘Komm, Heiliger Geist, Herre Gott’. The musical style, however, is much more modern. The first section of the first movement, for instance, is in the polychoral motet style, but uses a lively 3/8 metre and has a main theme that returns in fragments in the manner of a concerto ritornello theme. A set of original doubling instrumental parts, for strings and woodwind, survives for this work, but it is recorded here just with continuo.

The remaining two motets can hardly, from the character of their texts, be funeral works, though nothing is known for sure about the occasions for which they were written. Indeed, doubt has been cast on the authenticity of the four-part Lobet den Herrn, a setting of the short Psalm 117, for the earliest source is a Breitkopf edition of 1821. But it is difficult to see who else could have written such a vigorous, compact yet expansive work, cast in true motet style as a series of contrapuntal points within one long movement, to which is appended a contrasted triple time Alleluia.

There is no doubt about the authenticity of the eight-part Singet dem Herrn ein neues Lied. It dates perhaps from the New Year 1727, and is a setting of words from Psalm 149, verses 1–3 and Psalm 150, verses 2 and 6, separated by a chorale movement based on verse 3 of the chorale ‘Nun lob, mein Seel’ in Choir 2, which is answered in Choir 1 by a free setting of a chorale text related to ‘O Ewigkeit, du Donnerwort’. The three-movement structure of the work suggests that Bach thought of it as a sort of choral concerto, and this is borne out by the mighty first movement, which is laid out in the ritornello plan: statements of the theme in each of the main keys visited are separated by modulating episodes. This was this piece that Mozart heard during his famous visit to St Thomas’s Leipzig in 1789, as reported by Friedrich Rochlitz:

Hardly had the choir sung a few measures when Mozart sat up, startled; a few measures more and he called out: ‘What is this?’ And now his whole soul seemed to be in his ears. When the singing was finished he cried out, full of joy: ‘Now, there is something one can learn from!’

And learn from it Mozart certainly did, as his Requiem shows.