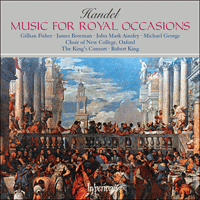 ‘An imaginative programme of infrequently performed music by a great composer is always welcome, and this one should make a wide appeal’ (Gramophone)

One of Handel’s greatest gifts, and one in which he found more success than any of his contemporaries, was his ‘management’ of patronage. Indeed, it could be argued that it is Handel’s career, rather than that of Mozart or Beethoven, that marks the end of the baroque notion of the composer as servant.

Handel’s first royal contact was Prince Ferdinando de’ Medici, son and heir of the Grand Duke of Tuscany, whom he first met in Hamburg, and who invited Handel to visit Italy. Handel’s primary intention seems however to have been to gain experience, especially of Italian opera. By later in 1706 he had reached Rome, where Marquis (later Prince) Francesco Ruspoli employed him as a household musician and where most of Handel’s major Italian works were composed. On his travels around Italy he made a number of useful contacts including Prince Ernst August of Hanover, brother of the Elector (later King George I of England) and the Duke of Manchester, the English Ambassador, both of whom pressed him to visit their countries; he may also have been promised a post at the Hanoverian court. Turning down a post in Innsbruck, Handel moved on to Hanover where he was appointed Kapellmeister to the Elector on condition that he should have an immediate twelve months’ leave of absence to visit England.

During this first visit, lasting eight months, Handel was favourably received at Queen Anne’s court, though his eyes were largely on Vanburgh’s new opera house, the Queen’s Theatre in the Haymarket. Rinaldo, the first Italian opera specially composed for London, was performed there in 1711 and was a sensational success. With politics in London at their most turbulent, and peace talks taking nearly as long as the wars which they were trying to terminate, Handel left London later in 1711, returning to Hanover. There the Elector, as heir to the British throne, would have taken a close interest in the political manoeuvrings of his future state.

Handel seems to have managed to tread a suitably diplomatic path between the two countries, and within three months of his return to England in 1712 he was writing the Te Deum and Jubilate for a Thanksgiving Service for the Treaty of Utrecht—ironically a political settlement totally odious to the German court he had just left. How Handel had his work preferred to that of the native English composers is not known, but if we were to find out we would probably also know how he was chosen to write an English Court Ode.

The monarch’s birthday was traditionally an occasion for court festivities and one of the main tasks of the Master of the Queen’s Musick was to compose a suitably joyful Ode. John Eccles held this post during the early years of the century, and the papers of the Lord Chamberlain’s office record payments to him for several such compositions. There is no record of the first performance of Handel’s Ode Eternal Source of Light Divine but it was obviously intended for the Queen’s birthday on February 6, most probably in 1713. The author of the Ode, praising the Queen’s virtues as peacemaker, was Ambrose Philips who provided an inspired text (a relatively rare event for what were usually thoroughly obsequious poems) likely to bring out the best in Handel. In its nine movements the work contains much variety, from the gentle pastoral duet ‘Kind health descends’ to the splendidly rumbustious bass solo ‘Let envy then conceal her head’ and the lively alto and bass duet ‘Let rolling streams’. Handel later used this movement’s ground bass, characterised by leaping octaves, in his second Concerto ‘a due cori’. The chorus too has a surprising amount of variety in the repeated refrain ‘The day that gave great Anna birth’ and is also given the opportunity for an echo chorus during the final movement. But it was in the opening movement (one that owes much to the influence of Purcell) that Handel produced his most inspired writing: the famous alto Richard Elford and an obviously fine court trumpeter, supported by sustaining string chords, were provided with ravishing music of quite melting beauty.

The Queen normally took little interest in her composers, being (according to the Duke of Manchester) ‘too busy or too careless to listen to her own band, and had no thought of hearing and paying new players however great their genius or vast their skill’. It is maybe surprising, therefore, that she granted Handel a pension of £200 a year for life. But the Queen’s health deteriorated, and by September 1714 Britain had a new monarch. Handel’s previous Hanoverian employer arrived in Britain, and one of the first engagements for the new George I was to attend morning service at the Chapel Royal where ‘a Te Deum was sung, composed by Mr Handel’. This seems to have been the ‘Queen Caroline’ setting, and Handel’s position with the new ruler appears to have been secured.

The ‘Queen Caroline’ Te Deum was performed twice that year, first on September 26, and then again on October 17. It too looks back to Purcell in some of its construction, particularly the ‘Vouchsafe’ which has much in common with Purcell’s own 1694 setting of the same text. (Handel, though rude about many of his contemporaries, revered Purcell: at a performance of Jephtha he countered a remark that a passage reminded one of the listeners of Purcell with ‘If Purcell had lived, he would have composed better music than this’). But Handel’s Te Deum also shows the influence of the opera (in which he was already proving a great success), particularly in the tenor aria ‘The glorious company’, and the lyrical aria for alto and solo flute ‘When thou tookest upon thee’.

Twenty years later, with George II on the throne, Handel was firmly established in the English musical scene with a catalogue of musical successes (and a few operatic disasters) behind him. He still enjoyed royal support and fulfilled occasional commissions, as the anthem Sing unto God demonstrates. Written in 1736 for the wedding in the German Chapel at St James’s Palace of Prince Frederick (the Prince of Wales) and Princess Augusta of Saxe-Coburg on April 27, Handel took his text from Psalms 68, 106 and 128. Once again the libretto gave him ample scope for a variety of moods: the grand opening uses chorus, full orchestra (including timpani) and an alto soloist, with an important part for a solo trumpeter. The soprano soloist is given a movement (‘Blessed are all they that fear the Lord’) underpinned with a typically cheerful walking bass, and the bass soloist and an obbligato cello have a particularly lyrical setting of ‘Thy wife shall be as the fruitful vine’. The Chapel Royal obviously had a particularly fine tenor on call for the service; the soloist is given some demanding passage-work before the chorus (and the return of the trumpets and timpani) end the work with typical Handelian energy and grandeur.