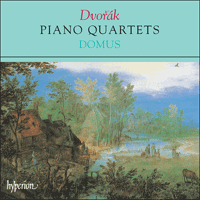 Though his music had slowly been gaining recognition in Prague during the early 1870s, Dvořák’s reputation and financial situation were still uncertain by the beginning of 1875. But in February of that year he was awarded the lucrative and prestigious Austrian State Prize for his third and fourth symphonies. Buoyed by this first sign of wider recognition he produced a stream of vital, strongly characterized works over the next twelve months, including the Serenade for strings, the opera Vanda, the fifth symphony and several chamber compositions. One of these was the Piano Quartet in D major, composed rapidly between 24 May and 10 June, shortly after the Piano Trio in B flat. Yet, like the trio, the piano quartet had to wait some years for its first performance; it was finally played, in a slightly revised version, in the Konvikt Hall, Prague, on 16 December 1880, at a concert supported by the city’s Artistic Circle.

Dvořák’s music of this period is suffused with a highly personal and apparently spontaneous melodic freshness that had emerged only intermittently in his earlier works where Wagner’s influence had at times obscured the Czech composer’s natural lyricism. The wonderfully unfettered melodic invention, markedly Slavonic in flavour, of the fifth symphony and the string Serenade is shared by the Piano Quartet in D major, many of whose themes have the haunting simplicity of folk song. Yet the music also reveals the growing subtlety of Dvořák’s imagination. In the initial Allegro moderato, for example, the relaxed, syncopated opening theme almost immediately dips into B major, a magical key shift characteristic of Schubert; this is not only a beautiful effect in itself but also presages the importance of B major in the movement’s overall tonal scheme. Equally subtle is the way the second theme draws on two separate fragments heard earlier, transforming them into phrases of beguiling lyricism. Characteristically, Dvořák dwells at length on this idea, enhancing it with expressive counter-melodies. In the coda a splendid climax is forged from the grandioso combination of the two main themes.

The Andantino is a set of variations on a grave melody in B minor, the choice of key surely influenced by the prominence of B major in the first movement. The five variations display an imaginative range of textures, from the sparseness of the first, through the gossamer delicacy of the third, in which the theme is inverted, to the full, rich colouring of the fourth, a free lyrical flowering that moves into the distant key of E flat. Dvořák draws an unexpected intensity from his theme in the coda, with its poignant chromatic harmonies and anguished final climax.

Contrary to Dvořák’s usual practice in his chamber works there is no independent scherzo. Instead he ingeniously combines features of both scherzo and finale into a single movement. The scherzo element is represented by the initial waltz theme and a subsequent section in quicker tempo whose biting cross-rhythms evoke the furiant, a Czech dance that features frequently in Dvořák’s later music. These two sections alternate with an allegro agitato in common time whose smooth cantabile lines, distinctly Mendelssohnian in feeling, rather belie Dvořák’s tempo marking. The coda’s transformation of this expansive lyricism into a short-breathed jig has an almost comical incongruity.

By the time Dvořák composed his Piano Quartet in E flat major he was an international celebrity, feted by the German and English musical establishments. The Berlin publisher, Simrock, who had made a fortune out of the first set of Slavonic Dances, had originally asked Dvořák for a new piano quartet in 1885, prompted, perhaps, by the success of Brahms’s work for the same instrumental combination. But it was not until four years later, after completing his opera The Jacobin, that Dvořák finally found the time to embark on the quartet. It was composed during July and August 1889, just before the eighth symphony, and the inspiration seems to have flowed easily: ‘The melodies just surged upon me’, he wrote to his friend Alois Göbl. Like the D major quartet it was premiered at a concert funded by the Prague Artistic Circle, on 23 November 1890.

The Piano Quartet in E flat is a more complex and demanding work than the D major, its design more closely wrought, its scoring more original and inventive. Though the string-writing in the earlier work is masterly (Dvořák was an accomplished violinist and violist), the piano has a tendency to resort to stock figurations. But by 1889 Dvořák was a vastly more experienced composer, and his writing for the keyboard in the E flat quartet is far more assured, with imaginative exploitation of both its percussiveness and its capacity for rich, massive sonorities. A particular feature of the string-writing is the prominence allotted to Dvořák’s own preferred instrument, the viola, especially in the fervent second subjects of the outer movements.

The arresting opening of the Allegro con fuoco immediately elicits a skittish reply from the piano in a foreign key, B flat minor, suggesting from the outset both the movement’s rapid shifts of mood and its wide tonal scope. Dvořák draws an astonishing range of meaning from this opening paragraph, notably in its myriad rhythmic transformations in the development and its spectral appearance on tremolando violin and viola in the coda. The key structure of this Allegro is particularly subtle and cogent: the piano’s initial flirtation with B flat minor, for instance, has a weighty consequence when the recapitulation introduces the opening unison motif powerfully in that key, not in the expected E flat major; and the dissonant B natural which lends that opening motif such a distinctive flavour is the first hint of the importance of B major and minor both in the first movement (as, for example, in the B major recapitulation of the second subject) and in the work as a whole.

For the Lento Dvořák moves into the key of G flat major, where the strings acquire a slightly veiled, dusky sonority. Formally the movement is as simple as the Allegro con fuoco was complex: five distinct melodies, of which the third and last are closely related, unfold at length and are then recapitulated, with altered scoring, in their original order. But expressively the music ranges wide, from the tranquil depth of the opening exchange between cello and piano to the powerfully scored fourth theme, whose passionate turbulence recalls the central section of the Adagio in Schubert’s String Quintet.

In spirit the captivating third movement, with its deliciously airy textures, lies somewhere between a Ländler and a waltz. There is a whiff of gypsy melancholy about the second theme, in G minor, curling dolefully within a narrow compass; and, as Dvořák’s biographer John Clapham has pointed out, the third appearance of the main theme, in the piano’s highest register, evokes the cimbalom, an instrument characteristic of rustic Czech bands. In the central section, with its deft canonic writing, the whispering B major opening contrasts startlingly with the fortissimo continuation in B minor, where cross-rhythms lend added pungency to the music.

There is once more a hint of the gypsy spirit at the start of the finale which, unusually in a major-key work, begins in E flat minor. Dvořák is typically lavish with his themes in the second group, which also includes a telling transformation of the opening theme, sounded dolce by cello and violin in imitation against an expressive viola counterpoint; while the soaring B major theme intoned by the viola in its haunting upper register is one of the composer’s loveliest inspirations. The exciting, tautly argued development concentrates almost exclusively on the opening idea, intensifying in turn its brusqueness and its latent lyricism.