Domus first made its reputation performing in its own portable concert hall, which also gave the group its name—a white geodesic dome seating two hundred. Playing in this magical and intimate setting, Domus's committed yet informal presentation won them an enthusiastic following, and they appeared at venues in remote places throughout the world, from Italian hilltops and German parks to Australian city squares. Through their open rehearsals, discussion groups and workshops, Domus's characteristic performance style evolved through its close relationship with its audiences, and greatly enhanced the accessibility and understanding of the repertoire. However, the group's ever-increasing following eventually outgrew the dome and drew them back into the conventional concert hall and to the recording studio.

Domus's first recording, of the two Fauré Piano Quartets, was made for Hyperion in 1985 and won a Gramophone Award for the best chamber music recording of the year. The disc also won a German Record Critics' Prize and was accorded the rarely bestowed 'Evénement Exceptionel' by the French journal, Télérama. That recording was followed in 1988 by the two Dvorak Piano Quartets, opp 23 and 87, which also received glowing reviews.

By this time the personnel of the group had changed. Cellist Timothy Hugh left to pursue a solo career and was replaced by Richard Lester, and Robin Ireland, who left to join a string quartet, was replaced by Timothy Boulton.

Domus's next few recordings (of Mozart, Brahms and Mendelssohn) were made for the then-new Virgin Classics label, now absorbed into EMI. By 1994, having recorded virtually all of the main Romantic piano quartet repertoire, and each member having established notable solo careers, Domus decided to disband. Before they did so Hyperion asked them to make one last recording. To complement their now famous recording of the Fauré Piano Quartets they brought in Anthony Marwood as second violin to record the two Piano Quintets by the same composer. The recording was issued early in 1995 and that too was the recipient of a Gramophone Award as the best chamber music disc of the year. 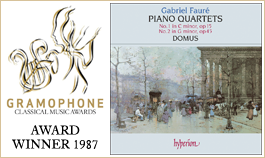 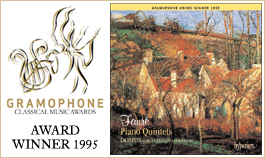