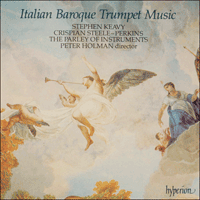 ‘A cornucopia of riches’ (Fanfare, USA)
‘Beautiful, newly-presented music. The achievement is quite breathtaking’ (Hi-Fi News)

Before the end of the eighteenth century the trumpet was normally a simple length of tubing, folded back on itself to form a loop, and pitched either in C or D. The player was essentially limited to the notes of the harmonic series: the higher he ventured, the more notes became available, so leading to the cultivation of the upper clarino register. Until the middle of the seventeenth century trumpeters rarely participated in the mainstream of music. They played improvised fanfares in trumpet and drum bands and were usually thought of more as soldiers or court attendants than as musicians; they can still be observed in this role in Monteverdi’s Orfeo of 1607, though, unusually, their fanfare is written out. When composers first experimented with using trumpets in composed music – around 1620 – they still wrote for trumpet bands in a fanfare style, as some polychoral church works by Michael Praetorius and Heinrich Schütz show. The trumpet only began to be used regularly in concerted instrumental music in the 1660s, though it is difficult to know whether this crucial development occurred first in Italy or Germany. Cazzati published his Op 35 including La Bianchina in 1665, but the Austrian Heinrich Schmelzer had already published sonatas for two trumpets and six-part strings in 1662. Once the sonata or sinfonia for one or two trumpets, strings and continuo was established, however, it quickly became a popular genre in courts and churches on both sides of the Alps, and its characteristics – strong, square, diatonic melodies supported by simple, directional harmony – began to influence other types of music. Modern editions and recordings have tended to favour the works of Torelli, Gabrielli, Perti and other composers working at San Petronio in Bologna. For this recording I have tried to cast the net wider without minimizing the importance of the Bolognese repertory; some of the earliest and most interesting trumpet sonatas were written in other Italian cities such as Rome or Venice, or by Italians in northern Europe.

The earliest music on this record is by Girolamo Fantini, serjeant trumpeter at the Florentine court. All his surviving music is found in his 1638 trumpet tutor, published for some reason in Frankfurt. It looks both forwards and backwards: it has a number of sonatas of the Renaissance type that consist of a single melodic line to which lower parts were improvised, but it also has the earliest known music for trumpet and continuo – a series of short sonatas and dances. When a harpsichord rather than an organ is used, Fantini’s title-page seems to say (though the syntax is obscure) that the trumpet should be muted.

The second-oldest piece – possibly the earliest concerted sonata with strings – is by Vincenzo Albrici. It is undated, but another work by Albrici in the same collection is dated 1654 and he was director of a group of Italian musicians at the Swedish court (the provenance of the Uppsala collection) from 1652 to 1654, so it probably dates from around then. Albrici led a hectic life: he was a Roman (a pupil of Carissimi) whose travels took him to (among other places) Stockholm, Dresden, Rome, Stralsund, Neuburg, London, Paris, Leipzig and Prague. His vigorous sonata appears to be, in part at least, a battle piece.

Next in seniority probably comes the magnificent sonata for trumpet and two string choirs by Alessandro Stradella. This also survives in an undated manuscript, but its polychoral scoring is similar to a number of his Roman works, so it was most likely written before he left his native city for good in 1675. An early date is also suggested by the fact that the string groups are of equal size (unlike the later concerto grosso) and use the layout of violin, two violas and bass, not the more modern two violins, viola and bass; the actual music, however, is extraordinarily modern in its harmonic and melodic language. Stradella’s lurid life (he was murdered following an intrigue with a girl from a prominent Genoese family) has unjustly overshadowed the merits of his music.

The short but eloquent sinfonia by Carlo Pallavacino reminds us that many early concerted instrumental works were originally introductions to vocal music; the sources that preserve them detached from their parent works represent the first stage of a process that was to establish the concerto and the symphony as genres in their own right. Il Diocletiano was the first of Pallavacino’s many Venetian operas, written shortly after a period spent working at the Dresden court as Heinrich Schütz’s assistant.

Nicola Matteis was another Italian who worked in northern Europe: he arrived in London from his native Naples in the 1670s, where he made a fortune as a violinist and guitarist from performing, teaching and selling copies of his compositions. It is not easy to reconstruct the original form of his concerto, for it survives only in a curious arrangement made to fit the format of his violin books. The third trumpet part, for instance, cannot be played on the natural instrument and has been given here to the trombone; I have also reconstructed the lost string parts. The original piece is a rambling suite of seven movements, but the first three (performed here) make a satisfactory short work on their own.

Francesco Mancini’s sinfonia was also known in London, for his opera was produced there under the title Hydaspes in 1710; it seems that the composer – also a Neapolitan – worked in England for a period. The sinfonia is typical of the simple, vigorous orchestral style popularized by Alessandro Scarlatti; the scoring, though, with solo violins as well as solo trumpet in the first movement, is quite sophisticated.

The trumpet sonata by Arcangelo Corelli is virtually the only genuine work that was not included in his six printed collections. It too has English connections: it was published in London in 1704, and in 1713 a performance was advertised as containing ‘several pieces of Musick proper for the Trumpet particularly a Sonata Compos’d by Signor Corelli, on purpose for Mr Twiselton when he was at Rome’. Although Corelli is thought of as a Roman composer he was born in Fusignano near Bologna, and received his early training there; in Bologna, doubtless, he was introduced to the trumpet sonata idiom.

Giovanni Buonaventura Viviani was born in Florence and spent most of his career up to the 1670s at the Innsbruck court. When he published his trumpet sonata in 1678 (one of two in a volume of violin works) he had recently returned to Italy and was engaged in directing opera and oratorio in Venice, Rome and Naples. His trumpet writing is unusual in that it uses the C trumpet (instead of the D instrument that was becoming standard in Italy at the time), and this suggests that he wrote it in Innsbruck. The declamatory nature of some of the movements – a neat mixture of recitative and fanfare – suggests that they were intended for a large church.

Maurizio Cazzati established San Petronio in Bologna as an important centre for performing and printing concerted music, vocal and instrumental. The three trumpet sonatas in Op 35 are scored for trumpet, four-part strings and continuo, using the violin, two viola and bass layout. Cazzati states that they can be performed with the trumpet muted, which raises the pitch of the instrument (and the key of the string parts) to D; we have followed his suggestion since we offer a ‘chamber’ performance one-to-a-part instead of one employing the large forces that were available in San Petronio.

Petronio Franceschini was born in Bologna – as his Christian name indicates – and spent his short working life there as a cellist. His trumpet sonata, one of only two surviving instrumental works, dates from the last year of his life and is one of the finest works in the Bolognese repertory, not least for its rhythmic energy and unusual harmonies – including the repeated use of A minor harmonies in a D major work. The rich scoring, with cello, trombone, ‘contrabasso’, theorbo and organ, is precisely specified in the original set of parts at Bologna.

Giovanni Bononcini was also a cellist who started his career in Bologna, though he was born in Modena. He was evidently something of a prodigy, for in 1685 at the age of fifteen he published three collections of instrumental music, including four sinfonias with trumpets. Although these works are technically and musically advanced – they include some of the most difficult trumpet-writing in the Bologna repertory – they are so different from the works he wrote in London in the 1720s (he was Handel’s chief operatic competitor) that earlier scholars were disinclined to believe that they were the work of the same man. Bononcini’s sinfonia uses the same scoring as the Franceschini sonata, so we felt it appropriate to use the same battery of continuo instruments.