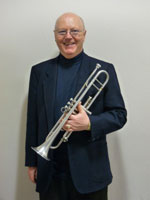 Crispian Steele-Perkins is one of world’s most respected virtuoso trumpeters, well known for concerto and solo appearances all over the globe. His career began as an orchestral musician (in the English National Opera and Royal Philharmonic orchestras). His playing is also heard by millions in films (James Bond, Ghandi, Jaws, Batman and many others) and on television (The Antiques Roadshow, Dr Who). He collects and restores historic trumpets, and playing these he has recorded with The King’s Consort (with whom he is principal trumpet), The Academy of Ancient Music, Collegium Musicum 90, The Taverner Players, Tafelmusik, the English Baroque Soloists and The Parley of Instruments. He has accompanied an extraordinarily wide variety of singers, including Sir Harry Secombe, Sir Cliff Richard, Sir Bob Geldof, Kate Bush, Elaine Paige, Chris Rea and Lulu; in the classical field he has recorded trumpet ‘obbligati’ with Kiri te Kanawa, Lynne Dawson, Sylvia McNair, Emma Kirkby, James Bowman, Bryn Terfel and Olaf Bär. He also gives entertaining lecture-recitals, demonstrating brass instruments of many shapes and sizes, and is much in demand giving masterclasses. His largest live audience was 133,000 when he performed the Haydn trumpet concerto at the Edinburgh Festival.
www.CrispianSteelePerkins.com