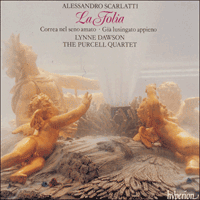 ‘My very favourite … their easy rapport and the stylishness of her singing are quite unforgettable, and Woolley's stunning performance … wants for nothing’ (Gramophone)

In an age when if your father was a butcher it was likely that, if you were a boy, you would become one too or, if a girl, marry one, it is not surprising that there were families of musicians. Of the three famous composers born in 1685, Handel is the odd one out—he became a musician despite opposition from his respectable father, a barber-surgeon. But both Bach and Scarlatti had musical ancestors, brothers and children. ‘Bach’, unqualified, means Johann Sebastian Bach; but the name Scarlatti in isolation is ambiguous. In the context of keyboard music, one assumes Domenico (though, as this recording shows, his father also wrote idiomatically for the harpsichord); but Alessandro’s reputation as a composer of vocal music is paramount.

Little is known about Alessandro’s father, Pietro Scarlata (to give the Sicilian form of the family name). He may not have been a musician; but his wife Eleanora d’Amato (whom he married in Palermo in 1658) was sister of the maestro di cappella of the cathedral there; his Passions according to St Matthew and St John, set in recitative, remained in use there until the late nineteenth century, and may well have been an early influence on Alessandro’s musical style. Two of Pietro’s daughters and the youngest son became singers, and one son, Francesco, became a violinist and composer. Apart from a daughter who died in infancy, Alessandro (1660–1725) was the eldest child. There was no musical training available publicly at Palermo; Alessandro may have studied with relatives. When he was twelve, he was sent with his two sisters to study in Rome. He may have been a pupil of the leading composer there, Carissimi; perhaps he was recommended by Marc’ Antonio Sportonio, a former student of Carissimi, who was Sicily’s leading musician and was known to the Scarlatti family (he had witnessed Pietro and Eleanora’s marriage).

The non-specialist reader could by forgiven for believing that Roman music between Palestrina and Corelli was of little interest, with the exception of Carissimi. But Rome had a rich musical life throughout the seventeenth century. Church music, oratorio and, despite Papal suspicion, opera flourished. Scarlatti’s earliest appointments were ecclesiastical: as maestro di cappella at the churches of San Giacomo degli Incurabili (1678–1682) and then San Gerolamo della Carità. His opera Gli equivoci nel sembiante was performed on 5 February 1679 and his first oratorio later that month. On the libretto of his next opera he is described as maestro di cappella to the exiled Queen Christina of Sweden, one of Rome’s great patrons of the arts. He must have had other sources of income too, since on 12 April 1678 he married, with a first child coming as soon as 5 January 1679. But by the time Domenico was born (26 October 1685), Alessandro had moved to Naples.

Opera had first come to Naples in 1650, with works by Cavalli and Monteverdi imported from Venice; but it was Scarlatti who established its reputation as one of Italy’s leading operatic centres. Between 1683 and 1702 he wrote at least thirty-four operas for it. In fact, in 1705 he claimed to have written eighty-eight works for the stage; this figure must include operas written for elsewhere, serenatas, and operas by other composers which he revised. He remained in touch with activities in Rome, and many of his six hundred chamber cantatas were probably written for Roman patrons such as the cardinals Ottoboni and Pamphili and Prince Ruspoli. The political instability at Naples led Scarlatti to attempt to secure a position at the court of Prince Ferdinando, son of the Grand Duke of Tuscany. But he seems to have been unsuccessful, and for a short while held posts at the Roman church of Santa Maria Maggiore; at that period, there were only private operatic performances in Rome, since the Pope had banned public opera as a gesture of thanks to God for deliverance from the earthquake of 1702. Scarlatti was invited back to Naples in 1708. His last operas were written for Rome in 1719 and 1721. He died in Naples on 22 October 1725 and was buried in the Chapel of St Cecilia in the church of Santa Maria di Montesanto where there is a flattering inscription implying that he restored music to its ancient glory and that all of Italy mourned his death.

Details of any relationship between Scarlatti and Handel are sparse, though they were both linked to the same patrons; Handel’s La Resurrezione, for instance, followed only a few days after Scarlatti’s Passione at Easter 1708, and they must have been planned together. There is a very specific point of contact in the only surviving manuscript of Scarlatti’s cantata Già lusingato appieno, since it was copied by Giuseppe Angelini, who was regularly employed by Ottoboni, Pamphili and Ruspoli and copied many of Handel’s works. The text of this cantata is particularly intriguing: an English hero is about to cross the sea to claim his throne, leaving his beloved queen and son behind. The situation is appropriate for the deposed James II in the 1690s when there were various occasions on which a return to England might (at least from the distant vantage point of Italy) have seemed imminent; Italians had a particular interest in his fate since his second wife (the mother of the Old Pretender) was Mary of Modena. Correa nel seno amato also dates from about this time; like many cantatas, it uses the conventional image of the love-lost shepherd to explore the passions in a more idealized way than would be possible with a real-life situation.

The form of the cantata was changing rapidly during Scarlatti’s lifetime, as the six hundred or so examples from his hand demonstrate. By the time Handel adopted it, the pattern of recitative and da capo aria had become normal. But in these works of the 1690s the recitatives are more melismatic and the arias shorter and less predictable, but generally maintain one mood without contrast. Occasionally, two stanzas are set to the same music: the aria ‘Se v’è mai’ from Già lusingato makes use of this to dramatic effect. Recitatives are accompanied by continuo, except that in both cantatas the violins are added to provide a different level of intensity for their conclusions.

Alessandro Scarlatti’s keyboard music has been overshadowed by that of his son; writers on Scarlatti have passed over the subject and there is no comprehensive and accurate edition. His most substantial work is entitled Toccata per cembalo d’ottava stesa, and dated Napoli 1723. The title may refer to a harpsichord with ‘ottava stesa à tre registri’ (complete bottom octave and three sets of strings) owned by Cardinal Ottoboni. The date may be merely that of copying; but even if that is so, this comes from late in the composer’s life. Most of his instrumental music dates from his last decade. There is an earlier Toccata comprising a Preludio, Adagio and Fuga; there is also an earlier version of La Folia with fewer variations, dated 1715. This recording uses that as a precedent for playing La Folia without the preceeding Toccata, but in the final version. This comprises thirty statements of the theme, coincidentally the same number as Bach’s ‘Goldberg’ Variations, and, like that work, finishes with a repetition of its opening statement.