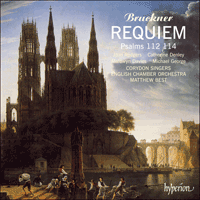 Bruckner’s early Requiem of 1849 and the setting of Psalm 114 (really 116) were composed well before his long period of gruelling technical study with Simon Sechter, during which period he was permitted to compose almost nothing. That was followed by another stretch with Otto Kitzler, less prohibitive so far as creative work was concerned, but still severe; at this time he wrote the Overture in G minor, the ‘study’ symphony in F minor, and a number of choral pieces, including the substantial Psalm 112 (with orchestra) on this record. This period of deliberate creative abstinence has led to the belief that Bruckner was a late starter, that he wrote no music of worth before he was about forty. It is true that his greatest masses and his main development as a symphonist found fulfilment after this hiatus, and it is certainly probable that the enforced self-denial had incalculable psychological effects, on his personality as well as on his work. Nobody will ever be able to assess the mark all this may have left on his nervous system, which caused him much suffering during his life. His work, which represents a lifelong search for inner and outer peace, must have gained as a result; his natural indecisiveness and lack of confidence, though it brought about an obsession with revision (aggravated by the pressures on him by his well-meaning but disastrously mistaken friends), were part of a profound humility that eventually enabled him to achieve great things, free from self-regard.

This simplicity, often taken for simple-mindedness by the sophisticated, can be felt in all the early works on this record, and it is the Requiem especially that proves Bruckner to have been no tyro at the age of twenty-five. It is by no means a perfect masterpiece, but throughout its length it impresses with its naturalness, its complete sincerity, its economy of means, and above all with its quiet individuality. It can be said to be the first full demonstration that the young man was a composer of inestimable promise, not at all the clumsy yokel his personality may at times have suggested. There is evidence here that he must have known and studied many choral works of the distant past, as might be expected from his musical upbringing in the monastery of St Florian, but also evidence of the possibility that he knew something of the earlier symphonies of Haydn, if the opening of the first movement is anything to go by.

In feeling, the expressively reticent opening of the Requiem, with its softly shifting syncopations in the strings, may well remind us of such a beginning as that of Haydn’s Symphony No 26 in D minor (‘Lamentatione’); this style is a tradition that must have been still alive in Bruckner’s time in Linz, but he is already able to make individual use of it, and we can sense in it not merely reflections of the past—it already faintly anticipates one or two of his own symphonic passages in the two earlier D minor symphonies, for instance, Nos ‘0’ and 3. Other rather amusing evidence of archaic practices in Bruckner’s earlier time is his use of the continuo throughout this Requiem; the basses are carefully figured throughout. But whatever we observe, we cannot escape the solemn beauty of this music, which already has the authentic atmosphere of natural genius. Against the subtly floating rhythms of the strings, the choral writing is direct and plain; the effect is gripping enough to make one wonder why the work has been so neglected. In the best parts of it we find Bruckner’s true nature, which dominated all his finest work in the future, and defines his separation from the romantic movement. The orchestra consists only of strings and trombones, a horn replacing one of the trombones in the Benedictus, so an austere sound is maintained throughout the work.

There are boldnesses in the use of tonality; the polyphonic Quam olim Abrahae is put strikingly in the key of F minor; simple textures are used with clear imagination, as in the juxtaposition of naive solos and plain choral responses with sensitively expressive string figuration in the Agnus Dei. This music needs no close analysis, which would defeat its guileless intent, and it does not unfailingly uphold its best levels. But as a whole it is a touching and very personal little work, speaking of things in the composer’s heart, and of greater things to come. Hans-Hubert Schönzeler once suggested that it would go finely together in the same concert with the Ninth Symphony—the beginning and the end of the real Bruckner. Being of moderate difficulty and not needing a large orchestra, it would moreover be ideal material for good amateur choral societies. Its appeal will not fade, and it is time it found a modest but privileged place in the general repertoire.

This is the first recording of Psalm 114 (116) (1852), scored for five-part chorus and trombones. It is certainly also the first performance outside Austria, if indeed it were ever performed there at all, since the only existing material has hitherto been a very unclear manuscript, sometimes incomplete in detail. It has here been very skilfully realized by Matthew Best. The ambiguity in the Psalm numbering is due to the fact that 114 is on Bruckner’s manuscript but the German words correspond to the first nine verses of Psalm 116 in the English Bible. These are preceded by an Alleluia. The music is at first of an impressive archaic austerity, bare in harmony, and strikingly simple in texture. E minor is the opening key, but G major ulti­mately dominates. The most impressive passages are the simplest, and when Bruckner launches into a fugue (‘I will walk before the Lord in the land of the living’) the effect is sometimes more than a little stiff, and the counterpoint is decidedly pre-Sechter! As a whole, however, this small work proves itself a necessary key to the understanding of Bruckner’s development, and finely performed (as it is here) can give considerable pleasure.

Psalm 112 (1863) is an assured post-Sechter product, a trenchant B flat major setting of a song of praise, introduced (as in the previous work) by an Alleluia. This time Bruckner uses a full classical orchestra, and the chorus is double. There is some rich and sonorous writing, and the central fugue (on Alleluia) is a much more fluent affair than the one in Psalm 114 (116). Perhaps the full-scale recapitulation creates some stiffness rather than satisfying symmetry, but the whole thing has an enthusiastic punch and an already mature skill in execution that would make it an enjoyable acquisition for amateur choirs. Bruckner had already written one full-sized mass in 1854 and his next large choral work after this Psalm was to be the powerful Mass in D minor of the following year, the first of the three great Masses—so here we find him gazing, perhaps not fully realizing the fact, down the long road of the rest of his creative life, the Masses looming on the horizon and the Symphonies far beyond that.