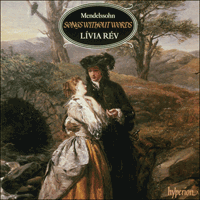 It was the composer’s father, the banker Abraham Mendelssohn who, following his conversion to Christian Protestantism, added ‘Bartholdy’ to his surname. Although Felix continued to use the extended name, publishers and the public subsequently disregarded it, preferring the simpler, original, ‘Mendel’s son’.

As both man and composer, Felix Mendelssohn met with enormous success in Victorian Britain—and even before, since his first four visits took place prior to Victoria’s accession in 1837. The handsome young German had so many attributes that the Victorians admired—personal charm, enormous drive and industry, great organizing ability, and a Jewish background that was acceptable in London where Nathan Rothschild was a leading financier and Benjamin Disraeli was to become Queen Victoria’s Prime Minister. This was in marked contrast to his own country where the young Mendelssohn was once spat upon in the street by a so-called nobleman for being Jewish.

In considering the very real popularity which Mendelssohn’s music enjoyed in Victorian England, it must be remembered that such illustrious contemporaries as Chopin and Schumann were considered too modern and emotionally somewhat unstable. Also Brahms and Wagner were scarcely known at this time. Mendelssohn’s music was, in contrast, well-mannered and likeable within its expressive limits of tender appeal and exhilarating spirit which never descended into tasteless exuberance.

Mendelssohn was received by Queen Victoria and her Consort with considerable warmth. The composer’s letters to his mother reveal how the young Queen, married but two years, was then far from the forbidding figure of later years and sang with her husband to Mendelssohn’s accompaniment on piano and organ in Buckingham Palace. The composer assessed the musical ability of the royal couple very highly, and it was clear that their music-making gave him genuine pleasure.

An interesting detail from Queen Victoria’s Journal of 16 June 1842, reads: ‘After dinner came Mendelssohn-Bartholdy whose acquaintance I was anxious to make. He is short, dark and Jewish looking—delicate with a fine intellectual head. He is very pleasing and modest and played first some of his ‘Lieder ohne Worte’ and then asked us to give him a theme upon which he could improvise. We gave him two, ‘Rule Britannia’ and the Austrian National Anthem … at one moment he played the Anthem with his right hand and ‘Rule Britannia’ as a bass with his left. Poor Mendelssohn was quite exhausted when he had done playing.’

Two years later Mendelssohn was again in London and wrote that he did not go to bed before one-thirty in the morning at any time on this visit, which lasted for two months. He was once again the guest of the Queen with whom he played duets and chatted quite informally. The Queen’s Journal of 30 May 1844 notes that: ‘We went to the Drawing Room to see Mendelssohn and talked to him for some time. He played to us beautifully—music from the ‘Midsummer Night’s Dream’ and two of his ‘Lieder ohne Worte’. He is such an agreeable and clever man and his countenance beams with intelligence and genius.’

Another entry, dated 10 June, interestingly relates that: ‘We played some of the ‘Lieder ohne Worte’ which Mendelssohn has kindly arranged for us as duets, adding an unpublished one …’ It is also known that the Philharmonic Society of London, which had previously been in deficit, was able, through Mendelssohn’s popularity and business administrations, to add £400 to their reserve fund in 1844.

Mendelssohn’s private life seems to have been as well-ordered as was his music. No breath of scandal sullies his memory. Even the intense love he and his sister Fanny shared found no sexual expression; this is not to say that none was suppressed, but Felix and Fanny Mendelssohn were not William and Dorothy Wordsworth and each settled into successful and happy marriages with other partners.

Mendelssohn’s wife, Cécile, was a young lady of such remarkably good looks that Felix wrote to her mother on one occasion to express his determination not to walk with Cécile in the streets of Berlin again: ‘The continuous staring of passers-by is absolutely ridiculous.’ Yet Mendelssohn, though attracted enough to ask for Cécile’s hand, found that his love for her became ardent only after their marriage; at first prudence overcame enchantment. That she adored him was undeniable and she underwent five pregnancies, of which some were dangerous, with complete stoicism. Although Cécile was in no meaningful way musical, she made a good home for her husband and was a popular hostess with the many celebrities who came to see them in Leipzig.

In terms of musical style Mendelssohn is difficult to categorize. He has been called a ‘Romantic Classicist’ (Einstein), a ‘Classically-Minded Romanticist’ (Bücken) and a ‘Neo-Romanticist of the greatest restraint’ (Schering). But it was Nietzsche who realized that Mendelssohn’s disciplined craft led to new heights of formal subtlety and it was this that pointed out his true excellence. It was his concern with formal balance that led to certain mannerisms which, cliché-like, could be used in many types of structure. The habit of repeating short phrases in order to build up longer melodies, as in the opening of ‘The Hebrides’ Overture, can become wearisome, as indeed can the long tonic pedal points which often end even quite short pieces such as the Lieder ohne Worte. But, that said, Mendelssohn proved himself a master of musical proportion long before he was out of his teens; indeed he achieved more in certain ways than had Mozart at a similar age. Unfortunately, unlike Mozart, Mendelssohn never matched in later life the masterpieces he created in his youth.

As to Mendelssohn’s melodic writing which made such a strong appeal during his lifetime, it has been pointed out by Philip Radcliffe (in his most informative study of Mendelssohn in the ‘Master Musicians’ series) that such a gift, flowing so easily and persuasively, can be overrated by the semi-musical but is in danger of being underrated by the hard-bitten professional.

So far as harmony is concerned Mendelssohn does not extend the use of the chromatic palette, or use it with such imaginative freedom as did Chopin. However, many of the Lieder ohne Worte show great sensitivity in terms of harmonic texture which at times transcends the interest of the melodic line itself.

It is clear that however much opinions and tastes fluctuate, Mendelssohn’s art will continue to appeal to the Anglo-Saxon temperament. Our society is not so richly endowed with genius that we can afford to undervalue so patently gifted an artist. Even that prickly anti-Victorian, George Bernard Shaw, had this to say about the Lieder ohne Worte:

At one of Paderewski’s recitals he played four of Mendelssohn’s Songs without words, which have dropped out of the stock repertoire of late, ostensibly because they are too easy for our young lions, but really, I suspect, because they are too difficult. If you want to find out the weak places in a player’s technique, just wait till he has dazzled you with a Chopin polonaise, or a Liszt rhapsody, or Schumann’s Symphonic Studies; and then ask him to play you ten bars of Mozart or Mendelssohn.

A shrewd comment that does justice to a great musician.