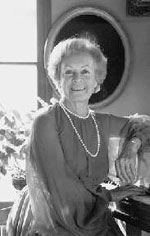 Livia Rév, who was born in Hungary, started her musical education with Margit Varro. It was evident from a very early age that she was exceptionally talented as she won the Grand Prix des Enfants Prodiges when she was nine. She made her debut with orchestra when she was twelve performing the Mozart E flat Concerto for two pianos.

In later years she studied with Leo Weiner and Szekely at the Franz Liszt Academy in Budapest, with Professor Robert Teichmuller at the Leipzig Conservatory, and with Paul Weingarten of the Vienna Conservatory. She also won the Grand Prix de l'Academie Franz Liszt.

Sir Malcolm Sargent first brought her to the notice of the British public after a successful orchestral concert and she became a regular visitor to the United Kingdom, playing more or less everywhere both in recital and with orchestra.

Madame Rév played regularly all over Europe and was the soloist with such conductors as Sir Adrian Boult, André Cluytens, Jascha Horenstein, Eugen Jochum, Josef Krips, Rafael Kubelik, Hans Schmidt-Isserstedt, Konstantin Silvestri and Waltert Susskind. In 1963 she was invited to make her debut in the United States by the Rockefeller Institute. Subsequently she made her New York debut with a recital at the Town Hall which was oustandingly successful.

From her home in Paris, and between travels to Japan, Hong Kong, the Middle East, Africa and elsewhere, Madame Rév taught for many years at the Université Musicale Internationale de Paris, giving annual public masterclasses on interpretation which were always very much appreciated.