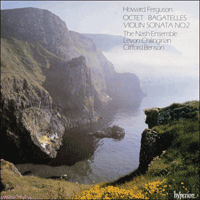 ‘An enterprising record of music we ought to know better. Performances and recordings are first class’ (Gramophone)
‘Excellent, utterly committed playing’ (CDReview)

Although consistently high in quality, Howard Ferguson's compositions are comparatively few in number. When once asked why he had written so little his answer was to quote Shelley: 'Rarely, rarely, comest thou, Spirit of Delight!'. That this 'Spirit of Delight' descended on all three works on this record will be self-evident; together they form a representative group of his chamber and piano works. Each displays the characteristics of Ferguson's personal voice which, once established at the outset of his career, changed little. His style may be described as 20th-century romantic, with his works showing an adherence to classical structures, both formally and harmonically. In general, the thematic material is derived from small groups of notes, and within movements ideas are closely knit. Frequently a theme heard at the beginning of a work acts as a motto that returns to give a cyclic quality to the whole.

Of the three pieces on this record, the Octet op 4 (1933) is the earliest and was the work which firmly put Ferguson's name in the public eye. It began life as a clarinet quintet, then was enlarged to a septet, at which point his teacher R O Morris suggested 'why don't you add a second violin part and have done with it.' So the Octet (which is dedicated to Morris) was finally scored for clarinet, bassoon, horn, string quartet and double bass. The first performance was arranged through the help of Arthur Bliss; its success gained Ferguson a reputation and a publisher; since then the work has remained a standard part of the repertoire for ensembles like the Melos and Nash.

The first movement (Moderato) is relaxed, almost pastoral in feeling. Its main theme is heard at the beginning on the clarinet; in both melodic outline and rhythm the phrase of the first bar provides a principal thematic strand, not just for the Moderato, but within the Octet as a whole in which guise it acts as a motto. The contrasting theme is introduced by the horn. A serene coda ends the movement: over quietly strummed pizzicato chords on the cello, the viola, followed by clarinet in imitation, plays an extended melody derived from the second subject: the violins take up the theme in an interweaving of luminous counterpoint.

A Scherzo in the form of a rondo follows (Allegro scherzoso); its reel-like character is one of the few instances where Ferguson's music betrays his Irish ancestry. Overall the mood is playful with episodes interleaved for horn and a puckish duet for clarinet and bassoon. Viola and cello commence the slow movement (Andante) with a cantabile melody, reticent and wistful. In the more animated central section (Più mosso) the clarinet's theme, over tremolo strings, is clearly derived from the motto of the first movement. The music becomes more agitated, builds to a climax, then subsides to allow the cello to re-establish the opening mood. This extends into the coda where the themes of the 'Più mosso' are transformed to a calm tranquillity.

The peace is broken when the finale (Allegro feroce) sweeps in with a forceful idea which is more of a rhythmic figure than a melodic one. It surges along until replaced by a lugubrious melody introduced by viola and cello con colore, played against a syncopated rocking accompaniment from the winds. In the middle of the movement is a long section where, against an omnipresent pedal point between bassoon and horn, the main ideas are developed. Throughout the finale, allusions to the motto become more distinct until towards the end there is an overt recall of the Moderato's principal themes. The coda concludes the process by bringing the work full circle with the triumphant apotheosis of the Octet's original idea.

If an off-the-cuff remark settled the scoring of the Octet, then the nature of the Five Bagatelles, Op 9 (1944), were due even more to an extempore comment, this time by Ferguson himself. They arose in this curious way: the pressures of war had made composing impossible for him, but when the work load eased he found himself faced with a problem of creative inertia. Almost jokingly he said to a friend, the South African composer Arnold Van Wyk, that if 'someone would give me some notes' he might get started. Van Wyk took him at his word and obligingly scribbled down six notes; from them what is now the second Bagatelle sprang. Four more sets of notes (which number from three to six) were requested and accordingly given; from them the other Bagatelles were fashioned. Widely contrasted in mood, the Bagatelles are akin to Brahms's character sketches, and the deft use of the given notes demonstrates again Ferguson's dexterity at developing and integrating extended movements from a single thematic idea. They are intended to be played without a break, apart from a short pause between the third and fourth. In the last Bagatelle Ferguson recalls the theme of No 2, as if as a gesture of thanks to his friend who was also the dedicatee. The Five Bagatelles were first performed by Myra Hess at one of the wartime series of concerts at the National Gallery.

The Violin Sonata No 2, op 10 (1946), was a product of the end of the war years and premiered by Yfrah Neaman and the composer in Holland in 1947. Again it is a work characterized by balanced formal proportions and closely wrought musical argument: references occur in the second and third movements to the Andante that prefaces the first movement, and the significance of the interval of a semitone should be noted (it is heard, for instance, at the beginning of each movement and in the violinist's concluding notes at the end of the sonata). The introduction, having led the music to the tonic key of F sharp minor, merges into a sonata-form 'Poco allegro' whose main wistful theme is contrasted by more agitated ideas. In the development the pace of the movement slackens as the violin meditates on the principal theme.

A desolate dialogue between violin and piano commences the ternary-form Adagio whose impassioned central section brings reference to both the introduction and the 'Poco allegro's' first theme. The music winds down to melancholy as the violin melody is accompanied by piano writing suggesting the clangour of tolling bells. A free rondo (Allegro vivo) forms the finale. Its opening idea, a short rhythmic snatch, is reminiscent of Bartók, a composer whom Ferguson greatly admires. Towards the end the momentum is interrupted with a recall of the introduction before the verve of the rondo is re-established for the coda.

Howard Ferguson and Gerald Finzi were close friends from the time they met in 1928 until Finzi's early death 28 years later. Finzi frequently encountered difficulty over technical matters in his compositions and Ferguson's advice was often sought. After Finzi died it was his friend who did so much to prepare various works for posthumous publication — the final song groups setting Hardy, for example, and the orchestration of the orchestral tone poem The Fall of the Leaf. So, to celebrate their friendship, this record concludes with an appropriate envoi, Finzi's sole work for violin and piano, the Elegy, first performed by Frederick Grinke in 1954, but only published — under Ferguson's editorship — in 1982. The Elegy was composed over a number of years, reaching completion in 1940 when it was laid aside with a view to other movements being added to form a violin sonata. The project never materialized, however, and Finzi decided that the piece could stand by itself under its present title. In its serene melody, and untroubled harmony, it bears kinship with those other slow movements of Finzi, for instance the second and last movements respectively of the Cello Concerto and Dies Natalis in the rare expression of spiritual radiance created here.

(The composer)
Howard Ferguson was born in 1908 in Belfast. As a 13-year-old he was heard playing at the Belfast Musical Competitions by Harold Samuel, who persuaded his parents to let the boy come to London to study with him. Later, on entering the Royal College of Music, he worked at composition with R O Morris and conducting with Malcolm Sargent while continuing to study the piano privately with Samuel. On leaving the RCM, he divided his time between composition and playing chamber music. During World War II he was associated with Myra Hess in organizing the daily chamber concerts at The National Gallery in London and in those years formed long-lasting duo partnerships with Denis Matthews and Yfrah Neaman. From 1948 to 1963 he taught composition at the Royal Academy of Music, where his pupils included Richard Rodney Bennett, Susan Bradshaw and Cornelius Cardew.

By the early 1960s Ferguson felt that he had said all he had to say as a composer and made the courageous decision to stop writing. Since then he has devoted himself to musicology, producing, for instance, scholarly editions of early keyboard music and the complete piano works of Schubert. The early Octet (1933) is the largest of his chamber works, which also include two violin sonatas, No 1, Op 2 (1931) and No 2, Op 10 (1946), and the Four Short Pieces for clarinet and piano, Op 6 (1932-6). To the solo piano repertoire he has contributed a Piano Sonata in F minor, Op 8 (1938-40), a work of tragic grandeur and arguably his most personal statement, and the Five Bagatelles, Op 9 (1944). For orchestra he has written the Partita, Op 5 (1935-6), which was also published in a version for two pianos, the Concerto for piano and strings, Op 12 (1950-51), and two BBC commissions, Four Diversions on Ulster Airs, Op 7 (1939-41), and Overture for an Occasion, Op 16 (1952-3). There are four sets of songs: the earliest, the Two Ballads, Op 1 (1928-32) is scored for baritone with orchestra whilst the remainder are for voice and piano: Three Medieval Carols, Op 3 (1932-3), Five Irish Folksongs, Op 17 (1956) and the song cycle Discovery, Op 13 (1951) which sets poems by Denton Welch. Two large-scale choral works complete Ferguson's compositions; both set medieval words and were given their first performances at Three Choirs Festivals: Amore longueo, Op 18 (1955-6) and The Dream of the Rood, Op 19 (1958-9). The distinguished interpreters of Ferguson's music have included Jascha Heifetz, Myra Hess and Kathleen Ferrier, who recorded, respectively, the First Violin Sonata, the Piano Sonata and Discovery.