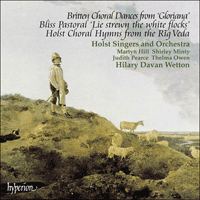 Benjamin Britten - Choral Dances from Gloriana
Britten’s Choral Dances appear in Act 2, Scene 1 of his coronation opera Gloriana, set in Norwich, and form part of a masque in honour of Queen Elizabeth I.

There is little point in dwelling on the opprobrium afforded the composer following the work’s premiere. It took place in 1953 before an audience whose lack of appreciation for what was presented to them was later put into perspective by the acclamation of opera-lovers attending subsequent performances. Not for the first (or last) time, a major work of art had been misunderstood, its subtleties and dimensions unrealised.

Britten’s views on the role of the composer as a practitioner are well known: he felt, as did Stravinsky, that the craft of composition was important in the sense that a truly creative artist should be able to write ‘to order’. This is reflected above all, perhaps, in the wonderful inventions which occur in his music for the young, for instance the ‘slung mugs’ called for in the score of Noye’s Fludde. But Britten also proved his point in the many arrangements he made of his music for various occasions. The Choral Dances are a case in point, as is the orchestral suite from Gloriana. Not only were the Choral Dances extracted from the opera as a cappella choral pieces for the general repertoire, but also, as here recorded, for a special and most apposite occasion, the opening of the Queen Elizabeth Hall on London’s South Bank, an event graced by the presence of another Elizabeth, Her Majesty the Queen.

In this version for tenor, harp and chorus, the tenor part features the ‘Spirit of the Masque’ whilst the harp part re-introduces the instrumental aspects heard in the opera. It thus lies midway between the unaccompanied Choral Dances and their presentation within Gloriana.

The Dances are short and without pretension, yet each is a miniature masterpiece, the diatonic chording of ‘Concord’ revealing once again that ability of the truly great composer to capture the essence of what has to be said with the simplest of means.

Gustav Holst - Choral Hymns from the Rig Veda
An Englishman of distant Swedish extraction, Gustav Holst was born in Cheltenham in 1874 and thus came from those western counties that were the birthplace of several eminent composers around the turn of the century. Holst was something of a late developer in music; his final, and successful, attempt to win a scholarship to the Royal College of Music was one of many. Like Bliss, he studied there under Stanford. On leaving college Holst took up a career as a professional trombonist, an experience which greatly enhanced his technique when writing for orchestra. In 1903 he entered the teaching profession which he was to grace to the end of his life.

The major part of HoIst’s output is concerned with vocal music. Even his most famous work, The Planets, draws to its awe-inspiring conclusion with a wordless chorus of extraordinary aural imagination. When setting words, Holst was meticulous in his attempts to devise the most subtle rhythms to express them, a fact which leads to considerable problems even for accomplished choirs to overcome. The Hindu vedas are the oldest body of sacred texts in the world. They are divided into four groups of which the Rig Veda is one, consisting for the most part of simple hymns, ritual chants and invocations to fire, water, the sun and other manifested aspects of the One, Brahman, the deity of the Hindu religion. Typically, HoIst studied Sanskrit in order to read the Rig Veda hymns in the original, believing that any attempt at normal translation would meet with failure. He studied the hymns to the point of such identification that he was able to put the original texts aside and reproduce their meaning in his own words. HoIst’s only known statement on his metaphysical beliefs is illuminating, particularly with regard to the Rig Veda hymns: ‘I believe most thoroughly in comradeship in all shapes as being the ideal of this world. And, as regards the future, I am Hindu enough to believe that comradeship becomes transmuted into Unity, only this is a matter which lies beyond words.’

Arthur Bliss - Pastoral ‘Lie strewn the white flocks’
Master of the Queen’s Musick from 1953, Arthur Bliss was knighted in 1930 and was Musical Director of the BBC from 1942 to 1944. He died in 1975. Following his graduation from Cambridge University he continued his musical studies at The Royal College of Music under Stanford. Bliss never lost touch with the established forms of English music despite his known sympathy with the French avant garde in the period following the first world war.

By 1920, three of his works—Madam Noy, a Rhapsody which included two voices vocalising on ‘Ah’, and Rout for soprano and ten instruments (all of which are recorded with other works by The Nash Ensemble on Hyperion CDA66137)—had won for Bliss a considerable reputation as a composer of remarkable originality. In 1923 he went to live at Santa Barbara in California for a period of some two years, where he produced a string quartet and a song-cycle as well as some piano pieces. On his return to Britain his Introduction and Allegro, dedicated to and first performed by Stokowski, was given at the Promenade Concerts. Bliss’s work soon began to reflect a greater concentration on formal construction and this is evident even in such successful works for the theatre as his ballets Checkmate and Miracle in the Gorbals. In A Colour Symphony, written in 1922 and revised ten years later, Bliss interestingly used the colours of purple, red, blue and green as headings for the work’s four movements.

Bliss’s Pastoral ‘Lie strewn the white flocks’ is an exquisite example of his art. Written in 1928, it was dedicated to Edward Elgar who gracefully acknowledged the compliment in a letter to Bliss wherein he touchingly referred to the inadequate broadcast by which means he first came to hear the work … ‘the transmission or reception (I know nothing of the workings of the BBC with aerial sprites) was not good. But I could judge that your work is on a large and fine scale, and I liked it exceedingly’.

Preceded by an instrumental section. the Pastoral opens with a suitably sturdy summons to the shepherds to celebrate their spring holiday in honour of Pan. The drums then signal the beginning of the hymn to the god. This concludes with calls on Pan to appear, at which the god’s flute is heard. A stately saraband is danced in his honour and the chorus recounts the story of Pan and Echo, the latter sending back a distortion of his appeals.

At sunrise the water-nymphs invite the shepherds to rest. Bliss compared this beautiful poem by Robert Nichols, titled ‘The Naiads’ Music’, to a painting by Poussin. It is for women’s voices and is followed by ‘The Pigeon Song’ to the same poet’s words, set for solo mezzo-soprano. A young girl whispers of her love to her tame pigeon and then sends it with her message to her lover in the fields. Verses from Theocritus, for men’s voices, form the next section in a vigorous prayer to Demeter to bless the fruit and grain.

As the light fades the singers recall the classical love stories of Venus and Adonis, Leda and Jupiter, Diana and Endymion, and they ask each other why they too should not follow the example of the gods.