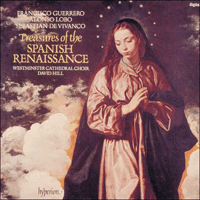 Treasures of the Spanish Renaissance

Francisco Guerrero was the most influential and respected composer in Spain in the time of Philip II. Born in Seville in 1528, he died there in 1599. After an appointment as maestro at Jaén (he was only seventeen), he returned to Seville, first as a singer, then for many years as assistant to the long-lived but ailing Pedro Fernández, and finally from 1574 to 1599 as maestro de capilla of this greatest and wealthiest of Spanish cathedrals. If Toledo held the power, it was Seville that surpassed all in riches and in the splendour of its services, its choir and instrumentalists.

Guerrero published motets, Masses, Psalms and canticles for Vespers, music for the Office of the Dead, two Passions and a fine collection of vernacular Spanish religious villancicos in prints issued in Seville, Louvain, Paris, Rome and Venice. His publications span the years 1555 to 1597.

A fine musician, gifted with a beautiful contralto (high tenor) voice, he played the organ, vihuela, harp and cornett. He was taught briefly by Morales, who had been taught by Peñalosa, an emulator of Josquin. Guerrero certainly met the young Vivanco, who nearly became his assistant, and he knew well Alonso Lobo, who did.

Guerrero met Victoria when they were both in Rome in 1581, and Victoria paid tribute to the older man by including two of Guerrero’s motets in his own book of 1585. The links go on: Victoria and Vivanco could only have been a class or two apart as schoolboys in Avila. Alonso Lobo, an Andalusian like Guerrero, was maestro at Toledo when Victoria was established at Madrid. It was Victoria who acted as agent for Lobo in the printing Lobo’s 1602 Book of Masses. This chain of composers represents just a few of the hundreds, as yet barely known to us, that form a tradition not simply in the Siglo de Oro in music of great quality, but one that stretches right through to the end of the seventeenth century. Then, and only then, did Spanish music decline into a province of Italian style.

The motets of Guerrero chosen for this recording are quite varied in manner and in their distribution of voices. Surge propera (1570), lively and full of invention, makes the Church interpretation of the Song of Songs very clear indeed. The second treble part is a cantus firmus obstinatus repeated five times, descending one degree of the scale at each appearance in the first half of the work. Then this repeated phrase rises by degrees, again five times, in the second half. ‘Veni sponsa Christi’ is the text of this ostinato; ‘Come, bride of Christ’ leaves no doubt that Guerrero had no thought that the Song of Songs was just Hebrew love poetry. The other five voices teem with energetic counterpoint while this second treble seems to cut through like an exposed structural girder. Morales, Guerrero’s distinguished precursor, was a great exponent of this technique.

Quite different, and more modern in flavour altogether, is the thoroughly harmonic, declamatory and clearly antiphonal double choir motet O altitudo divitiarum (1597). This makes use of a high choir (SSAT) and a low one (SATB), a division of singers that became almost standard in Spain for a century. In this work we use organ, harp and bass dulcian, very much in keeping with Sevillian practice at the end of the sixteenth century.

Yet another contrast is the plangent O Domine Jesu Christe (1570) for Palm Sunday, a work of simple but heartfelt sadness, anticipating all the sufferings of Christ’s Passion. The undivided four-part choir allows Guerrero full freedom to exploit his gift for expansive melody.

O sacrum convivium (1570) is for six-part choir with a low emphasis (SAATBB). This is a richly woven tapestry of sound depicting the sacred banquet of Communion. The whole post-Reformation Catholic devotion to this sacrament seems embodied in this rapt and sustained inspiration.

Many of Guerrero’s works were published more than once in his lifetime. Many were copied out in cathedral choirbooks for centuries after the original prints had fallen apart from use. His works were more widely known in Spain and its Empire, in Mexico, Lima and Bogotá, than those of any other composer. Above all, Ave virgo sanctissima was his greatest ‘hit’. Guerrero published it in 1566, in 1570 and again in 1597. Masses derived from it were published by Géry de Ghersem (1598; an amazing seven-voiced work, full of canons), Pedro Ruimonte (1604), Juan Esquivel (1608) and Juan del Vado (circa 1670; Mss. at Madrid and Avila). Ave virgo has a most beautiful text honouring the Blessed Virgin and comparing her to the pearl, the lily and the rose, very much in the manner of the biblical Song of Songs. There are five voices of which the two treble parts form a canon at the unison. Sweet and delicate phrases echo through these parts in some of the most evocative melodies ever written. One stunning episode occurs before the half-way point, when ‘Salve’ is set to successive entries of the four-note plainsong intonation of ‘Salve regina’, but with a raised semitone that transforms the climax into real drama. This most famous of Guerrero’s works subsides, gradually more calm, gently, to a quiet close.

Guerrero’s final contribution to this collection is his bright and triumphant Regina caeli laetare (1584); not startlingly antiphonal, it nevertheless is for eight voices distributed as two equal choirs. The ringing ‘Alleluia’ endings of each section show how vigorous Guerrero could be. It gives the lie to the impression that used to be passed on by music histories that would have Guerrero over-sweet, lacking the strength of Morales and Victoria.

Alonso Lobo was born in 1555 in Osuna, a town about fifty miles from Seville. After rising to a canonry in the collegiate church at Osuna, he was appointed in 1591 as aide, and no doubt probable successor, to the then elderly Francisco Guerrero in Seville. His reputation by this time must have been considerable, since the Sevillian Chapter offered him his position without the usual formal tests of musicianship. He remained at Seville from September 1591 until the same month in 1593, when he was elected to the post of maestro de capilla at Toledo Cathedral, in succession to Ginés de Boluda. Later, in 1604, Lobo returned to Seville when he became chapel master at the Cathedral, remaining there until his death in April 1617.

His most important surviving works are six Masses (one a parody on Palestrina’s Pentecost motet O rex gloriae), and seven devotional motets published in Madrid in 1602 under the composer’s supervision. Apart from their presence in such major centres as the Sistine Chapel in Rome, and Coimbra in Portugal, copies of this publication found their way to the New World, no fewer than five of them still being extant in Mexico today. These and other works of Lobo were in use in Spain, Portugal and Mexico for more than two centuries after his death: his Lamentations were re-copied in a Seville choirbook in 1772: and his Credo Romano was obligatory at Seville on Sundays, on the Feast of Corpus Christi, and some other days, according to the Cathedral Chapter rules of 1648.

All the motets in the 1602 publication are now published in modern performing editions by Mapa Mundi. The quality of these seven motets is consistently high and individual. The emphasis is upon expression and beauty of sound in an atmosphere of intense but non dramatic religious devotion. The voices are written occasionally with some angularity but always for some expressive purpose. The Roman smoothness and perfection of line that we find in Palestrina and even in Victoria is not characteristic. The style is provincial in the proper sense; just as the style of Byrd, Weelkes, and Gibbons was peculiarly English, so the motets of Lobo and his contemporaries, Esquivel and Vivanco, are beginning to be recognized as peculiarly Spanish.

Versa est in luctum must have been written in 1598 for the funeral or memorial rites celebrated on the death of Philip II. In the 1602 print, this work is headed ‘Ad Exsequias Philip II Cathol. Regis Hisp’. It should be recognized as one of the masterworks of the late Renaissance. It has a calm power, tremendous pathos and awesome dignity. In typical Lobo fashion the treble parts follow each other down in imitation whilst the divided tenors follow each other up; mirror-fashion, the parts weave and cross in fine counterpoint, but always to express the mood and meaning of the text.

Despite the overall feeling of religious devotion and sheer richness of sound, the typically Spanish use of canonic imitation was frequently exploited to great effect by Alonso Lobo. In his Ave Maria for 8 voices the strict canon is 8 ex 4 in which the two choirs and the canonic intervals (in time and pitch) are handled so skilfully that there is no monotony of choral antiphony, but an ever changing vocal scoring of great beauty.

O quam suavis est, Domine is a glowing and warm expression of the words honouring the sweet sacrament of Communion. The six voices weave a rich harmonic texture but they each retain considerable individuality. Notice especially at the end how Lobo makes voice after voice climb gently through the others. The Ave Maria has similar moments, finely judged.

Sebastián de Vivanco was born in Avila, probably in January 1551. He may have had the same boyhood schooling and early musical training as his fellow townsman Victoria, though a few years junior. Vivanco served as choirmaster at the cathedrals of Lérida, Segovia, Avila and, from 1602, Salamanca. In addition to his cathedral duties, Vivanco became professor of music at Salamanca University in 1603. He retired from both positions in January 1621 and he died in October 1622. With Alonso Lobo and Juan Esquivel, Vivanco represents the last generation of the Renaissance style composers in Spain, the slightly younger contemporaries of Victoria.

Most of Vivanco’s work comes to us in three printed collections: eighteen Magnificats (1607), ten Masses (1608), and a book of motets (1610). An almost complete copy of the latter has recently been discovered at Salamanca (previously the badly defective Toledo copy had been thought unique).

From the first of these publications (Salamanca, 1607), the final Magnificat octavi toni is now part of the Westminster Cathedral Choir repertory. In this recording the Solemn Tone plainsong is used and the eight-part polyphony is accompanied by organ, bass dulcian and harp. The latter instrument has recently been made in the manner of the late Renaissance double-strung harp that would have been familiar to Monteverdi. From around 1580 Spanish cathedrals increasingly used the harp in addition to organ and dulcian as the standard choir continuo, especially in the festal works written for multi-voiced choirs.

Vivanco’s lively and sumptuous setting is clear in its major tonality and contrasts with the plangent beauty of the motets by his contemporary Lobo. Both these men have worthy places beside Victoria, all of them the inheritors of Morales and Guerrero.