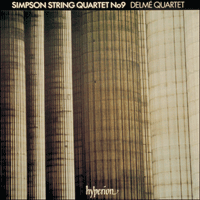 ‘I cannot recommend this issue too highly’ (Gramophone)
‘A marvellous work of our time’ (The Daily Telegraph)
‘A ceaseless torrent, or stream, of pure invention; and if you ask me how that can be – a torrent which 32 times reverses direction and then flows backwards – I can only reply that this is one of the many mysteries of our mysterious musical world, and that it is so’ (The Sunday Times)
‘An amazing achievement’ (Fanfare, USA)
‘The Delmé Quartet … have the utmost cause for self-congratulation on this virtually faultless committal of their titanic progeny to disc’ (Tempo)
‘One of the most extraordinary quartets ever written. No less superb is the playing of the Delmé Quartet whose remarkable dedication and musical skill is faultless’ (Morning Star)

The Delmé Quartet's twentieth anniversary in 1982 coincided with the 250th anniversary of the birth of Haydn, and to mark this dual occasion the Quartet asked five British composers to write works for them. Among these was Robert Simpson (b1921); he chose to mark both occasions by dedicating his Ninth String Quartet 'In affection and admiration' to the players, and by making the work a very large set of variations on a Haydn theme. Its first performance was given in the Wigmore Hall in London on 6 October, 1982.

This work is a remarkable tour de force. Simpson's admiration for the players led him to write a quartet lasting some 57 minutes, its performance requiring not only immense technical virtuosity but also great stamina and interpretative power. Moreover, he has explored thoroughly every facet of Haydn's theme in a way which for fertile imagination, invention, and contrapuntal skill challenges comparison with the variations J S Bach wrote for Goldberg to play to the insomniac Count Kayserling.

But these are not the only reasons why 'tour de force' is an apt description. The theme (the Minuet from Haydn's Symphony No 47 in G, also used in the Piano Sonata in A, Hoboken 26, Landon 21) is a palindrome — that is, the second half is the first played backwards. Never a shirker, Simpson made each of his variations also a palindrome. By his comment 'It's not that difficult: all you've got to do is write out the first half, then copy it out backwards!' he made light of his own ability and the struggles of composition. (Anyone taking such a remark at face value might try the experiment of turning Haydn's fine 'Emperor's Hymn' into something resembling an inferior Victorian hymn tune merely by playing it backwards.) Palindromes are found regularly enough in atonal music, but tonal ones present special problems. Simpson had written variations on this same Haydn palindrome before, for the piano in 1948, and the first three in this much more exploratory quartet work are taken from the early piano set, making a kind of bridge between two different worlds. Palindromes have also been used by this composer in his Quartet No 1 and Symphony No 2, so the Ninth Quartet only searches more deeply a phenomenon that has always fascinated him.

The various kinds of variation to be found in this quartet are not all of the classical kind, which tends to concentrate exclusively on more or less direct melodic, rhythmic, and harmonic parallels. Some of Simpson's amount to deliberate distortions. XXIII and XXIV are musical Siamese twins, overlapping each other and sharing internal organs, at the same time being completely canonic. (Here one might say that whereas Haydn held a mirror vertically at the end of the first half of his Minuet, Simpson places an additional mirror horizontally through the music, producing a weird re-assortment of the parts in XXIV.) Another canonic pair is formed by XXVI (viola solo) and XXVII (duet between second violin and high cello), lyrical variations on the theme starting in the middle instead of the beginning, but still going round in a palindromic circle. The work as a whole aims at being a compendium of both 'normal' and unusual variational techniques as seen by this composer — but it also embraces a very wide range of human expression.

Simpson has been consistently interested in the on-going energy of sonata or symphonic music. Palindromic variations or fugue might seem to deny such an involvement. He can, however, still create this sense of movement on a large scale by yoking variations together and by means of an overall tonal scheme. The theme is in G, and the first fourteen variations are in that key. Variations XV - XIX descend in tonality by tones — F, E flat, D flat, B, A, and this brings back G for Nos. XX - XXII. From XXIII onwards the pitch rises by tones from the semitone above G — A flat, B flat, C, D, E, F sharp. G is retained with Variation XXIX. By this means all twelve tonalities are traversed.

The Fugue makes an enormous finale, rising quietly and harmoniously out of Variation XXXII. Slowly the tension is raised until the strenuous energy we associate with the Grosse Fuge is attained. As the Fugue progresses, its subject develops into ever newer forms; the final versions are quite unlike the opening statement, yet the listener — by following the gradual evolution — can easily hear the connections. It will help to focus on the first shape in Haydn's tune (G, F sharp, D) and its inversion; these are ubiquitous.

Simpson's opening subject uses the rising version, but the second voice inverts it, so substituting a straightforward major key for a modal colour and thereby enlarging the harmonic perspectives of the music. Towards the end of the Fugue the two types of harmonic colour are presented simultaneously as mirror images, yet neither triumphs over the other since the images hold each other in balance. The music is eventually called home by the first violin's insistence on the open G string — acting like the vortex of a whirlpool, irresistibly drawing all the other instruments from the musical maelstrom into itself.

Such is the richness of the invention in this Quartet that it would be impossible to do it justice in words; each listener will constantly find new delights, and new illuminations of Haydn's exquisite Minuet. Simpson's imagination has produced a work which is by turns evocatively lyrical, explosively powerful, serenely meditative, and blazingly energetic; a work which offers us stillness of mind and body as well as the teeming activity of the world.