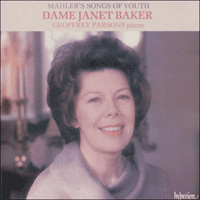 It is typical of Gustav Mahler’s paradoxical nature that during his years of maturity as a composer he worked exclusively in two dissimilar genres, exploring the intimacy and formal compactness of the lied and the public expansiveness of the symphony. It is also characteristic that in Mahler’s output these two genres were mutually influential and that eventually they fused in a work of commanding inventiveness, subtlety and power: Das Lied von der Erde (1907–8).

This recording encompasses the first half of Mahler’s career as a song-writer, and contains (with the exception of two unfinished early songs and those that have been lost) all of his songs composed up to 1890. Already during this period, many of Mahler’s songs were related to other, larger-scale works, producing a web of cross-references and allusions.

As a student in Vienna during the late 1870s Mahler was already composing songs, but no complete example from this period survives. From 1878 until the early 1880s Mahler worked on two major projects: the cantata Das klagende Lied (published in a revised form in 1899) and the never-to-be finished opera Rübezahl, of which only the libretto survives. In the summer of 1879 the young composer fell in love with Josephine Poisl, the daughter of the postmaster at his home town, Iglau. This first love turned Mahler’s thoughts towards a more intimate musical form and in February 1880 he began work on a collection of five songs, settings of his own texts, dedicated to Josephine. During the spring the romance petered out and Mahler completed only three of the songs, Im Lenz, Winterlied and Maitanz im Grünen.

Im Lenz is built up out of the alternation of two contrasting musical ideas, a fast, vigorous setting of the first and third stanzas, and a slower, more mysterious passage for the daydreamer’s answers in the second and fourth stanzas. The first section alludes to material from Das klagende Lied but the second goes further and quotes directly from the cantata. Winterlied begins in relaxed mood with a gently lilting accompaniment that eventually incorporates trills and semiquaver decoration to suggest the spinning wheel, but the song culminates in the despairing outburst of the last three lines. There follows an extended coda for the piano which draws on Waldmärchen (the first part of Das klagende Lied) for its consolatory closing bars.

These two songs are quite different in style to the third: they both aspire to the sophistication of lieder, while Maitanz im Grünen is a Gesang, a simpler song in a style influenced by popular and folk music. Maitanz was eventually published, slightly altered, as the third of the Lieder und Gesänge under the title Hans und Grete. Here it is followed by Winterlied and Im Lenz, the two other songs completed in 1880. For all its apparent simplicity, Hans und Grete is an important work in Mahler’s oeuvre. He used some of its text (and presumably its music) in Rübezahl. But the song is most significant because it is the earliest manifestation of Mahler’s fascination for the Ländler (a type of rustic waltz), which is portrayed in the song with robust simplicity. The idiom and some of the music from this song were re-used in the scherzo of Mahler’s Symphony No 1, and in his later works the dance was subjected to increasingly imaginative transformation.

Having previously supported himself chiefly by teaching, Mahler entered (as he called it) ‘the hell of theatrical life’ during the summer of 1880 when he obtained a temporary appointment as conductor (and odd-job man) at a tiny summer theatre at Bad Hall. Four years later he had made considerable progress up the ladder of success – he was a conductor at the theatre in Kassel – and was in love again. And for a second time love generated the creative momentum that resulted in the composition of songs, in this case Mahler’s first large-scale masterpiece, the song-cycle Lieder eines fahrenden Gesellen.

The cycle looks backwards and forwards. At the end a passage from Waldmärchen is quoted for poetic reasons: on both occasions the music accompanies the passage into sleep of a character who will never wake. However, Mahler recognized that some of the music of the cycle had the potential for symphonic expansion, and material from the second and fourth songs appears in the first and third movements of the Symphony No 1, completed four years later.

The Gesellen songs began life in December 1884 as a group of six poems addressed to Johanna Richter, an opera-singer at Kassel, but its subsequent history is far from simple and accounts for the significance of Colin Matthews’s new edition, recorded here for the first time. Mahler set four of the poems in the mid-1880s but the earliest score to survive is a neat copy of a version for voice and piano dating from around 1891. The cycle was orchestrated and extensively revised during the 1890s. The first performance, conducted by Mahler, was given in 1896, and the orchestral score and a new version for voice and piano were published the following year. However, through some oversight these two publications differ in significant details; the version with piano accompaniment represents an intermediate stage in the work’s evolution, somewhere between the 1891 copy and the composer’s final thoughts embodied in the published full score. Colin Matthews has therefore prepared a new edition for voice and piano which corresponds to Mahler’s orchestral version.

Mahler’s verses are not great poetry. The vocabulary is conventional and the image of a grief-stricken wanderer striving for forgetfulness was a Romantic commonplace. The first poem even borrows heavily from two folk texts included in Des Knaben Wunderhorn. But Mahler’s music transcends the texts’ limitations, and possesses both originality and universality. The work is the first of Mahler’s large-scale compositions to project a spiritual journey in music which is constantly evolving, developing and moving onwards. The poet may achieve peace in death beneath the linden tree, but the music is as much concerned with mirroring the eternal regeneration of Nature.

The Lieder und Gesänge, published in 1892, are not a song-cycle, but simply collect together songs composed over a period of ten years. (The designation ‘aus der Jugendzeit’ was added by the publisher after Mahler’s death.) Hans und Grete is the third of the Poisl songs of 1880 and Frühlingsmorgen and Erinnerung were probably written shortly after its completion. Frühlingsmorgen uses a melodic phrase from Waldmärchen – the common poetic idea is again that of sleep – while Erinnerung is the first of Mahler’s songs about artistic creation.

By 1887 Mahler was a conductor at the Leipzig Stadttheater, and it is likely that the two Molina settings were composed for the Leipzig premiere of Molina’s Don Juan in October 1887. Both songs are brief and uncomplicated, Serenade having the subtitle ‘with the accompaniment of wind instruments’ and Phantasie a footnote recommending the use of a harp for the accompaniment.

In 1806 Achim von Arnim and Clemens Brentano published the first volume of a collection of folk poetry entitled Des Knaben Wunderhorn. Some of the poems included were accurate transcriptions of folk texts, while others were original poems by the editors. The majority, though, fell between these two extremes; based on popular sources they presented a highly romanticized vision of folk poetry. Exactly when Mahler became acquainted with the collection is uncertain. His own early texts are all written in a pseudo-folk idiom, and Wenn mein Schatz Hochzeit macht is obviously based on a poem included in the Wunderhorn. Mahler’s own comments are contradictory, but the songs in Books II and III of the Lieder und Gesänge are his first acknowledged Wunderhorn settings.

Mahler met Weber’s grandson in 1887. Captain von Weber owned his grandfather’s sketches for a comic opera entitled Die drei Pintos and, impressed by the young conductor’s enthusiasm for Weber’s music, asked Mahler to complete the work. Mahler’s version of the opera had some success on German stages, but the project also brought Mahler into contact with the Captain’s family. The result was an affair with von Weber’s wife, Marion, and the composition of some Wunderhorn songs for his children. Between 1887 and 1890 further Wunderhorn settings followed to complete the last two books of the Lieder und Gesänge.

The music of Mahler’s Wunderhorn songs matches perfectly the fusion of folk-like simplicity and artistic sophistication in Arnim and Brentano’s texts. Some of the songs take popular music as their starting point, for example, the Ländler (Selbstgefühl) or the military march (Aus! Aus!). Others use melodic shapes typical of German folk-song (Um schlimme Kinder artig zu machen), or allude to folk melodies associated with the original text (Zu Strassburg auf der Schanz’). The result is a musical language of extraordinary flexibility which can reflect the humour of Starke Einbildungskraft, the irony in the girl’s responses in Aus! Aus!, and the despair and desolation of Nicht wiedersehen!

Mahler never orchestrated the Lieder und Gesänge, though he began an orchestral version of Zu Strassburg auf der Schanz’. One song did achieve a purely instrumental form: Ablösung im Sommer is the basis of the third movement of Mahler’s Symphony No 3.

Looking back at his student songs, Mahler said in 1896: ‘The songs I wrote at that time were inadequately worked out, as my imagination was still too wild and undisciplined. For it’s the hardest of tasks, and requires the highest art and skill, to achieve something great in a small space.’ The songs of the 1880s show how well he had mastered the miniaturist’s art.