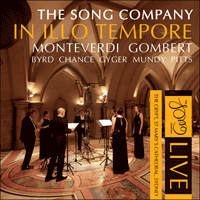 A live programme in three uninterrupted sequences exploring the very different temporal perspectives of the Easter story in glorious polyphony by Monteverdi, based on his musical forebear Gombert, with new Australian motets by Alice Chance and Elliott Gyger, and by Antony Pitts, the new Artistic Director of The Song Company, Australia’s premier vocal ensemble. Recorded in the round in the cavernous acoustics of the Crypt of St Mary’s Cathedral, Sydney.

‘A three-part polyphonic soothing of the soul … the singing throughout was precise and unforced’ (Limelight, Australia)
‘Pitts’ music expanded classic polyphonic vocal textures to incorporate modern harmonies within a broadly consonant framework and an original and sensitive understanding of the voice … this was a concert of rare and transcendent beauty’ (Sydney Morning Herald)
‘From the first intake of breath … I was yet again overawed by the exquisite vocal machine that is The Song Company … clever artistic direction placed Australian composers in amongst the ancient greats … extensive, educative and detailed program notes explained the historic musical journey we were on’ (classikON, Australia)

In illo tempore—In tempore Paschali
The story of Easter is well-known in many parts of the world: there is a day when chocolate is given and received, often in the form of an egg, and—in the Northern Hemisphere at least—delight is taken in the springtime arrival of lambs and bunnies. Of course, these things are connected to the actual historical events remembered at Eastertime: new life and joy at its unexpectedness, and consequent celebration, and then there is the Passover Lamb from the Jewish tradition stretching back well over another thousand years from where we get the word ‘Paschal’ in English as well as the Latin of Gombert’s Mass setting, 'In tempore Paschali'.

But if Easter is about anything, it is the acting out of a cosmic drama, the real stuff of myths, and as in any enduring legend, there are different levels to the Easter story. There are things going on in our earthly sphere—a body is sealed in a tomb and then cannot be found; then there is the world about which we know next to nothing—what happens to the spirit or soul after dying, if anything; and before and around and above all this is what is going on in Heaven, outside Time and beyond our imagining.

Polyphony
Polyphony—the combination of apparently independent voice parts into a harmonious whole—is one of the noblest inventions of the human mind. Polyphonic singing can be heard in many cultures around the globe, but it is the development of musical notation, notably in the Christian Europe of the Middle Ages, that enabled composers such as Gombert, Byrd, and Monteverdi to achieve such remarkable structures in time and sound. Like the different levels in the Easter story, there are multiple temporal layers in any polyphony: from the filigree detail of each individual vocal part to the way the different voices enter and interweave, and then there are large-scale harmonic gestures (notice the sudden tonal shifts in Monteverdi which recur at significant moments in the text), and finally the structure of the liturgy itself—the context for which the polyphony was usually first created.

Programme
The programme on this album is in three parts and with the ensemble singing in a circle in three different configurations: the programme has a beginning, middle, and end; but is also an evocation of three different states or locations, as presented in the piece Thou wast present as on this day—a text for Holy Saturday or Easter Eve with origins in the Orthodox liturgy. In this musical setting the prayer (and much the same music) is heard three times but each time with a different intensity, as three pairs of voices weave an increasingly intricate texture around a luminous major triad. Broken up across the programme, its block chords serve to frame the delicious polyphony around it. Part of the composer’s Requiem for the Time of the End, inspired by the death of Alexander Litvinenko, Thou wast present as on this day celebrates and mourns the past, the present, and eternity together; and the music builds directly on a theme that has resonances in Monteverdi’s Missa In illo tempore.

TOMB
This album was recorded in concert and in rehearsal in the Crypt of St Mary’s Cathedral, Sydney—an appropriate place to remember the burial events at the end of Good Friday. In the first part of the programme an earlier event from the Gospel narratives is remembered in Gombert’s motet In illo tempore, where the Rabbi Jesus’ typically provocative reply is to look to the present and the response of those around to the new challenges before them. Published in 1539, the motet is a fair representation of the golden age of polyphony from Dunstaple to Byrd, and certainly a suitable example for Monteverdi to choose as the model for his Missa In illo tempore, and a fitting name for our album too.

Monteverdi is having printed an a capella Mass for six voices written with much study and toil, since he had to continually manipulate every note through all the parts, always further strengthening the 8 themes from Gombert’s motet In illo tempore. And he is also having printed with it some psalms for the Vespers of the Virgin, with various and diverse manners of invention and harmony, all on a cantus firmus. He intends to come to Rome this autumn to dedicate them to His Holiness.

So wrote Mantuan singer Bassano Casola in 1610. Unlike the Vespers, the Missa In illo tempore is almost entirely ‘prima pratica’, in the contrapuntal style of the previous century. Monteverdi borrows ten motifs and starts to work on them in the Kyrie and the Gloria. And when Casola says 'much study and toil' (Monteverdi also refers to his 'nocturnal labours'): the composer doesn’t leave these motifs alone until he has extracted every last bit of contrapuntal goodness out of them. Designed to put himself in the Pope’s good books, Monteverdi’s Mass was, it seems, sung in the Sistine Chapel, presumably unaccompanied and one voice per part, as was their custom.

The first part of our programme ends in a stiller place—with a contrasting homophonic (meaning all the parts move together) Compline hymn where the fears of night and the ultimate night are banished by appeals to the 'Light of Light'. William Byrd’s Christe, qui lux es juxtaposes at once simple and strikingly colourful chords while the borrowed plainchant tune moves through the parts—as the sun moves across the sky.

HADES
The second part of our Eastertide programme suggests the ‘Harrowing of Hades’: the descent into and return from the place of the departed spirits by the crucified Christ—a return journey celebrated by the labyrinths on the floors of mediaeval cathedrals, and represented in our sequence by two settings of the Nicene Creed around the subdued central section of Thou wast present as on this day. Starting and ending our journey into the depths are bold motets by two Australian composers, Elliott Gyger and Alice Chance. Like Byrd, Gyger borrows a plainchant as the basis of his 'arrangement' of Creator alme siderum and colours it differently for each verse. Chance, who made this version of her And the Lord said, Fiat lux specially for our programme, takes our narrative back to the beginning of Creation and the greatest creative utterance of them all, 'Let there be light!'.

Monteverdi’s version of the Creed has a few surprises after the patterns set up in the Kyrie and Gloria, notably the change in tonality and style at the 'Et incarnatus' section (traditionally the moment of maximum reverence), but also with word-painting delights all over the place. In contrast, the anonymous note-against-note version of the same text provides a much simpler reading of the central text of the Church down the ages: this setting was almost certainly sung at the Easter Vigil, in anticipation of the morning and the Resurrection.

THRONE
The third part of our programme returns to almost entirely unadulterated polyphony where our palettes can hopefully distinguish between different shades of chocolate loveliness—from the joyous craftsmanship of Monteverdi via the chilli fire of Byrd to the laisser-faire imitation of Gombert. Monteverdi’s Sanctus evokes the seraphim calling out eternally 'Holy, Holy, Holy' in the age-old polyphonic way cascading through the skies, but the composer cannot hide his more new-fangled tendencies (the ‘seconda pratica’) in the Benedictus. On the other hand, Byrd takes strict imitation in three parts to an extreme in his Eucharistic hymn, O salutaris hostia, and we hear dissonances hardly found anywhere else in music of his time (perhaps why it wasn’t published in his lifetime).

The two polyphonic Agnus Dei sections from Monteverdi’s Mass are contrasted with one setting by the composer who had inspired him—from Gombert’s Missa Tempore Paschali, and the maestro di cappella adds an extra voice for the final seven-part Agnus Dei. The 400-year-old experiments of Byrd are resurrected in the glorious final section of Thou wast present as on this day, and then we move into the pure light of eternal Day with William Mundy’s In aeternum—who, in his day, was compared as a ‘Moon’ to Byrd’s ‘Sun’, as the two finest composers in town.

Many thanks to John O’Donnell, Barbara Haggh-Huglo, Richard Black, and other editors who have kindly contributed their editions to this program—part of The Song Company’s ‘So Old, It’s New!’ project—they are not held responsible for any further infelicities we may have dreamt up.

The Crypt underneath St Mary’s Cathedral in Sydney is a colourful and evocative space, both visually and acoustically, with rich reverberation designed to enhance sacred singing. This recording was scheduled to document live performances of the programme, but the accommodation of an audience into this relatively intimate space for the first concert dried up much of the open and vibrant sound we had been enjoying during the sound check, so a number of extra mics were added for subsequent performances to restore the sonic character we were seeking. For the most part, the performance placed singers in various positions around a circle in the centre of the space, the exceptions being the anonymous Credo, in which the male singers moved to the north end of the chapel, and Alice Chance’s And the Lord said, Fiat lux, sung by the female singers at the south end. This required placement of microphones to capture these configurations, of course, but also presented an obvious opportunity to make an immersive, surround recording in addition to the stereo mix as the singers moved between pieces to positions around the space and within the audience, rather than being confined to the usual ‘stage’ at one end of the venue. This recording combines this advantage with high resolution capture to give an album rich in sonic detail, and in which the voices combine and interact musically with the acoustic space, yet also retain individual clarity—as can be heard in the stereo mix, but is still more apparent in the surround version as a carefully made immersive recording will always deliver more convincing and vibrant spatial rendering.