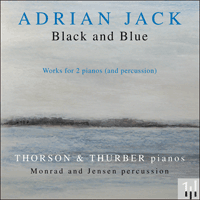 Works for 2 pianos (and percussion)

1equalmusic expands the catalogue with a survey of two-piano works by Adrian Jack, also known as a music critic, scriptwriter for the BBC, and director of the influential MusICA series. The pieces cover a wide range of character from bellicose brilliance to empyrean serenity, and they are played with intensity and total commitment by the duo Thorson & Thurber for whom most of the works were written.

The tracks on this CD follow the order in which the pieces were composed and trace the course, over some fifteen years, of an artistic collaboration with Ingryd Thorson and Julian Thurber, whose enthusiasm and encouragement — not to mention their superb performances — were my main inspiration. Indeed, in the case of Black and Blue (a humorous reference to Debussy’s En blanc et noir), Thorson and Thurber positively demanded more notes. The piece’s somewhat belligerent character could well earn it the description of a ‘bruiser’ and there is just a touch of the blues in it too. Black and Blue was begun in 1988, revised and enlarged during the next two or three years, and given its first performance, in its final form, by Thorson and Thurber in 1993. Cheap Attraction (1990) comes, by contrast, as light relief and was written for a programme that also featured Bartók’s Sonata for two pianos and percussion. I intended to offer no competition with Bartók’s masterpiece. The mood is cool and the two percussionists are employed in adding a light garnish. Tyger! takes its title from William Blake’s famous poem, and was written in 1994 after I had a strange dream in which a real tiger took on the oddly harmless appearance of Blake’s illustration to the poem.

Tia Maria (1994) was suggested by hearing an organ prelude by Saint-Saëns played at an unusually slow tempo, which destroyed its real character and made it seem like a minimalist piece. I have preserved the original accompaniment figuration, and transformed it with a new melodic element rather in the way Gounod’s Ave Maria transformed the first prelude of Bach’s ‘48’. Fling (1997) is a rousing Scottish dance, with the characteristic ‘Scotch Snap’ rhythm. In a concert programme it would proably come at the end, or even be played as a knockout encore. Hagar and the Angel (2001) was inspired by a small and magical painting by Claude Lorrain in London’s National Gallery and also evokes the solemnity of some of Olivier Messiaen’s music. Oriental (2002), which also exists as a bravura organ toccata, is a lightly ironic take on the genre, with distinctive plainchant elements and tiny peremptory fanfares. Wake Up! is permeated with the sound of bells and was written as a concert opener in 2003. The sound of bells is also heard in Between and Betwixt, which were written as a complementary pair in 2004 — a celebration of a long, happy partnership, between the two players, and between them and the composer. Finally, the title of Bleu céleste (2005) evokes one of the most famous pigments of Sèvres porcelain in a mood of empyrean serenity.