born: c1515/16
died: 1565
country: Flanders
Cipriano de Rore (1515/16–1565) is among the great names of the history of the madrigal, the secular genre that came to dominate Italian musical culture in the second half of the sixteenth century. Like other pioneers of the form, he was not Italian but from the Low Countries, being born in Ronse (French: Renaix), on the Flemish–French language border in what is now Belgium. Alongside older Northerners such as Philippe Verdelot (c1480/85–?1530/32) and Adrian Willaert (c1490–1562), Rore blended the contrapuntal complexity of Low Countries polyphonic style with Italian poetic texts to create a newly expressive vernacular genre. As the century progressed, and substantially as a result of Rore’s own innovations, madrigals became increasingly expressive of the poetry they set, and eventually ceased to prioritize counterpoint, declaiming the text in clearer, more homophonic textures, and eventually monodically.

Rore’s entire musical career was made in Italy. It is possible that he was there very early in life, perhaps in the retinue of Margaret of Parma, the illegitimate daughter of the Emperor Charles V, but the first documentary evidence is from Brescia in 1542. The extent and variety of dedications to Italian noblemen among his works of the 1540s suggest a concerted effort to find gainful employment at a court; nearly half of his known compositions date from this early, freelance, stage.

By 1546 Rore had found a position as maestro di cappella to Duke Ercole II d’Este of Ferrara (grandson of Ercole I, around whose name Josquin Des Prez’s famous Missa Hercules Dux Ferrarie was composed). He was to remain at Ferrara for twelve productive years, composing among many other works a Missa Hercules Dux Ferrarie of his own, based on a repeating ostinato motif. He left the service of the Este in 1558, at first temporarily in order to travel to his native Flanders, but in the event permanently, since Ercole’s death the next year resulted in the hiring of Francesco dalla Viola in Rore’s stead. His next, and last, position was at the Farnese court in Parma, where he died in 1565. 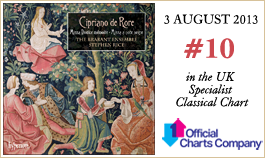