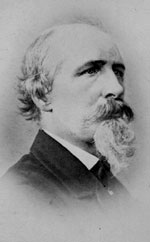 born: 1815
died: 1884
country: Germany
Emanuel Geibel was one of the most popular poets of his generation, though not one of those whose fame lasted into the twentieth century. Even during his lifetime he was regularly attacked by the critics for the sentimentality and superficiality of his verses. He was born into a clerical family in Lübeck, one of eight children. He was an outstanding student who began writing poetry at the age of twenty. He studied theology in Bonn, and then read philology in Berlin where he met Chamisso and Eichendorff. On the recommendation of Bettina von Arnim he spent some time as a private tutor in Athens, his only real personal experience of southern lands it seems. On his return from Greece, still only twenty-five, Geibel published his Gedichte (1840) which was a runaway success, reaching no fewer than a hundred editions by the time of the poet’s death. His great idol was August von Platen, master of metrics; this solid and old-fashioned aspect of his thinking (he was also a political conservative) stood him in good stead with the establishment (by which he was much honoured) but earned him the dislike of his progressive contemporaries.

Geibel’s fame developed steadily. In 1842, at the grand old age of 27, he was given a generous pension by the King of Prussia. The Volkslieder und Romanzen der Spanier were Geibel’s translations of such poets as Vicente and Camoens but also included many texts by unknown authors. (There is a theory that at least some of these unattributed poems are Geibel’s own clever pastiches.) The famous Spanisches Liederbuch (with Paul Heyse as co-author, 1852) was destined to inspire Hugo Wolf to compose his collection of the same name in 1889, some 37 years after those poems were published; but the slender volume of Volkslieder und Romanzen was the direct precursor of the Spanisches Liederbuch – in fact a number of poems which made their first appearance in the Volkslieder were incorporated as part of the later collection.

In 1852 Geibel was invited to Munich by King Maximillian II. There he flourished for sixteen busy years, a member of the elite group of poets known as 'Der Krokodil'. It took war between his Prussian homeland and Bavaria to make the poet return to his roots in 1868. He had become even more politically conservative with the years and he celebrated Bismarck’s foundation of the German Empire in ringing and rather unattractive nationalistic verse. At his death he was still celebrated, also as a man of the theatre. But he was one of those artists whose fame withered with the beginning of the new century. His rather wooden plays now seem unrewarding and very heavy going, but his achievements as a translator remain respected. It was Brahms who leapt to the poet’s posthumous defence when in conversation with Kalbeck. The composer said that Geibel’s critics were ‘wretches’ who ‘eyed askance’ anyone who was old-fashioned enough to be a self-styled troubadour and poetic philosopher. It must be admitted that Brahms and Geibel saw eye to eye on the issue of German nationalism.