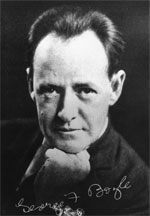 born: 29 June 1886
died: 20 June 1948
country: Australia
George Frederick Boyle was born in 1886 in Sydney to parents who were highly esteemed professional musicians. George was a prodigy who toured extensively in Australia and New Zealand giving piano recitals, as well as composing a number of solo and chamber works, before departing in 1905 to study for five years with Ferruccio Busoni in Berlin, never to return. He had a prestigious career in the USA teaching at Peabody Conservatory of Music in Baltimore (1910–22), the Curtis Institute of Music (1922–4), and the Institute of Musical Art (now the Juilliard School) in New York (1923–40). His students included Aaron Copland and Samuel Barber. He died in Philadelphia in 1948.

As well as the piano concerto, Boyle’s compositions include a Ballade for solo piano (1921), a piano sonata (1925), and a suite for two pianos, as well as many smaller works. His style is essentially late Romantic, and his music contains frequent changes of tempo, key and mood, extensive chromaticism and virtuosic cadenzas, while rhythmic interest is enhanced by the frequent use of hemiolas.