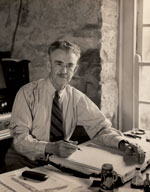 Alfred Hill in his studio in Mosman, Sydney, in the 1930s

born: 16 December 1869
died: 30 October 1960
country: Australia
Alfred Francis Hill was born in 1869 in Melbourne into a musical family that later migrated to Wellington, New Zealand. His obvious talent led to studies in composition and performance from 1887 until 1891 in Leipzig, where he won the the prestigious Helbig Prize. He also played the violin in the Gewandhaus Orchestra when Brahms, Tchaikovsky, Grieg, Joachim, Reinecke, Ysaÿe, Busoni, Sarasate, Bruch, Clara Schumann and Richard Strauss visited as conductors or soloists. Such experiences meant that he was inevitably influenced by eminent Europeans.

After working as a teacher, performer, conductor and composer in New Zealand and Australia, Hill settled in Sydney in 1911; in 1916 he became the founding professor of composition at the conservatorium where he fostered young composers until his retirement in 1935. He was one of the most respected Antipodean musicians of his time and was honoured with the OBE and CMG. Alfred Hill continued composing until his death in 1960. He took a special interest in collecting Maori folk melodies, some of which were incorporated into his music. A well-researched account of Hill’s life is found in the biography A distant music: the life and times of Alfred Hill by John Mansfield Thomson. The critic Neville Cardus rightly described Hill as ‘the grand old man of Australian music’.

Hill’s output was truly enormous. Prior to the completion in 2007 of a thematic catalogue that includes more than two thousand titles, an accurate number of his works was unknown, since the composer had not allocated opus numbers nor kept a complete list. As well as the works on this recording, there are concertos for violin, viola, trumpet and horn, seventeen string quartets, nine symphonies for orchestra, overtures, tone poems, four symphonies for strings, sonatas, a variety of other chamber music, hundreds of songs and piano miniatures, ten operas, film music, choral music including some major works with orchestra and a Mass with organ, arrangements of folk music and a harmony textbook. More than two hundred of Hill’s works were published in the nineteenth and twentieth centuries, especially songs and short pieces for students. New editions of major works have recently been prepared, making much of Hill’s music widely available for the first time. Hill’s compositions feature a wealth of melody, attractive harmony, creativity, playability and audience appeal. While they hold a significant place in the musical heritage of Australia and New Zealand, these qualities ensure a universal appeal.