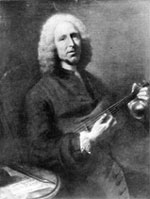 born: 25 September 1683
died: 12 September 1764
country: France
According to one early biographer, Rameau made his operatic debut ‘at an age when the ordinary mortal begins to decay’. This is a slight exaggeration: the composer was, after all, only fifty when his first opera, Hippolyte et Aricie, was first performed in 1733. Yet the statement draws attention to the curiously lop-sided pattern of Rameau’s creative life. Although his compositional activity extended over some six decades, the vast majority of his compositions—including almost thirty operas—belong to the second half of that period.

Born in Dijon in 1683, Rameau spent most of his early life in the comparative obscurity of the French provinces. He began to acquire more than a merely local reputation when he settled in Paris in 1722, publishing his monumental Traité de l’harmonie that year. This epoch-making treatise revolutionized the way in which musicians understood their art and has remained the basis of much of the teaching of harmony ever since.

Yet this reputation as a learned theorist was something of an albatross when Rameau finally plucked up courage to present his first opera. French audiences were initially disconcerted by the forcefulness and complexity of his music, and by what they saw as its excessively Italianate character. While there were some who soon came to terms with the richly inventive new idiom, for others Rameau became a hate-figure, the butt of satirical engravings and lampoons. A dispute erupted between the ramistes, as his growing band of devotees was known, and the lullistes, supporters of the traditional repertory still dominated by the revered though long-dead Lully.

During the mid-1740s, however, Rameau’s colossal stature as an opera composer was more generally acknowledged. After several commissions from Louis XV’s court, among them Platée (1745), he received a royal pension and the title of compositeur du cabinet du roi. By the time Zoroastre appeared in 1749 his works dominated the repertory of the Académie Royale de Musique (the Paris Opéra) to such an extent that one court official forbade the company to stage more than two of them per year ‘for fear of discouraging other composers’.

By the time he died in 1764, Rameau had become the grand old man of French music. His final years were nevertheless bedevilled by controversy. He was embroiled in several pamphlet wars concerning music theory, while during the notorious Querelle des Bouffons (1752–4) this formerly ‘excessively Italianate’ composer found himself under attack by Italophiles as arch-representative (with Lully) of the conservative and, by implication, discredited French style. His penultimate work, Les Paladins (1760), was a flop while his final opera, Les Boréades, was never performed during his lifetime. 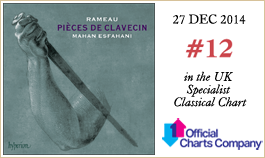