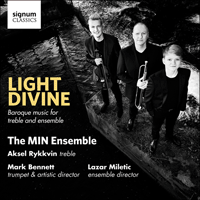 Baroque music for treble and ensemble

A programme of virtuosic set-pieces for treble voice—the wonderful Aksel Rykkvin—and chromatic divertissements captured with boundless enthusiasm by the MIN Ensemble of Norway.

Georg Friedrich Handel (1685-1759) and Jean-Philippe Rameau (1683-1764)—twin musical giants of the 18th century, each the king of his own operatic tradition. Near contemporaries, the two composers both inherited a genre governed by convention and artifice, each bending and softening it into something more mutable, more human, exploiting not only its expressive but its dramatic potential.

The orchestra too was amplified by both, enriched with new colours, instruments and rhetoric, and it’s this particular innovation that emerges most clearly here in a programme that sets music from Rameau’s operas alongside Handel’s concert works, putting solo woodwind, strings and trumpet in the spotlight alongside the solo voice.

Although steeped in the Italian tradition of opera, the Handel we meet here is very much the adoptive Englishman, producing music to serve the tastes and pursuits of his wealthy patrons, works intended to entertain but also to reflect the wealth, taste, nobility and faith of their commissioners. More pragmatically, these were functional works often composed to tight deadlines, as the extent of the composer’s musical borrowings—both from himself and others—makes clear.

We begin with a triumphant trumpet fanfare, with the opening movement of the Concerto in C HWV331—music best known from Handel’s Water Music suite in D. The original suite was famously composed for King George I’s outdoor concert on the Thames, and the punchy brilliance of the melodies was carefully designed to ensure that they carried the long distance to their audience. Handel later created a reworking of this suite featuring Horns in F and here, in this specially arranged version by Mark Bennett, we see the re-emergence of the trumpets, but this time in C major. Cast in three sections, this da capo-like movements sets a minor-key middle section between the blazing joy and energy of the outer parts, built around an urgent dialogue between the trumpet—the instigator of each lively, combative exchange—and the rest of the orchestra.

The later Trio Sonata in G major HWV399 is another musical magpie, this time stealing themes from Handel’s operas and ballet music. The graceful, lilting Passacaille takes its melody from the composer’s 1720 opera Radamisto. Reduced down to chamber forces, the dance’s more questioning, episodic central section gains a new angularity and unmoored interest, while the long melody lines of the outer sections are delicately spun by single strings.

Composed over the course of just 10 days in 1739, the Ode for St Cecilia’s Day is another work that takes advantage of pre-existing material, in this case a set of harpsichord suites by Muffat that are ingeniously reinvented by Handel to quite new effect. Soprano aria 'What passion cannot Music raise and quell' pairs its solo singer with an obbligato cello—an idealised musical portrait of Jubal’s lyre, the 'chorded shell' from which he draws his 'celestial sound'. The exquisite vocal line is, in many ways, simply a foil for the gilded, filigree ornamentation of the cello writing, which embellishes without ever weighing the melody down.

The relationship between solo voice and obbligato trumpet in the composer’s 'Eternal source of light divine' is a very different one. The trumpet may echo and amplify the singer, but remains a supporting player rather than an equal in this striking lovely opening movement from Handel’s Ode for the Birthday of Queen Anne. In contrast to the dramatic da capo aria, thriving off contrast, this through-composed piece maintains its rapt mood and dignified pace throughout, unfolding in a single, glowing musical arc, like a beam of light pouring through a stained glass window.

But if Handel’s time in England focused his talents in a new direction, his musical style remained indebted to his time spent travelling in Italy. The secular cantata Diana Cacciatrice, probably composed in 1707, was written at the request of Handel’s friend and patron the Marchese Francesco Maria Ruspoli and premiered privately at his country Palazzo outside Rome. The Marchese was an enthusiastic hunter, and though the cantata nominally celebrates Diana, goddess of hunting, in its martial rhythms, galloping semiquavers and horn-calls (rendered by a solo trumpet rather than a horn) it’s also an elegant homage to Ruspoli himself.

The trumpet is also at the fore in Tomaso Albinoni’s 'Vien con nuova orribil guerra'. Although the prolific composer produced over 50 operas for the Venice, only two survive complete, including La Statira—the source of this rousing martial aria. Written for the 1726 Carnival season, the opera explores the rivalry between Statira and Barsimo as they do battle for the Persian throne. Throwing down the gauntlet in rippling semiquaver runs, the aria threatens war in the most elegant of musical terms. The white brilliance of the C major key allows the trumpet—both the voice’s support and its musical rival—to shine brightly, disappearing in the brief central section only to return with renewed impact for the da capo.

An instrumental divertissement comes in the form of Czech composer and priest Philipp Jakob Rittler’s charming Ciaccona. Growing from a simple ground bass that circles gently in continuo instruments, the work expands outwards, adding ever thicker and more exuberant instrumental embellishments from trumpet and strings, to turn a graceful dance into an ecstatic musical celebration, before reversing the process and dying away to nothing.

Rameau came late to opera. It was only in 1733, at the age of 50, that he composed his first. Hippolyte et Aricie startled its Parisian audience with its unfamiliarity, its harmonic and textural innovation, and while some dismissed it as a mere technical experiment by a musical theorist, and some as 'a perpetual witchery', others recognised and admired its new dramatic breadth and boldness. Composer Andre Campra even went so far as to declare, prophetically, that, 'There is enough music in this opera to make 10 of them. This man will eclipse us all'.

And so began as astonishingly rich and fruitful late-flowering of stage works wedding the musical fluidity of French baroque with the orchestral weight and interest of Italian opera, taking a divertissement and amplifying it into a music-drama.

The orchestral episodes included here illustrate perfectly how Rameau took the dance movements that had always decorated French opera and made them part of the unfolding psychology of the piece. Frowning bassoons—Rameau’s own instrument, and one the composer wrote for with unique creativity, elevating it from mere bassline support to something much more characterful—introduce the angular theme of the Ritournelle’s stiff, fugal dance from Hippolyte et Aricie, followed and imitated by the rest of the orchestra. Their sombre mood reflects the turmoil of the despairing Queen Phedre, overcome with illicit desire for her stepson. Also in despair, Abaris has given up hope of being united with beloved Alphise. The bittersweet Entrée from Act IV of Les Boréades, coloured similarly by bassoons, sees him on the brink of suicide, the tumbling string phrases trickling down like tears.

Despair turn to horror in the Air Grave from Act IV of Zoroastre. A jagged descending string figure carves out the start of the movement like a lightning bolt through the sky, conjuring the horrifying spectacle (which would have been depicted by dancers in this 'ballet figure') of the spirits of Hell, summoned by Vengeance. Even the lighter, comic Platée is charged with musical drama, including the storm that gusts through Act I, summoned by the vengeful Juno in fitful gusts of flute and strings that surge and snatch their way through this musical episode.

Telaire’s lament 'Tristes apprêts' from the final act of Castor et Pollux is one of Rameau’s greatest arias. A picture of grief at its most poised and contained, the power of the aria lies precisely in its restraint, its refusal to rage and vent. Faced with the death of her beloved Castor, Telaire stands in front of his funeral monument and contemplates her loss in music whose apparent harmonic stillness on the page translates to something much more unsettled on the ear—chromatic shifts of key constantly implied, but never fully realised. Bassoons, often crooning high in their register, once again add their plangent, wordless voices to the soprano—an echo, perhaps, of the voice of Castor himself?

'Je ne sais quel ennui me presse' from Naïs—Rameau’s 1749 pastorale héroïque—is an altogether lighter affair. Even the opening bars, with their distinctive bagpipe-like colouring and sustained drone, establish us far from the central musical drama with its elevated passions of courts and princes. The singer is a young shepherdess, who asks the seer Tiresias to prophecy whether she will find happiness in love. Her innocent request is reflected in an aria torn between the repetitive simplicity of a nursery rhyme and the energy of a lively country dance—an entire character-portrait in musical miniature.

One of the grandest and most extended dances in Rameau’s operas, the final Chaconne from Les Indes galantes is also one of the greatest—the movement that, in so many ways, anticipates the future of opera. Dance, here, is no longer an interlude, but a coherent and continuing part of the musical narrative, painted in the colourful detail and episodic structure of this great closing movement.

Aksel and I first met in the Oslo Chamber Music Festival in 2016. Aksel had already recorded his first album in the UK with the Orchestra of the Age of Enlightenment and had performed some of the more well known music for soprano and trumpet.

We worked together on a few more projects and continued to play these same pieces. A few months later I was given some opportunities to direct and lead my own productions and I invited Aksel along.

I started to introduce new repertoire to Aksel and he just seemed to thrive on this challenge. Projects with The Norwegian Radio Orchestra and the Oslo-based period instrument orchestra Barokkanerne early in 2017 were incredibly successful, and even though Aksel’s voice was changing all the time, I took the chance to invite Aksel again for one last project up in the north of Norway with the MIN Ensemble in Narvik.

We had a great time and everything just felt so natural. Aksel and I casually mentioned to Lazar, the artistic leader of the MIN Ensemble, that we would have loved to have had the chance to record some of this new repertoire. He replied with a definite offer and 6 weeks later there we were—in Jar Kirke, Oslo, making it all happen. Despite the issues of summer holidays and various summer festivals, it just all fell into place. It was a miracle.

The MIN Ensemble, although a modern instrument group, were enthusiastic about my more early music approach. With a mixture of modern and baroque instruments we feel very proud of the end result.

For me, the approach to the music and not just the instruments, has always been 90% of playing early music. We made a compromise with only baroque trumpets, baroque flute, lute and harpsichord, mixed with modern strings, oboes and bassoon. We feel that we have bridged the gap to make this amazing music dance off the page.