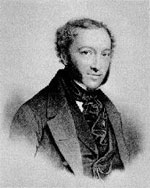 born: 23 May 1794
died: 10 March 1870
country: Germany
Ignaz Moscheles (1794–1870) was a cosmopolitan virtuoso whose long career spanned the greatest period in the development of the piano, from Beethoven to Liszt. In this development he played an important part, which is now slowly coming to be appreciated after a long period of neglect.

Stemming from the German-speaking Jewish community of Prague, he emerged as a new star at the age of fourteen, when he played a piano concerto of his own in public. Soon he embarked on a career as a freelance musician in Vienna. In a short time he became well known throughout Europe. In 1821 he paid his first visit to London, which became his home for more than twenty years. In 1846 Mendelssohn, his intimate friend and colleague, appointed him the principal teacher of piano at the recently formed Leipzig Conservatorium. There he passed on his knowledge and vast experience to a new generation.

Moscheles’s younger days were spent in an age when the piano was the ‘hot’ new instrument. Its role in society was comparable to that of sound recording in the later twentieth century. Every few years technological improvements were marketed by rival manufacturers, increasing the instrument’s pitch range, rapidity of execution, volume, and expressive powers. Every middle-class family wanted its children, especially daughters, to excel at this exciting instrument. The models (and often the teachers) for these young people were the glamorous virtuosi of the concert platform, who also grew in numbers and in the intensity of their rivalry. Their main vehicles for public performance were the concerto and the single-movement work for piano and orchestra. (Sonatas and other solo pieces were rarely included in concert programmes before the 1830s; the first full-length solo recital was given by Liszt in 1840.)

Under these circumstances it is not surprising that the piano concerto became more and more of a showpiece, each one striving to surpass its predecessors in brilliance and apparent difficulty. Though the classical framework established by Mozart was still there, certain parts of it were expanded and overloaded far beyond the bounds of classical restraint. In particular, the first movement always contained two long drives towards a climactic cadence, one in the dominant or other complementary key, the other in the home key (tonic). In these sections the soloist led the orchestra in a stampede of spectacular technical display to the predictable climax, ending on a series of trills; the orchestra then hailed the triumphant hero in a loud and brilliant affirmation of the established key. The second of these concluded the movement. The finale, generally a rondo, contained similar passages and further opportunities to make the audience gasp. Other parts of the concerto, including the middle (slow) movement, displayed contrasting facets of both the instrument and the composer/performer, often showing the piano’s potential for lyrical expression, and sometimes containing witty exchanges between piano and orchestra.

Among the many famous virtuosi of the 1820s—Hummel, Kalkbrenner, Cramer, Herz and Weber were his most famous rivals—Moscheles stands out for two features: classicism and originality. These qualities might seem to be opposites; but the ‘classical’ concertos of Mozart and Beethoven are full of surprise, intellectual challenge, and emotional depth that were all too often lost in the cascades of virtuosity that overwhelmed their successors. Moscheles, brought up on the works of Mozart and Clementi, never wholly abandoned these qualities. Even his seemingly mechanical passagework often uses unfamiliar patterns of figuration.

from notes by Nicholas Temperley © 2002