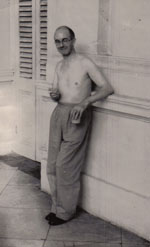 Erik Chisholm during a rehearsal break in Singapore

born: 4 January 1904
died: 8 June 1965
country: Scotland
Erik Chisholm was born in Glasgow and brought up in what might be described as a conventional middle-class household; but it was hardly conventional of his parents to allow him to leave school at the age of thirteen to pursue composition, piano and organ, later studying and living with the leading Russian pianist Leff Pouishnoff. From the early days Chisholm was exploring the latest repertoire, premiering Bartók’s first Piano Concerto in Glasgow (accompanied on the organ, faute de mieux!), and also giving Musorgsky’s Pictures at an Exhibition its Scottish premiere. Despite differences of opinion about Chisholm’s more modernistic tendencies, Pouishnoff was more than willing to recommend Chisholm for a degree course at Edinburgh University: ‘I beg to certify that Mr Erik Chisholm has studied with me the art of piano playing for a number of years and that in the course of our work together he proved to be the possessor of a keen brain and highly developed intelligence … I may add that my opinion of him as a musician is of a very high degree.’

Chisholm obtained his Doctorate in music under the tuition of Donald Tovey. A fine pianist, Chisholm’s understanding of piano texture and technique is evident in all his piano works, from the simplest to the most virtuosic. He was also an outstanding organist and an innovative conductor and concert promoter. In Glasgow he gave Mozart’s Idomeneo and Berlioz’s The Trojans their British premieres and, amongst others, he brought Hindemith, Casella, Szymanowski, Schmitt, Walton and Bartók to the city. He was dubbed ‘MacBartók’ not because his music could ever be confused with Bartók’s, but because he was pursuing a similar compositional course in his handling of Scottish traditional music as did Bartók with the Central European tradition.

Chisholm had started composing variations on Scottish folk-tunes at the age of six, but it was at the age of ten that he was given a copy of Patrick MacDonald’s A Collection of Scottish Airs published in 1784. So influential was this gift that scarcely a single one of the two-hundred airs remained unarranged by Chisholm in one form or another. Patrick MacDonald was not Chisholm’s only source of Scottish traditional music, and he made use of early Scottish lute manuscripts and many published sources, and had a broad knowledge of pìobaireachd (pipe music), examples of which were published in MacDonald’s collection.

While Chisholm’s primary influence was that of his own native music, he was also greatly influenced by Hindustani music, following his friendship with Kaikhosru Shapurji Sorabji, and a period of service in the Far East during the Second World War. He founded a symphony orchestra in Singapore, and from there went straight to Cape Town, where he was Professor and Dean of the Faculty of Music until his untimely death. 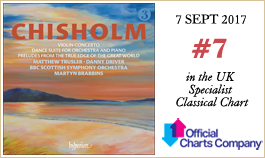 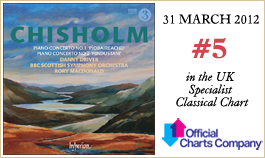