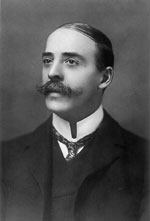 born: 29 January 1852
died: 6 October 1935
country: United Kingdom
British music in the last quarter of the nineteenth century was dominated, until the emergence of Elgar at the end of Queen Victoria’s reign, by five composers: Stanford, Parry, Mackenzie, Sullivan and Cowen. Sullivan has always been recognized as the composer of the Savoy operas, and over the last couple of decades his other music is being revived. Parry and Stanford had been long-remembered for their church music and have enjoyed a growing revival over the last twenty years or so. Mackenzie, too, has been heard again (his ‘Scottish’ Concerto—a notable precursor to Somervell—can be heard on Hyperion CDA67023), but the once-popular and widely played music by Sir Frederic Hymen Cowen has largely remained unheard, silenced by that sudden dramatic change of aesthetic and idiom after the First World War.

Frederic Cowen had the good fortune to be the son of the private secretary to the Earl of Dudley, who was also the Treasurer of the Italian Opera at Her Majesty’s Theatre. Thus the boy moved in very musical circles and even as a child his musical gifts were encouraged with the best teachers and with every opportunity to play with leading musicians of the day. Cowen was actually born in Jamaica but came to England when he was four. As a wunderkind child pianist he first appeared in public at the age of ten and played the Mendelssohn D minor Piano Concerto when twelve. He subsequently studied in Germany, first in Leipzig and later in Berlin. He met Liszt and Brahms and was launched on a career as a piano virtuoso in his teens. A life touring with various artists took him round the UK and to Europe and the USA. He emerged as one of the leading British conductors of his day and became the regular conductor of the Philharmonic Society in 1888. He achieved some celebrity when he was appointed conductor of the Melbourne Centennial Exhibition, also in 1888, for the unheard of fee of £5000.

Cowen’s Third Symphony, the Scandinavian of 1880 (the first two are lost), did much to establish British Victorian music on the European stage. He went on to write six symphonies. His choral works were widely heard at festivals. His ambition to write operas saw five presented on the London stage, but his D’Oyly Carte commission to produce a successor to Sullivan’s Ivanhoe, the verismo Signa, failed because it was not ready when the run of Ivanhoe ended earlier than expected. 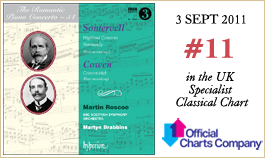