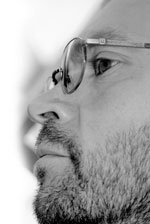 ‘Just as everyone has their own pathway to God, so every composer has his own pathway to emotion in music, and through that—also to God.’ (Rihards Dubra)

Rihards Dubra has emerged from the largely secular tradition of choral music-making in Latvia as a distinctive voice, that of a composer devoting himself exclusively to the composition of sacred music. The purity of this endeavour is one that Dubra has admired in the work of so-called ‘holy minimalists’ such as Arvo Pärt and John Tavener. Dubra prefers to describe his own music as ‘a style of meditation’—one instilled with the essence of the Middle Ages ‘through the view of a man who lives in the twenty-first century’. All Dubra’s music, be it vocal or instrumental, is shaped by his own faith and is the result of a deeply spiritual desire ‘to write truthful and emotional music’. Therefore, Dubra explains, ‘as faith is the only purity in this world, I cannot imagine anything better than to write only sacred music’. It is his resolute faith that provides the energy and inspiration to compose, to the extent that Dubra has said: ‘I doubt that the energy I feel inside me is mine. I do not create music—I just write down what has been sent to me.’

Latvia, like its neighbouring Baltic states of Estonia and Lithuania, was dominated by foreign powers right into the latter half of the twentieth century. The indigenous population did not have access to professional music-making, yet was always united through the expression of folk song. As Latvia began to assert its independence it was these national songs that drew its people together and, as a result, choral music became the most dominant musical genre. From 1940 to 1990, when the country suffered the restrictions of Soviet occupation, large song festivals and choral singing in general played a crucial role in rallying, strengthening and inspiring the people. Singing remains central to the cultural life of this small nation.

Rihards Dubra was born in Riga on 28 February 1964. Although the maternal side of his family were Lutheran (the most prevalent denomination in Latvia) Rihards was raised as a Catholic by his grandparents. Under the Soviet regime any public performances of sacred music constituted religious propaganda and were not permissible. Catholicism itself was tolerated but worship was by necessity discreet. Consequently when Dubra became interested in writing music (at the age of ten) his exposure to church music was very limited. His studies began outside Riga in Jurmala, and then at the Emils Darzinš College of Music, where his teachers in composition were Jazeps Lipšans and Gederts Ramans.

During his studies with Adolfs Skulte at the Latvian State Conservatory, Dubra began to test the boundaries of political acceptance in the last remaining years of Soviet rule. Even a determination to title a work ‘Christmas Trio’ caused confrontation with authorities and was deemed unacceptable. ‘At that point’, Dubra says, ‘I realized the direction I wanted to go in.’ He graduated in 1989 with a symphony the title of which can be translated as ‘The beginnings of consciousness’. Further studies at the Latvian Academy of Music under Juris Karlsons earned him a master’s degree in 1996.

Even before 1990, Dubra had begun to set liturgical texts in Latin, although these works were conceived for concert audiences whose experience of sacred music was not informed by any theological or liturgical understanding. The traditional approach of illuminating individual words or phrases from the biblical text would therefore be largely meaningless in this context, which is why Dubra prefers to take listeners on a spiritual journey. ‘People should not always understand the text exactly because its meaning is encoded in the music … my main task is to work on people’s subconscious level, people’s emotional level.’

Dubra teaches harmony and composition at the Jurmala School of Music and is Cantor of the Church of Mary Magdalene in Riga. He is also involved with a number of choirs, particularly as a bass and founder of the Schola Cantorum Riga. He receives regular commissions from music festivals and ensembles and his music is widely performed around the world. His Te Deum, composed in 2002, won him the Latvian Great Music Prize and the Cantata in Nativitate Domini was simultaneously broadcast all over the European Union in 2005.